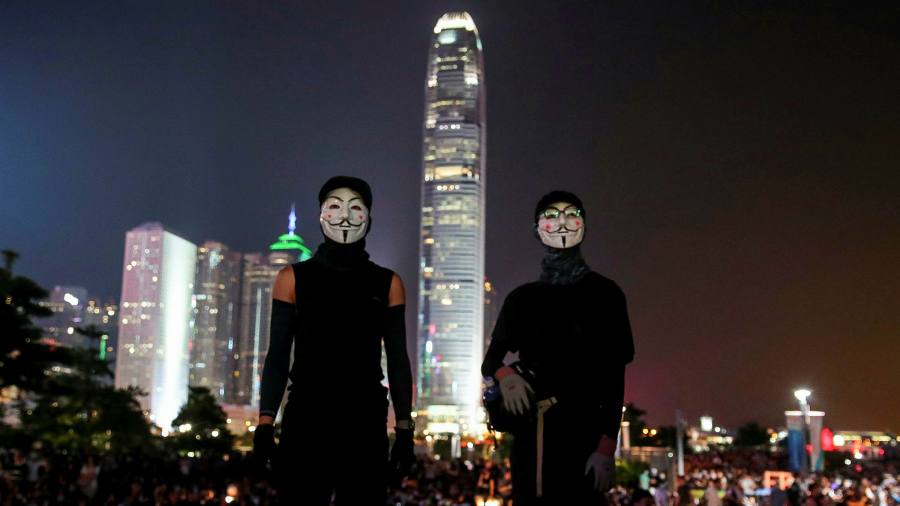 Hong Kong protesters are donning disguises, including Guy Fawkes masks inspired by anarchist comic book V for Vendetta. An emergency ban on face coverings is predicted. Intensifying civil rights protests are spooking analysts as well as the Hong Kong government. Warnings of capital flight and further equity sell-offs are proliferating. These are overdone.

Hong Kong dollar deposits posted a record monthly drop in August. Up to $4bn went to Singapore, according to Goldman Sachs. But such declines are still a small fraction of the dips seen over the past two years. Foreign exchange reserves logged a record high in July, making comparisons deceptive.

Hong Kong’s benchmark Hang Seng index has fallen 13 per cent from its April peak. But the worst may already be priced in. The price-to-earnings ratio has dropped to 10 times, near its levels during the pro-democracy protests in 2014, before the index rebounded by a quarter.

The decline has created a price discrepancy between dual listings. The Hong Kong-listed shares of Citic Securities and Ping An Insurance are comparative bargains.

Property developers have been badly hit. They now look oversold. Their pricey retail spaces are mostly rented out on long-term leases. Footfall can plummet periodically without damage to short or medium-term earnings.

Retailers remain heavily exposed. Retail sales in Hong Kong fell by a record figure in August. Hardest hit were stores dependent on mainland visitors, who have been staying away. The shares of cosmetic retailers Bonjour and Sa Sa International are down over 40 per cent this year. Chow Tai Fook, a jewellery retailer, has seen its stock drop by a fifth.

Store operators will struggle while protests continue. More are planned for the coming long weekend. The fictional repressions of V for Vendetta could happen for real in Hong Kong. But a sober middle scenario points to political and financial stabilisation, if China continues to play a long game. Analysts, who normally underestimate political risks, exaggerate them in crises. Hong Kong is a robuster proposition than pessimists say.