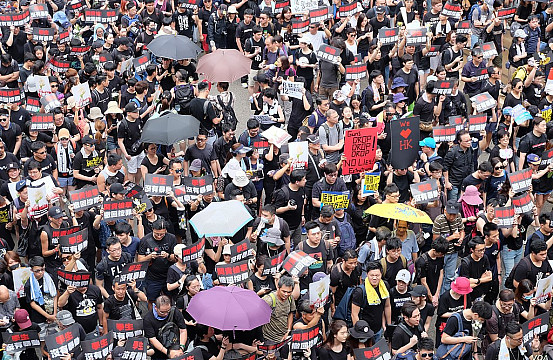 Hong Kong is waiting tentatively for the next chapter in the clash of wills over the erstwhile extradition bill proposed in February by the government. Demonstrations against the bill, which is widely seen as a further encroachment on Hong Kong’s self-rule, and a potential mechanism that would allow Beijing to extradite political prisoners, have drawn crowds of up to 2 million. Violent clashes have occurred. While a lull is at hand, it is worthwhile to review the history of protests, demonstrations, and even riots that the former British colony has experienced in its unique modern history, to look for some sign of how the past may predict the future.

Indeed, perhaps that history can tell us something about who the people of Hong Kong really are.

The overarching themes that tie together the history of the Hong Kong people’s multiple occupations of the streets of their dynamic city are a demand for justice, and for promises made to be promises kept. The citizens of Hong Kong, since its return to Chinese sovereignty in 1997, have been particularly keen to hold Beijing to its word, and to protect basic rights of freedom of speech, assembly, the press, and self-determination.

But before Beijing, there was life under British rule. In 1967, what began as a labor dispute at an artificial flower factory quickly led to pro-Communist riots and violence, which debilitated Hong Kong for much of the 18 months that followed. Occurring at the height of the Cultural Revolution that was ravaging the mainland, and leading to acts of outright terrorism, the call for Communist organizers in Hong Kong to cease action eventually came from none other than Zhou En-lai, Mao Zedong’s premier and right-hand man.

The fuse that lit the 1967 explosion of anger in Hong Kong had had its roots in the colony’s rapid growth at the expense of cheap labor. Hong Kong’s population grew by three-and-a-half times just in the six years following the end of the World War II in 1945. During the first four of those years, the mass influx was fueled by people motivated to escape the brutal civil war in China between Chiang Kai-shek’s Nationalist government and Mao Zedong’s Red Army revolutionaries.

Then, from 1949 to 1951, the then still-British colony experienced waves of Chinese pouring in from the newly established People’s of Republic of China as mainlanders sought to flee the consequences of Mao’s victory and the communist government he installed.

Adding 1.5 million people to its population of 600,000 fueled social upheaval and further migration, but also laid the groundwork for Hong Kong’s development into a world-class economic powerhouse.

In the beginning, however, most Hong Kongers were poor, a word not closely associated with Hong Kong these days. In the 1960s millions of the colony’s residents lived in shanty towns, which had neither bathrooms nor plumbing. Working conditions were often squalid. Hong Kong factories began to be referred to as sweatshops.

Nonetheless, the immigrants, despite living in conditions of bare subsistence, but also largely without formal education, exhibited a strong sense of injustice, and fought for labor reforms.

Unfortunately, that sense of right and wrong went out of control for some; the movement was hijacked by radical leftists from both the PRC and from within Hong Kong itself.

The period changed Hong Kong irrevocably, say many of those who lived through it.

“The Hong Kong nationality was first developed in 1967,” says Ching Cheong, chief correspondent in China for The Straits Times. “Before that incident, Hong Kong was a borrowed place on borrowed time but, after the riots, people knew that Hong Kong was their home and that they wouldn’t return to China anymore.”

Cheong has had his own life challenged by forces in Beijing, having spent nearly three years in prison in China on claims of spying for Taiwan, a charge he adamantly denies.

That sense of Hong Kong identity has been on display ever since.

In 1989, after the Tiananmen Square massacre in Beijing, which left thousands dead, Hong Kongers came out in force, and have continued to rally each June 4 since.

Hong Kong then lurched toward what, for many, was an unthinkable inevitability as negotiations between the United Kingdom and the PRC determined Hong Kong’s destiny, with little say from Hong Kong itself.

The eight-year lead in between the Tiananmen Square massacre in Beijing in 1989 and the looming 1997 handover of Hong Kong’s citizens to the government many called “butchers” felt to many in the colony like a long, slow stint on death row.

Hong Kongers’ identity, separate and distinct from the mainland and from their many forebears who had come from China, was solidified by Tiananmen. Most could tell you where their laojia, “old home,” in China was, but few had ever been, and many were reluctant to risk it. Stories abounded of people who had made the trek from Hong Kong into rural China to see long-lost relatives, only to find themselves besieged and even intimidated by requests for money. The long-awaited unification, much to Beijing’s chagrin did not erase the psychological distance between Hong Konger and mainland Chinese. And it certainly didn’t end Hong Kong’s activism.

Six years after the handover, in 2003, hundreds of thousands of Hong Kong residents demonstrated against the passage of a national security law that it was feared would curtail free speech. The bill was shelved, and the pro-Beijing chief executive of Hong Kong, Tung Chee-hwa, later resigned (nonetheless maintaining significant influence in Beijing, Hong Kong, and abroad).

In 2012, students demonstrated by the thousands in protest against a national education program that would glorify China’s Communist Party system, and call into question democratic and republican ideals.

And then, five years ago, Hong Kong reacted again. In what became known as the Umbrella Movement, the people of Hong Kong occupied the city center from late September to mid-December of 2014 in response to Beijing’s decision to renege on its earlier promise of universal suffrage and open elections.

Hong Kong’s intrepid demonstrators, from offering memorials to those who died in Beijing in 1989, to the Umbrella Movement in 2014, and now through to the protests over the extradition bill that Hong Kong has seen in recent weeks, easily call up comparisons to David and Goliath, as well as to the paltry forces of the Greeks facing down the million-man army of the Persians at the pass of Thermopylae. Perhaps the latter is more pertinent.

A city, once a colony of the most powerful empire on the planet, again finds itself standing toe-to-toe with one of the superpowers of the modern day.

In the case of Thermopylae, the small band of Greek Spartans were vanquished, but their armies were eventually victorious. Xerxes of Persia never conquered Greece.

In the 22 years since the 1997 handover of Hong Kong back to China, the Chinese government has managed to persuade a large swath of the Hong Kong population that they may have been better off with the old empire than they are with the new one.

And if history is any guide, Hong Kong will not be quiet about its preferences from here on out.