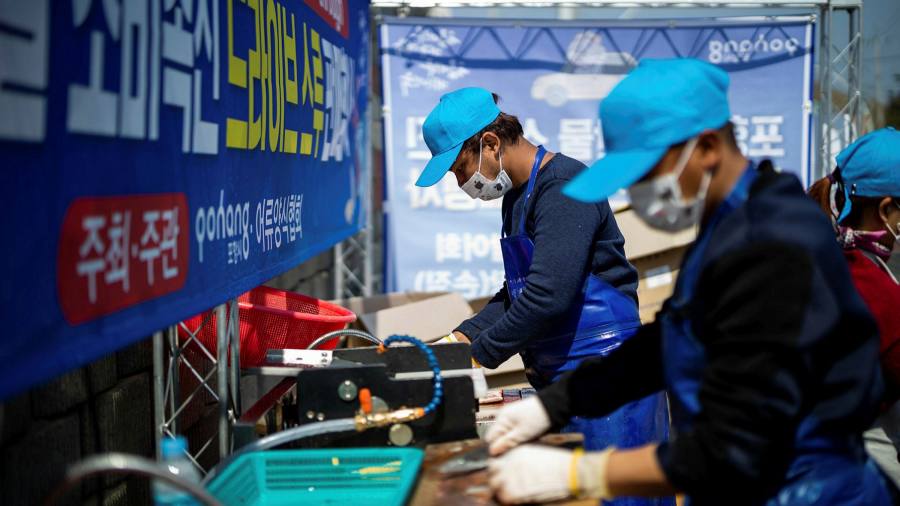 For two months, policymakers in the Asia-Pacific region have been at the frontline of the battle against the economic fallout from the coronavirus outbreak. While their tactics have often been less dramatic than the “bazooka” measures deployed in Europe and the US, they have still often involved cuts in benchmark interest rates to record lows and stimulus packages of unprecedented size.

Early indications from the region are that the most effective measures are generally those carefully aimed at preserving jobs and businesses while maintaining liquidity in important financial markets.

How have investors responded?

Investors have generally been underwhelmed by the government response in the region. Australia has unveiled three consecutive economic stimulus packages over the past two weeks, consisting of monetary and fiscal measures worth A$189bn ($113.8bn) — equivalent to a 10th of its economy.

But despite the RBA also cutting interest rates to a record low of 0.25 per cent, the S&P/ASX 200 index has lost about 30 per cent of its value since its highs in late February.

South Korea faced the first large outbreak outside of China leading the government in February to announce a record stimulus package and new tax breaks to buffer the worsening fallout on Asia’s fourth-biggest economy.

But the measures did not stop foreign investors from selling a net Won10.7tn ($8.6bn) worth of Korean shares so far this month — a monthly record since data started in January 1999 and higher than Won8.7tn in August 2007 in the global financial crisis.

With both the Korean won and the benchmark Kospi stock index slumping to 10-year lows, and amid worsening turmoil in the financial markets, Seoul has expanded its economic support package by nearly $80bn, with cash for businesses and new funds to support bond and stock markets.

“It is hard to say whether this is enough for economic recovery for sure but the government has clearly shown its determination to stabilise financial markets,” said Park Seok-gil, an economist at JPMorgan.

How does China’s response compare?

While western policymakers, such as the US Federal Reserve and the European Central Bank, have thrown everything at the crisis, China’s response so far has been relatively subdued.

The People’s Bank of China has signalled it will only gradually lower interest rates in the coming months. It has also cut the reserve requirement ratio for banks, allowing many of the country’s financial institutions to lend an additional Rmb550bn ($79bn) collectively. China is also discussing a savings deposit rate cut that would free up banks to lend more.

But more will be needed to resurrect growth, given estimates from banks such as Nomura of a 9 per cent year-on-year contraction this quarter in China’s gross domestic product.

With the promise of more to come from the PBoC, Chi Lo, senior economist for greater China at BNP Paribas Asset Management, argues that sentiment in the country has improved. The Fed’s use of quantitative easing was less effective in shoring up market sentiment than the PBoC’s open-ended approach.

“Given the chaos stemming from the global Covid-19 outbreak, the Fed may have to move to increase the size of the new QE programme or to an open-ended programme as the situation evolves,” he said.

Will the measures actually work?

Some analysts say the best economic relief plans are those supporting small- and medium-sized companies. Other experts say the main goal should be to keep banks lending and avoid cash crunches.

“Just based on past experience, China is usually quite effective in mobilising banks to lend out more and to accelerate infrastructure investments,” said Kelvin Lau, senior economist for greater China at Standard Chartered.

Singapore in February announced a S$6.4bn ($4.6bn) stimulus package, of which two-thirds was aimed at protecting jobs and helping companies struggling with operating costs and cash flow. The rest was for the ministry of health and to help households meet the costs of living.

Hong Kong has taken a similar approach. A HK$30bn ($3.9bn) fund has been launched to distribute financial subsidies to eateries, travel agencies, retailers and other industries that are directly affected by the outbreak. Adult permanent residents of the territory are also to each receive a cash handout of HK$10,000.

Yet even this may not be enough given the scale of the collapse in activity, economists say. “The small businesses will want more,” said Tommy Wu, a senior economist with Oxford Economics. “But I think the economic reality is actually difficult for the government to save all the business, especially given that now all the businesses are affected.”

China Is Not Replacing the West in Serbia

What Is definitely the Biology Definition in the Dynamics of Life?

Standard Info on Kaletra – Is Your Liver disease C The consequence of Virus?