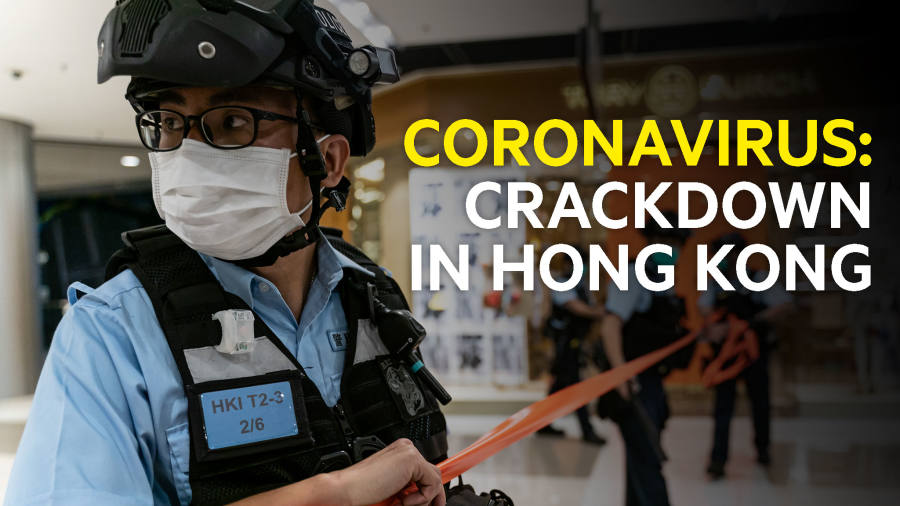 SPEAKER 1: We begin with breaking news out of Hong Kong, which has reported its first death from the coronavirus.

LESTER HOLT: Tonight, over a million confirmed cases in America.

SPEAKER 3: Whilst the first human trials for a vaccine are due to start today.

SUE-LIN WONG: While the world is distracted by the pandemic, Beijing has ramped up the pressure on Hong Kong’s pro-democracy movement. 15 of its most high profile members have been arrested for unauthorised assembly. The FT spoke exclusively to the two most prominent, Jimmy Lai, owner of the anti Beijing newspaper Apple Daily, and Martin Lee, Hong Kong’s so-called father of democracy. We talked about what this clampdown means for the future of Hong Kong and why Beijing is coming after them under the cover of coronavirus.

JIMMY LAI: The aftermath of coronavirus is going to be very bad situation internationally for China. So they– maybe they reckoned that, well, it’s going to be so bad anyway, you know, it can’t get worse.

MARTIN LEE: And they took this time to do this thinking, no doubt, that all these foreign countries will be so busy taking care of their people because of this virus.

SUE-LIN WONG: Both pro-democracy activists say that the seriousness of their arrest is nothing compared to other things that Beijing is doing in the city.

MARTIN LEE: What we were promised, under the joint Sino-British Joint Declaration, was that the people of Hong Kong would be administering Hong Kong with a high degree of autonomy. Now it’s completely changed. Now the central government administrating Hong Kong with complete control.

SUE-LIN WONG: Last year, protests rocked Hong Kong to its core. Now, ordinary people are too scared of coronavirus to demonstrate in numbers. But the discontent that saw millions March through these streets hasn’t disappeared. It could easily erupt again.

Beijing blames the unrest on meddling foreign powers. But many Hong Kongers say that they will continue to protest as long as the city’s unpopular government appears to be taking direct orders from Beijing.

SUE-LIN WONG: In September, Hong Kongers will go to the polls in parliamentary elections. Beijing is desperate to avoid a repeat of last year’s local council elections, which saw overwhelming support for the pro-democracy camp.

MARTIN LEE: You can expect they will stop at nothing. They will try to disqualify legislative councillors now. And even if you win the election, if they do not challenge a nomination, they will think of reasons again to disqualify you.

JIMMY LAI: I think the moderate is the force they are afraid of, because this is most of the people. And that’s why they try to intimidate the moderates.

SUE-LIN WONG: Beijing’s tactics to erode Hong Kong’s autonomy took on greater urgency after Xi Jinping took over as president in 2013. Now that policy is closing in on its target.

JIMMY LAI: And Xi Jinping, his way of doing things is push it to the end. He never stop halfway. It all depends on how much support we get from the international community.

SUE-LIN WONG: With the world distracted by coronavirus, Beijing appears to have calculated that the international community, and America in particular, is unlikely to take a stand.