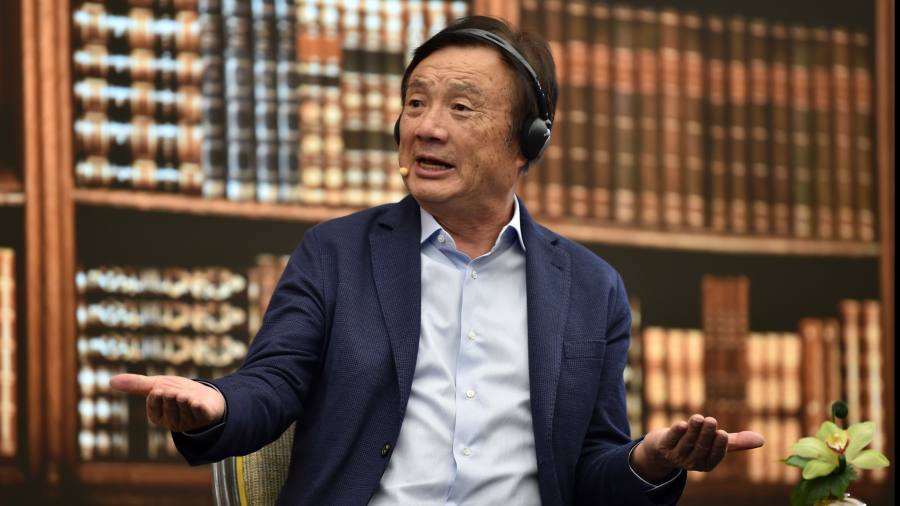 Huawei’s international smartphone sales fell 40 per cent last month compared to the month before, as the Chinese telecoms equipment maker grapples with the fallout of the US government’s move to cut off critical suppliers.

Ren Zhengfei, founder and president of Huawei, confirmed the sales drop on Monday, as he cut the company’s revenue forecast for this year by around $20bn, and said it would scale back production.

“Over the next two years, the company will reduce production. We estimate we’ll reduce production by $30bn,” Mr Ren said at a panel discussion in Shenzhen. “This [calendar] year and next year, our revenues will be around $100bn.”

Mr Ren nevertheless expressed confidence that Huawei would “become stronger” after the company had “walked this path”.

The new estimates imply that revenue, previously forecast to increase from $104.2bn in 2018 to $120bn in 2019, would now be broadly flat through 2020, representing a significant downgrade to the company’s growth prospects.

However, analysts cautioned against any sort of forecast without knowing how the US export ban — currently lifted under a three-month partial suspension — will play out.

“If you assume it will stay and be diligently implemented [by the US], I suspect revenues will be a lot lower,” said Edison Lee, analyst at Jefferies in Hong Kong. “If the US export ban continues, I think they cannot deliver anything next year.”

While analysts believe Huawei holds enough inventory to see it through 2019, it will lack crucial software and components, such as electronic design automation tools supplied by US vendors, that enable it to produce its own chipsets.

Mr Lee said that no parts of the company would be split off or sold, and “there will not be any large-scale cutting of operations at Huawei”.

Bloomberg reported on Sunday that Huawei was bracing for international smartphone sales to fall by between 40m and 60m units this year. A Huawei spokesperson said it was difficult to estimate smartphone sales for the full year because “the Chinese market is still growing, and we are still talking to Google about the Android OS — the situation is still dynamic”.

Huawei was thrown into turmoil after US President Donald Trump placed it on a prohibitive “entity list” in May. Washington has also moved to bar US carriers from using Huawei equipment for next-generation 5G networks on national security grounds, and has pressed allies to do the same.

Huawei has said the blacklisting would hit around 1,200 of its US suppliers, including companies that provide the majority of the backbone of the company’s cyber security system.

Mr Ren on Monday expressed surprise at the forcefulness of the US restrictions, saying: “We didn’t think that the US would attack Huawei with such great strategy and determination . . . not only attacking our suppliers; we also can’t take part in many international organisations, we can’t increase our co-operation with universities, we can’t use anything with US content”.

He insisted, however, that “these things can’t halt our onward march”.

Your website employs a mathematical algorithm based on the responses to a number of concerns, and according to that algorithm they inform you just what portion match, buddy, and enemy you might be with any offered individual.

Monthly Installment Loans vs. Payday Loans: That Will Be Better?

Your website employs a mathematical algorithm based on the responses to a number of concerns, and according to that algorithm they inform you just what portion match, buddy, and enemy you might be with any offered individual.