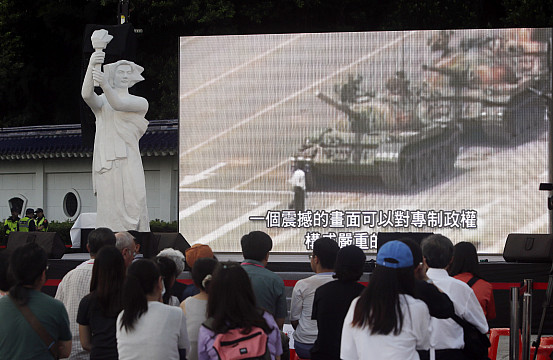 Thirty years on, Taiwan continues to commemorate the tragedy of  the 1989 Tiananmen protest. “It reminds Taiwan’s people of the history and the preciousness of democracy,” said Taiwan’s Vice President Chen Chien-jen at the vigil on Tuesday.

Alongside Hong Kong and Macau, Taipei was the only other city in the Chinese-speaking sphere hosting the annual vigil to mourn the Tiananmen massacre, as it has for the past three decades. This year, Taipei’s Liberty Square saw a large turnout of around 2,000 people, according to the organizer, New School for Democracy.

Vice President Chen’s presence showed the emphasis the country’s current administration placed on the event. President Tsai Ing-Wen also took to social media channels to support the Chinese people in the quest for democracy: “Freedom-loving friends in Hong Kong and China, rest assured that despite threats and subversion, Taiwan will unconditionally defend democracy and safeguard freedom.”

It’s hard to imagine that 30 years ago, when Taiwanese people stood in solidarity with Chinese students across the Strait during the period of Tiananmen Square protests, each side faced an authoritarian government. Thirty years later, China is witnessing unprecedented oppression, while Taiwan shines as a beacon of democracy in Asia.

The diverging historical trajectories between Taiwan and China, therefore, underlie the continuing commemoration each year in Taiwan. The annual Tiananmen vigil reminds Taiwanese people of their own oppressed past and the resistance against China’s ongoing oppression. That spirit could be best epitomized by this year’s vigil theme – Remembrance, Resistance.

“To Taiwanese people, the significance of commemorating the June 4 Movement lies in cautioning ourselves of the hard-earned democracy and looking to the future on how to safeguard Taiwan’s democratic values,” said Yu-Chun Tseng, a volunteer for Covenants Watch, an NGO which was a co-organizer of the evening.

Chance Xu, a National Taiwan University student, came to the vigil as he saw the inextricable relationships between the Tiananmen protests and Taiwan’s history. “I personally think Taiwanese people are obligated, through the commemoration of Tiananmen, to express our disaccord with the core values of the Chinese Communist regime, and to demonstrate to the international community the wide gap of political systems across the Taiwan Strait,” he said.

The course of history in the 1980s marked a decisive divergence of Taiwan and China’s political ideals.

Following the Tiananmen massacre, Taiwan saw its own mass protest in 1990 – the Wild Lily student movement – calling for direct elections of the president among other demands. But the government in Taipei did not turn the peaceful protests into a bloodbath. And six years later, Taiwan’s democracy took a great leap and elected its president for the first time.

Though both saw large-scale student protests, China violently cracked down on its people, while Taiwan sided with its people and became the vibrant democracy the world knows today. The recent legalization of same-sex marriage serves as another prominent example of Taiwan’s liberal values in action.

The fundamental differences between the two countries are even more conspicuous in the context of Uyghur crackdown in Xinjiang and the extradition bill in Hong Kong, which has the potential to send activists to China for trial at Beijing’s request.

At the same time, the Chinese Communist Party has tried to erase the events of June 4, 1989 from collective memory. Chinese people are barred from accessing related information online.

As Taiwan becomes increasingly embroiled in a volatile relationship with China, some people have begun to question whether Taiwan should continue the commemoration vigil. Hardliners claim the Tiananmen tragedy belongs to the realm of “foreign affairs” – nothing to do with Taiwan.

Miao disagreed and said it was necessary for Taiwanese, especially the young generation, to learn of the lesson of the Tiananmen massacre – and every other historical incident involving totalitarian governments’ violent clampdown on people. “As [China’s] crackdown continues against Taiwan, Hong Kong, Xinjiang, and Tibet, we must alert people to heed on the ongoing brutal suppression in remembrance of June 4.”

Aware of atrocities elsewhere, Tseng said she felt “fortunate to be living in a free and democratic Taiwan with a constitution protecting human rights,” where she could share her opinions freely and search for uncensored information online.

In 1989, Wu Renhua, then a university researcher, witnessed the cruel crackdown. After 30 years, he stood on the other side of the Strait, on the soil of a free democracy, to tell the crowd in Taipei that, in China, “June 4 is not history but a reality. The crackdown continues.”

John Liu is a freelance journalist based in Taipei.

Title Loans Dodge City, Kansas whenever you are now living in Dodge City and require some cash, you have got an options that are few.