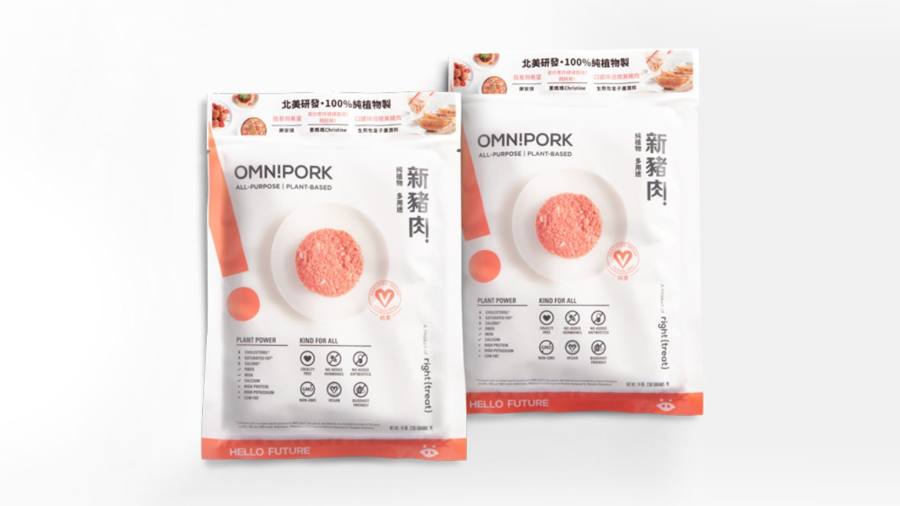 With China poised to cull a third of its pig herd due to African swine fever, a Hong Kong-based entrepreneur is hoping to step into the gap with a plant-based pork product he hopes will replicate the success of Beyond Meat and Impossible Foods.

David Yeung, founder of Hong Kong-based Right Treat, said he developed Omnipork from peas, soy and mushroom proteins to provide Asian chefs with a more environmentally friendly alternative to pork and now plans to launch it in China.

“When Asian consumers go to the wet market or supermarket to buy meat, they turn it into their own dish — it is not a finished product,” Mr Yeung said, unlike some western ready-to-eat meat alternatives such as burgers or sausages. “For chefs, pork is almost like a foundation ingredient in whatever they cook.”

He said Omnipork was designed to replace pork wherever it appeared in Asian cuisine, such as its role in dumplings where it acts as a binding ingredient to which chefs add mushrooms or other vegetables.

First launched in restaurants in Hong Kong in April 2018, Omnipork is now sold in Singapore, Taiwan and Thailand.

May Chow, chef-owner of Little Bao and Happy Paradise Hong Kong, has been using Impossible Foods products in her restaurants for a year and said her customers were opting to eat less meat. In terms of meat alternatives in Asia, Ms Chow said familiarity was a crucial factor, meaning a replacement for pork would appeal more to a Chinese housewife.

Omnipork’s China launch — planned for the latter half of this year — comes as China’s pig farms have been hit by African Swine fever. The country is expected to lose 130m animals to the disease, which is fatal to pigs and has no cure. The disease has already pushed up retail pork prices in China and Nomura forecasts prices will rise by a further 40 per cent in the next six months.

“I’m not a genius, I don’t have a crystal ball, but I would never expect that the year we launched Omnipork would be the year that the African swine fever outbreak would happen,” Mr Yeung said. “But I did know this breaking point [for agriculture] would happen.”

Consumers globally are warming to plant-based meat substitutes as they look for more sustainable sources of protein. Los Angeles-based Beyond Meat shares more than doubled on their debut at the beginning of May and Impossible Foods raised a further $300m in its latest funding round, taking its valuation to $2bn. Impossible said it will plough the new funds into production to keep pace with demand.

And that trend is not limited to North America and Europe. The ranks of Asia-Pacific’s vegetarians rose to 496m in 2018, up from 488.5m in 2014, according to figures from market research provider Euromonitor International. India makes up the bulk of that population with 397m vegetarians while China is home to 56.7m.

Euromonitor forecasts the Asia-Pacific will account for three-quarters of the global market for meat substitutes in 2023 at $17.4bn — up from $15.2bn in 2018.

Omnipork’s home market in Hong Kong has one of the highest levels of meat consumption per person where the average resident eats 664g of meat a day, and daily consumption of pork and beef is four times that of the UK, the University of Hong Kong found.