Australia’s economy has recovered rapidly from its deepest contraction in almost a century, growing by a better than expected 3.1 per cent in the December quarter despite a widening dispute with China, its largest trading partner.

Authorities’ adept handling of the Covid-19 pandemic helped drive a 4.3 per cent surge in household spending compared with the previous quarter, as the state of Victoria eased one of the world’s strictest lockdowns. China’s seemingly insatiable demand for iron ore led to a rise in commodity prices, which boosted national income.

Vehicle purchases surged by a record 31.8 per cent, which reflected higher household disposable income and shifting spending patterns with consumers unable to travel overseas because of border closures.

The damage wrought by Covid-19 lockdowns and the nation’s first recession in almost three decades last year was still evident, however, with economic activity falling 1.1 per cent in the 12 months to the end of 2020.

But economists said the unexpectedly robust growth — consensus estimates were for a 2.5 per cent increase in quarterly gross domestic product — suggested economic output would return to pre-virus levels by the middle of the year.

Josh Frydenberg, the country’s treasurer, said Australia’s performance on the health and economic fronts was “world leading”, noting it was the first time in history that the economy had experienced two successive quarters of growth above 3 per cent. 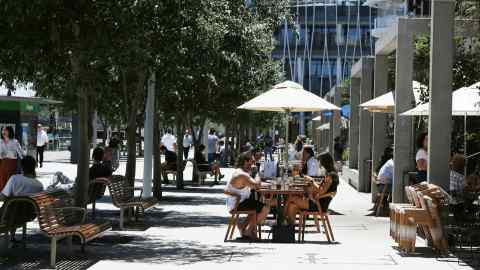 The economy grew 3.4 per cent in the September quarter.

“There are still sectors and regions that are doing it tough, but our economic support will continue and today’s national accounts confirmed that a strong, broad-based recovery is under way,” said Frydenberg.

Australia’s recovery has been stoked by a sharp rise in commodity prices, particularly iron ore, with the terms of trade — a measure of export prices relative to import prices — rising 4.7 per cent in the quarter.

Trade tensions with China, sparked by Canberra’s call last year for an inquiry into the origins of the Covid-19 outbreak in Wuhan, have failed to damp exports, with Beijing unable to find alternative sources for the steelmaking ingredient.

“But that hasn’t happened this time. Partly thanks to the strength of iron ore prices, Australia’s domestic income is already 0.5 per cent above pre-pandemic levels.”

Marcel Thieliant, economist at Capital Economics, said GDP should surpass pre-virus levels by the middle of 2021 as vaccines were rolled out.

“We reiterate our above consensus forecast for GDP growth of 4.5 per cent this year . . . which implies that allowing for the slump in net migration due to the closure of the border, the economy will suffer no permanent drop in output as a result of the pandemic,” he said.

How is coronavirus taking its toll on markets, business, and our everyday lives and workplaces? Stay briefed with our coronavirus newsletter.