Joe Biden is considering appointing a White House Asia tsar, signalling the rising importance of the region as the US president-elect prepares to tackle a wide range of challenges from China.

Five people familiar with the debate inside the Biden transition team said he was weighing the option to create the role in the National Security Council. Establishing the position would underscore how the region has become even more critical since the Obama administration’s “Asia pivot”.

“The president-elect has repeatedly made clear the Asia-Pacific region is one of tremendous opportunity, but also one where our interests and values face increasing challenges,” said one Biden transition team official.

The official added that the new administration would install that “right people and structures” to promote US interests and values alongside allies.

The tsar role is one of several ideas being considered by Jake Sullivan, the incoming national security adviser. Any move would reflect how US-China relations have become more complicated and tense during the presidency of Donald Trump and since Mr Biden left his position as vice-president four years ago. It would also highlight the challenges Washington and its allies face dealing with an increasing assertive China.

Mr Biden will face a range of sensitive issues, ranging from Chinese human rights abuses in the Xinjiang region to Beijing’s efforts to clamp down on the pro-democracy movement in Hong Kong. Those challenges come against the backdrop of a growing bipartisan consensus on Capitol Hill that the president-elect must take a tougher stance on China.

Elevating the importance of Asia will be a very positive signal to the region, and not necessarily bad for Europe given how important China has become in the transatlantic dialogue

Mr Biden will also face a host of trade and economic issues, and must decide how aggressively to take on Chinese companies that pose national security concerns.

Before the US election, the Biden campaign solicited ideas from a range of Asia experts that included a proposal to create a China tsar whose role would span the US government. But several people familiar with the idea said it had failed to gain traction. Some advisers argued that it would help China by giving Beijing a high-profile person to focus its pressure on.

A person familiar with the discussions over the new role stressed that a decision had not been taken. “There have been a number of structural proposals floated, but the team has not made any decisions,” the person said.

One possible permutation would involve naming three senior NSC directors to manage three geographic portfolios under a tsar. One would oversee China, the second would manage India and the third would focus on Japan, South Korea, Australia and other US allies in the Asia-Pacific.

“Elevating the importance of Asia will be a very positive signal to the region, and not necessarily bad for Europe given how important China has become in the transatlantic dialogue,” said one Asia expert. “But the real credibility test for allies like Japan will be whether the premise is working with Asia to deal with China, or just elevating China within the White House. My guess would be it’s the former.”

Jeff Prescott, a Biden transition official who is expected to be named to a top Asia job and is a contender for proposed tsar position, told the Financial Times in October that Mr Biden would rebuild US alliances, partly in an effort to work with other countries to deal with China.

Some experts argue that appointing a tsar would send a positive signal to traditional US partners that have been frustrated as Mr Trump undermined the country’s alliances. Mr Biden has named John Kerry, a former secretary of state, as his climate tsar, in an effort to send a message about his commitment to tackling climate. 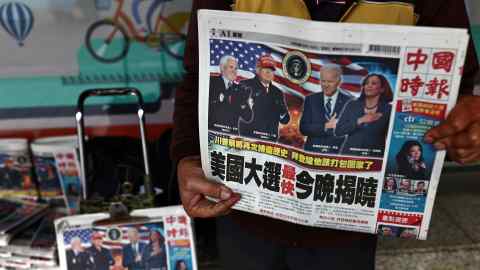 But others cautioned there was a danger it would create more bureaucracy and result in more egos competing for a seat at the decision table.

A former national security official said it could create “one more stop on the inter-agency bus route” that would slow decisions. Another former official said choosing someone with stature could accelerate decision making, but also warned about the potential to add more red tape.