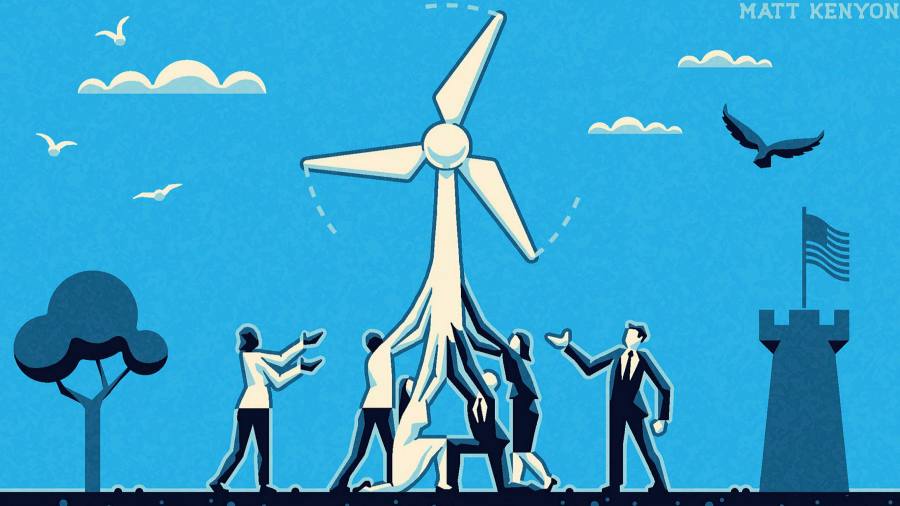 Defence hawks and liberal progressives do not typically make easy political bedfellows. And yet there is an issue where their interests may align almost perfectly: climate change.

President Joe Biden has once again made this most pressing of global problems an American priority. Addressing it involves bolstering the resilience and security of energy infrastructure, improving skills training and education, investing in high-tech manufacturing, and moving business models away from “efficiency” and towards “resiliency”.

All of these things appeal to the type of leftwing voters who support Democratic representative Alexandria Ocasio-Cortez, populariser of the idea of a “Green New Deal”. But they also appeal to security-conscious conservatives worried about the rise of China. Both groups are interested in connecting the dots between sustainable energy, jobs, and economic and geopolitical security. What if there was common ground on how to do so?

That idea is being put forward by a group of Navy technologists and scholars who recently came up with a proposal for a national resilience strategy that builds on the overlapping interests of these two camps. It evokes some of the bipartisan co-operation that happened during the great-power competition of a half-century ago.

In the run-up to the second world war, public and private sector actors worked together on economic strategy geared towards preparing for battle. Bill Knudsen, chairman of General Motors, was tapped by Franklin Roosevelt to lead the retooling of civilian industry for wartime production. The production lines that were created not only helped win the war but also increased productivity and bolstered growth and competitiveness in the postwar period.

In the wake of a new geopolitical challenge from China, pandemic-related supply chain shortages, and increasing fallout from climate change, Republicans and Democrats alike fear that decades of focus on economic efficiency rather than resiliency has left the US ill-prepared to cope with national disaster.

At the same time, clean energy presents the clearest path to a more sustainable economic model. History has shown that productivity and jobs tend to grow in tandem when government underwrites private sector involvement in a new, paradigm-shifting technology — like railroads, or the internet.

The transition to clean energy is the obvious opportunity today, and it is not only environmentalists who think so. Defence officials would love to see the US lead in areas such as lithium battery technology, which powers clean cars and unmanned military vehicles. That would require investments in the kinds of high-tech research and development and worker training programmes that progressives advocate for. It might also require protecting domestic supply chains in strategic areas such as computers and electric cars. Last week, Biden signed an executive order mandating a review of where the US obtains semiconductors, rare-earth minerals, large capacity batteries and some pharmaceuticals.

Such measures could create new middle-class jobs, something that both sides are interested in. Progressives have ideological reasons: they want to see the balance between capital and labour tip more towards the latter; defence hawks see national security and economic security as indivisible. “We look at diplomacy, the military, the economy and information as different elements of national power,” says Jeff Kline, a professor at the Naval Postgraduate School in Monterey, California. “You can’t separate them.”

While conservative, such a view reflects the kind of political realism espoused by military theorists such as Carl von Clausewitz rather than the laissez-faire economics of David Ricardo. It also tracks the enthusiasm for industrial policy and stakeholder capitalism increasingly espoused by parts of the pro-labour left and the security-conscious right.

Defence scholars have long been fans of economic resiliency. But the 2008 financial crisis, the Covid pandemic and a number of smaller crises have convinced people across the political spectrum that the public and private sector need to work more closely together. The goals include re-mooring wealth and prosperity in local communities and solving the most complex — and potentially rewarding — problems of the day.

Imagine a national dialogue in which business leaders, security experts, educators, labour advocates and others came together to find ways to transition to clean energy, while also bolstering jobs, security and relationships with allies. They would want to explore how the public sector could best send signals to private investors to enable funding to flow to the right places. The discussion should encompass how best to connect the needs of job creators and educators of a 21st-century workforce.

The challenge would be national. But given the size and diversity of the US, solutions should be local, coming from the ground up and by necessity involving individuals from all over the political spectrum. “The overlap between social priorities and defence priorities is actually quite compelling,” says Garth Jensen, director of innovation at the Naval Surface Warfare Center in Maryland. After years of division, perhaps America can find some productive common ground.