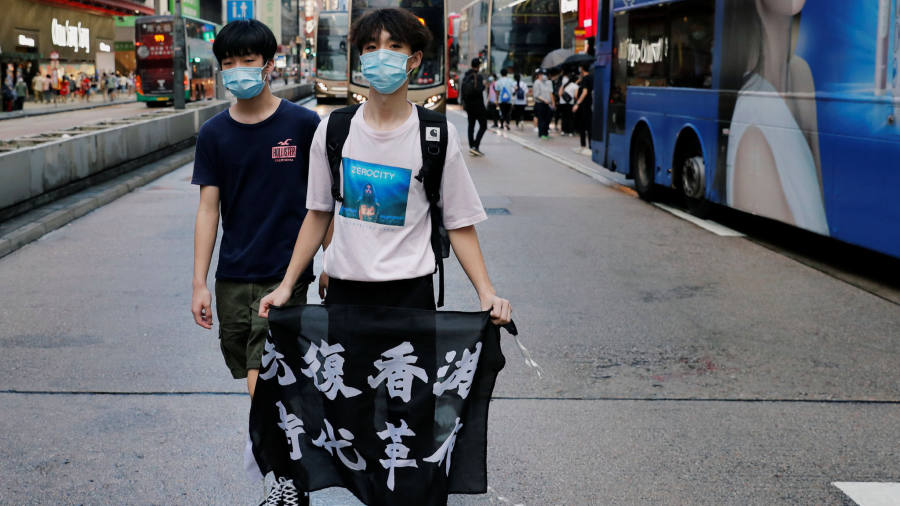 I was sipping coffee in one of Hong Kong’s high-end malls when a crowd of riot police suddenly swarmed the thoroughfares of polished granite, shattering the sterile hum of faint muzak. Storming past the Bulgari, Dior and Chanel stores, they fanned out looking for pro-democracy protesters who had been planning a demonstration in violation of coronavirus restrictions on gatherings.

The episode ended as quickly as it began. The officers were too efficient. Having arrived before the protesters, they found no one to arrest and drifted back to their vehicles, slightly sheepish at the commotion they had caused. As I returned to my coffee, I reflected on how Hong Kong has become a strange kind of police state.

When it comes to executing the will of Beijing, such as crushing anti-government protests, Hong Kong’s chief executive Carrie Lam could hardly be more determined.

After last year’s mass protests against an extradition law turned violent and threatened to become a wider pro-democracy uprising, the police made more than 8,000 arrests.

This year, they are refusing to allow new demonstrations. Because gatherings of over eight people are banned, except for religious ceremonies, the city’s usual June 4 candlelit vigil to mark the Tiananmen Massacre is in doubt.

But elsewhere, as in its response to Covid-19, Ms Lam’s government has vacillated and given into public pressure in ways that would embarrass most self-respecting police states.

Take its initial reaction to China’s coronavirus outbreak in January. For a city that suffered the Sars outbreak in 2003, Hong Kong was curiously reluctant to close its border with China. Ms Lam only relented after a newly formed union of healthcare workers went on strike.

Meanwhile, as the government equivocated, Hong Kongers staged one of the world’s first runs on toilet paper. These became so valuable that thieves staged the pandemic’s only loo roll heist, from a local supermarket.

Then, as returnees from abroad started a second wave of infections, Ms Lam, a devout Catholic, decided alcohol was to blame and tried to ban it from restaurants. “Sometimes people get a bit intimate when they’re drunk, and this will raise the risk of cross infection,” she said.

Her government did shut bars and nightclubs, but relented on banning alcohol from restaurants after pressure from the industry.

In another about-face, the pandemic struck as the government was trying to ban the wearing of face masks to prevent pro-democracy activists using them to avoid detection. Ms Lam at first ordered senior officials not to use them, ostensibly to save supplies for medical professionals. Then the government backed down. Now it is distributing free masks to everybody.

To be sure, Hong Kong has fared far better than many other places during the outbreak, including its rival Asian financial centre, Singapore. So far, there have only been four deaths and 1,056 infections in a population of 7m. It has also avoided the draconian lockdowns of mainland China or the UK.

The government has played some part in this. It did eventually shut the borders and introduce quarantines for travellers. Yet many put Hong Kong’s success down to the pragmatism of its people. Distrustful of the government, they began wearing masks from the outset, with voluntary social distancing and working from home.

The protest movement has also helped, according to Zeynep Tufekci, an associate professor at the University of North Carolina, writing in The Atlantic. This was through initiatives such as the newly formed medical workers union and a website informing users of safe shops to buy protective gear.

With minimal new community infections, pressure is now growing on the government to remove its limit on gatherings. Critics accuse it of using restrictions to suppress new protests.

Ms Lam has tried to shift public discussion to lighter subjects. On Mother’s Day, she took to Facebook to show off a handbag that her sons had couriered to her. But the attempt at levity backfired. In a demonstration of her government’s siege mentality, she admitted the parcel had caused a panic when it arrived. Her security thought it might be a bomb.