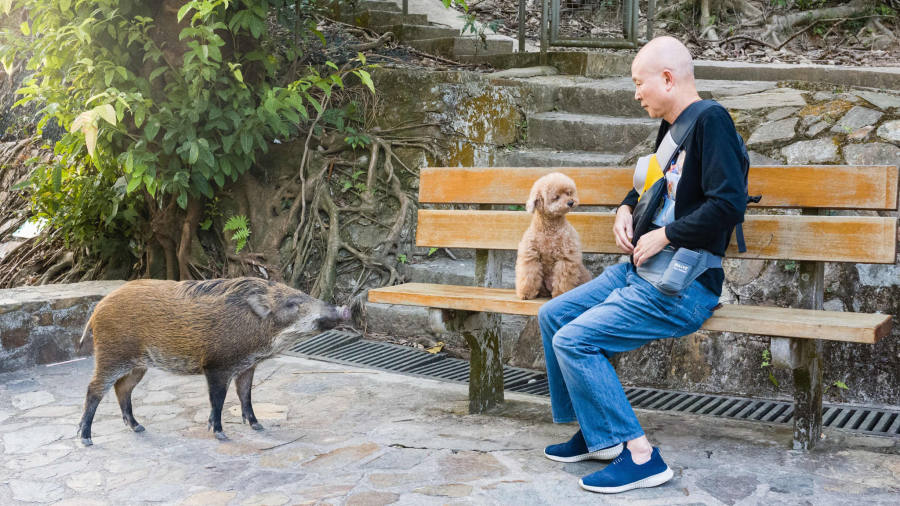 When I meet Jeremy Young, district councillor for Hong Kong island’s mountainous Peak constituency, he raises one of the core issues of his campaign during local elections late last month: wild boars.

While the city’s anti-government candidates campaigned on existential issues facing the financial centre, such as Beijing’s encroachment on local civic freedoms, the clean-cut Mr Young focused instead on porcine encroachment into middle and upper-class neighbourhoods. “I can tell you exactly what time this family of piglets will come from Bowen Road, down to MacDonnell Road, to Kennedy Road, then go into the park — and they do this daily round,” the councillor from the pro-establishment Liberal party said last week.

I happen to know this particular pig family, too; I saw them trotting past my apartment block one night, overturning rubbish bins and gleefully nosing through the contents.

Mr Young’s targeting of the wild pig problem — he says they strayed from surrounding country parks after the government stopped culling them a few years ago — might sound trivial. But it served him well in the elections, in which pro-democracy candidates swept all but one of Hong Kong’s 18 district councils, in what was seen as a referendum on the city’s nearly six months of anti-government protests.

The son of a Cathay Pacific Airways manager, he became the only pro-establishment politician to keep his seat in the Central and Western District Council, which covers downtown Hong Kong and its surrounds.

District councillors have little power beyond advising the Hong Kong government on their local area. But the district council elections are seen as more representative than those for the city’s de facto parliament, the Legislative Council, which is stacked in favour of business, or for the city’s leader, decided by a committee of mainly Beijing loyalists.

Last month’s election has brought in a new crop of young pro-democracy activists, who want to use their councils as a platform to push their “five demands”, which include universal suffrage, much to the horror of China’s president Xi Jinping. Some have come up with zany ideas to celebrate the triumph of democracy, such as one who suggested converting a musical fountain to play the Hong Kong protesters’ anthem-like theme song: “Glory to Hong Kong.”

Many, however, seem shocked just to have won. Jordan Pang, a taciturn 21-year-old student leader, delivered a surprise defeat to a senior pro-Beijing politician to win his constituency. Like many of the new intake, he wants to employ protesters arrested in the demonstrations who cannot get jobs: “It’s all about the ideology of this authoritarian system against the free world,” Mr Pang says.

The challenge for many new district councillors will now be to start focusing on local issues, such as the pigs.

In working-class Lam Tin, the successful pro-democracy candidate Eason Chan, a university student, wants to reduce public hospital waiting times. When I meet him in the shadow of high-rise public housing towers, voters tell him: “Take care, add oil” — the Cantonese phrase for “keep it up”. The hope was that eventually a Mikhail Gorbachev-like figure would appear in China who would allow universal suffrage in Hong Kong, Mr Chan says. “We don’t want to fight on the street. Why do we come out? Because the institution is not workable.”

Back in the Peak constituency, Mr Young says he is pro-democracy but balks at his colleagues’ passion for the immediate introduction of universal suffrage, which he thinks could be ill-fated. As for the pigs, he says a short-term solution is a new bin that cannot be overturned and for people to stop feeding them. But in the longer run, their riotous forays through the streets may mean the resumption of culling.