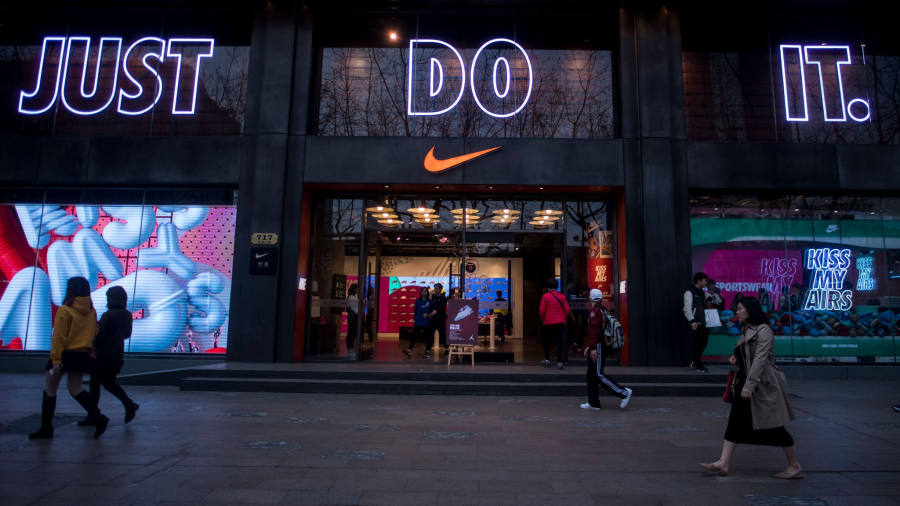 Nike’s chief executive has said the sportswear company will be committed to China “for decades to come” after it faced a backlash on the mainland over support from one of its shoe designers for protests in Hong Kong.

Mark Parker made the comments as Nike’s quarterly earnings on Thursday underlined the importance of Chinese demand to the US company as it deals with trade war uncertainty and slowing global growth. Quarterly revenues from the region jumped 16 per cent to $1.17bn — four times faster than the group as a whole.

The Financial Times revealed this week that Nike, based in Oregon, cancelled sales in China of a line of limited-edition trainers designed by Undercover, the studio of Japanese designer Jun Takahashi. Mr Takahashi had posted a picture of protesters with the slogan “no extradition to China”, a reference to Hong Kong’s proposed extradition bill, on its Instagram account.

Describing the China business as a “blueprint” for other parts of the business, Mr Parker told Wall Street analysts: “We are and remain a brand of China and for China.”

He added: “We’re confident that we’ll continue to grow sport and our business in China for decades to come.”

Nike’s earnings were also helped by direct sales to consumers, as it sold more items online at full price. Sales across the group came in at $10.18bn for the three months to the end of May, a 4 per cent rise from the year-ago period.

However, higher selling prices were not enough to fully offset the effect of rising marketing and supply chain investments, a higher corporate tax rate and a stronger dollar. Net income fell 13 per cent year-on-year during the quarter to $939m, or 62 cents a share.

Shares in Nike were 0.8 per cent lower in after-market trading, as analysts on average had expected earnings of 66 cents a share.

In the run-up to Thursday’s earnings, investors have been nervously trying to gauge how Nike would be affected by the ongoing trade dispute between the US and China.

Washington increased tariffs on $250bn worth of Chinese goods in May, and Donald Trump has threatened to place levies on another $300bn in US imports from China.

Nike and more than 170 other American shoe companies and retailers have warned the US president of “catastrophic” consequences if the new tariffs were to be implemented.

“We’re certainly mindful of the risks and more importantly we’re in command of the conditions that are under our control . . . delivering great product, engaging experiences, and building our brand. Our greater China business is the blueprint.”