Opposition lawmakers should call a spade a spade

It is regrettable that some quarters of Hong Kong society and the international community do not make the effort to understand what is going on in Hong Kong, and make allegations about the proposed fugitive law amendment that do not stand up to the facts.

Equally regrettable is the decision by the German government to offer political asylum to Ray Wong Toi-yeung and Alan Li Tung-sing, who were treated as if they were persecuted by the Chinese government and prosecuted for political reasons. In fact, they were charged for their role in a riot in Mong Kok during which bricks were thrown, and people were hurt. A police officer was even compelled by the exigencies of the day to fire two shots as a warning to the rioters. As a matter of fact, this riot which happened during the Chinese New Year in 2016 involved a clash between staff of the Food and Environmental Hygiene Department and sellers of fish balls on the street, which had nothing to do with politics. Both were arrested for their roles in the violence and both were released on bail. If they were “political prisoners” which means that they were arrested at the order of the government because of their political views, common sense tells us that the government would not allow them to be released on bail. Unless they were smuggled out of Hong Kong, the fact that they were able to leave Hong Kong suggests that their passports had not been withheld. The portrayal of them as political prisoners is simply incredible. A warrant to arrest them was issued only after they missed the schedule for turning up at the police station.

I even heard legislator James To Kun-sun making the claim on RTHK that someone in Hong Kong had been thrown into jail even though he had merely demonstrated peacefully. I do not believe there ever was such a case. What was that “political prisoner” charged with? Demonstrating peacefully according to the law has never been a crime in Hong Kong. How can a person who had acted peacefully within the law be convicted by a court of law and thrown into prison? To needs to explain this. 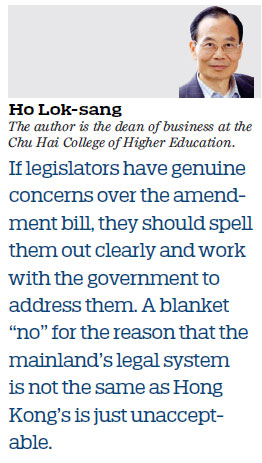 There was even a member of the RTHK audience who phoned in to join the discussion, and claimed that a top official of Sheng Kung Hui (the Anglican church in Hong Kong) by the name of “Koon Chung-ming” had supported the fugitive law amendment bill and in doing so betrayed the interests of Hong Kong. Yet this impassioned Hong Kong people obviously did not do his homework at all. Not only did he get the name of Reverend Koon Ho-ming wrong, he kept repeating the wrong name again and again even after the radio host corrected him multiple times, indicating that he just would not listen. He probably honestly believed that some disaster was likely to happen if the amendment bill was passed. But does he really know what is in the bill and will he find out?

Understandably, because presently legislators have to earn their seats through votes, politically it pays to appeal to people’s worst fears and emotions, and to get media exposure through the use of eye-catching language and behavior. It is a fact that if someone’s name does not show up in the press for an extended period of time, voters can even forget that he is a member of the Legislative Council.

However, they must remember that when they swore an oath as legislators, they vowed to serve the SAR. Integrity and truthfulness must be the bottom line and they must adhere to professionalism and ethics even when they try to attract attention and cheers among their constituents. In the absence of “political ethics”, what good is democracy, and many of those who intentionally distort facts call themselves “pro-democracy”.

Ray Wong Toi-yeung and Alan Li Tung-sing were charged not because of their political views or because of peaceful demonstration but because of violent acts and the incitement of people to commit violent acts. Let us call a spade a spade. Some foreign governments evidently have been misled by the narratives of Wong and Li when they sought political asylum. Legislators who have vowed allegiance to the SAR, therefore, have a responsibility to clarify matters to these governments, instead of riding on their mistaken decision to offer refugee status to Wong and Li, or badmouthing the SAR and the Chinese mainland.

If legislators have genuine concerns over the amendment bill, they should spell them out clearly and work with the government to address them. A blanket “no” for the reason that the mainland’s legal system is not the same as Hong Kong’s is just unacceptable. Still, the government has already indicated that conditions can be added to ensure that anyone extradited to the mainland will be assured of such things as an open hearing in court, no capital punishment, representation by lawyers, visits by family, etc. The fact is all cases are open to appeals all the way to the Court of Final Appeal.

In my opinion, calling a spade a spade is the first step to honoring their vows when our legislators took office.