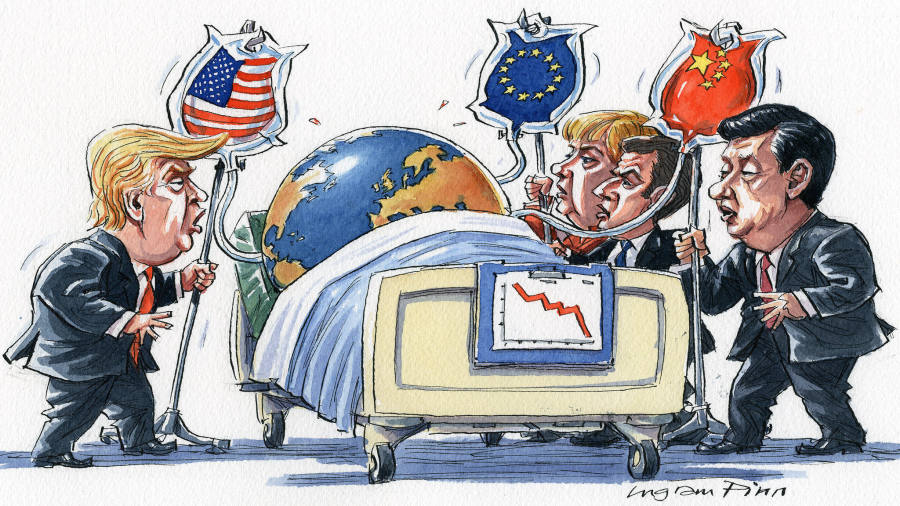 Once in a generation, maybe once in a century, political leaders must light a bonfire of contemporary preconceptions to confront a shared emergency. This is such a moment. History may ultimately define the 21st-century by the strong geopolitical rivalry between the US and China. For the immediate future the national interests of these two great powers are one. Those of European nations, too.

Washington and Beijing have been heading in the opposite direction. The blame game — tit-for-tat expulsions of journalists and US President Donald Trump’s description of Covid-19 as the “Chinese” virus — signposts a dangerous route to international breakdown. The vital work of epidemiologists and economic policymakers will be rendered useless if the leading powers choose to fight rather than co-operate.

The coronavirus pandemic began in China, has its epicentre in Europe, and is spreading rapidly across the US. It cannot be beaten in one of these regions unless it is defeated in all three. Containing it, and capping the human and economic costs, demands that the centres of global power work hand in hand. Prevailing economic orthodoxies have been rendered obsolete by the crisis. As with economics, so with politics. Closed borders and go-it-alone fiscal stimulus packages do not match the scale of the emergency.

International responses have been fragmented. A global threat has stirred the human instinct to turn inwards. Borders are shut. China sought to conceal the initial outbreak in Wuhan before, belatedly, moving to lock down the affected region. Mr Trump spent weeks in surreal denial, dismissing the virus as fake news or a Democratic party conspiracy before veering back towards the real world.

Europeans seem to have forgotten what it is to be, well, European. Germany’s Angela Merkel could once claim to be the guardian of something called European solidarity — the politician who understood that collective action in a crisis yields better results than unilateralism. Not this time. Germany has gone its own way.

The European Commission has been sidelined as 27 nations operate 27 action plans. Italy’s decision to implement a draconian lockdown to limit the spread of the virus was for the benefit of all. It failed to elicit offers from others to share the heavy economic costs. French President Emmanuel Macron has struggled to conceal his frustration.

The news has not been all bad. Central banks have closely co-ordinated interest rate cuts and quantitative easing to underpin the liquidity of financial markets. Scientists are ignoring borders and ideology in the frantic search for treatment and, eventually, a vaccine. Finance ministers from the G7 have agreed to consult weekly on where best to aim their fiscal bazookas. The “plumbing” of globalisation — the international agencies and bureaucracies that sit below most political sightlines — is largely intact.

A sustained, successful effort against the pandemic — and we are talking about a process lasting a year or more — will depend above all, however, on global leaders maintaining the trust of their citizens. Public confidence is a vital ingredient in every countermeasure. Borders cannot remain closed indefinitely. It is no use suppressing the outbreak in one region only to see it reimported from another.

The obvious framework for international co-operation is the G20 group of industrial and emerging nations — a gathering that reaches across North and South, East and West. The group played a leading role in the wake of the 2009 financial crash in persuading financial markets of the seriousness of political intent to stabilise the global economy. Prodded by India, the present G20 chair Saudi Arabia has called for a “virtual” summit of the bloc.

There will certainly be a role for the G20. But co-operation across so disparate a group will be possible only if the most powerful nations first establish a foundation. It is not too late to create such an inner steering group. As a starting point it would include Mr Trump, China’s President Xi Jinping and, from Europe, say, Ms Merkel and Mr Macron.

There are some things these four leaders can do immediately. Washington and Beijing could begin by calling a halt to the war of words. A second step would be to put to one side all their present trade disputes — suspending punitive tariffs and countermeasures. Mr Trump may need some persuading, but it should not be beyond the wit of his advisers to present such a move as a generous response to the assistance Beijing is now offering other governments.

For Mr Xi, the simple fact of the quartet would offer testimony to China’s leading role in global governance. For Ms Merkel and Mr Macron it would provide an opportunity to re-establish the EU’s coherence and relevance. And, yes, Mr Trump would also have something to gain. The rapid spread of the virus across the US has already debunked his claim that throwing up barricades is an inoculation against this disease.

Even such small moves may look impossible against the world’s present retreat into antagonistic nationalism. But there is still time. The fight against the pandemic is about to get harder. The world is facing an emergency. Self-interest demands collaboration. Whether in China, the US or Europe, political leaders cannot ignore this simple fact.