Partisan postures toward prosecution of rioters could undermine rule of law

On Aug 7, around 3,000 of Hong Kong’s legal practitioners staged a silent march to demand an inquiry into the riotous protests against the suspended extradition bill. They wanted the government to explain its decision to charge 44 protesters with rioting shortly after they were arrested, while charging suspected gangsters who attacked protesters and other innocent train passengers at Yuen Long station with the less severe unlawful assembly offense.

The lawyers accused the Justice Department of putting politics above legal principles in its considerations. They cited an open letter published by a group of anonymous self-proclaimed government prosecutors accusing Secretary for Justice Teresa Cheng Yeuk-wah of departing from standard practice and due process in charging the anti-extradition demonstrators with rioting.

In response, the Justice Department said its prosecutorial decisions are professional and fair, based on evidence gathered and devoid of political considerations as alleged. Cheng did not meet the protesting lawyers as requested. 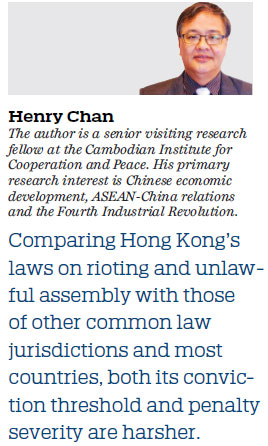 Comparing Hong Kong’s laws on rioting and unlawful assembly with those of other common law jurisdictions and most countries, both its conviction threshold and penalty severity are harsher. The previous British Hong Kong government had used the laws to control the riots in the late 1960s successfully.

The demonstration by the legal community was the sixth and largest silent protest of its kind staged since Hong Kong’s return to China in 1997. It has cast a shadow over the city’s much-vaunted reputation for the rule of law which helped to cement its position as an acknowledged international financial center. But are the allegations against the Hong Kong Justice Department justified? The author found probable justification for its decisions based on two elements of riot conviction often used in common law jurisdictions.

First is the element of the common purpose behind a riot.

Second is that the common purpose may be inferred from the conduct.

The anti-extradition demonstrators charged with rioting were caught on camera while engaging in violent acts and chanting “Liberate Hong Kong” and “Revolution of our time”. Their common purpose was demonstrated violently both in action and word. In contrast, the Yuen Long thugs had shown little common purpose.

The modern technology which provided the video evidence against the riotous demonstrators greatly expedited the Justice Department’s decision-making process, and the quick charges filed is not a sign of poor professionalism or due diligence as alleged. Under the common law system practised in Hong Kong today, legal professionals can file comments (amicus brief) on a case as a friend of the court (amicus curiae) with the permission of the judge. The charge of the Justice Department represents the legal position of the government in a particular case, and it is not a conviction. However, the demonstration by the legal professionals on Aug 7 created an impression of partisanship and might jeopardize the lawyers’ stand as a friend of the court. The unintended consequence will hurt the case of the arrested anti-extradition demonstrators rather than help them.

Under Article 63 of the Hong Kong Basic Law, the Department of Justice shall control criminal prosecutions, free from any interference. And, in keeping with judicial tradition worldwide, the department avoids commenting on cases to prevent the perception of sub judice influences on cases. Sub judice contempt is the common law offense of publishing material which tends to interfere with the administration of justice while court proceedings are ongoing. The court can then decide on the merit of any case according to the provisions in the law and not worry over extra-judicial pressure.

Hong Kong is entering the tenth week of anti-extradition demonstrations, and signs of increasing violence, such as nightly barricading of police stations, have plunged the city into the gravest crisis ever. Rebuilding trust n Hong Kong’s robust judiciary and its much-admired rule of law would be an arduous task ahead as both have come under severe stress since the 2014 “Occupy Central” and the ensuing court cases. As with most things which are valuable, they take years to build, but overnight to destroy. Hong Kong is at a watershed. The various conflicting stakeholders should keep Hong Kong’s long-term interest at heart and avoid adopting partisan postures for short-term gain. The demonstrating legal practitioners should remind themselves not to win the immediate battles only to lose the war. Were that to happen, we would all be losers!

Meanwhile, all those who care about Hong Kong’s long-term welfare should stand up now and be counted. Its future should not be decided by those who shout the loudest, behave most destructively and are most clever with their misinformation campaigns.

Singles Archives. Going Abroad as being a Single—It’s Better Versus You Believe

Singles Archives. Going Abroad as being a Single—It’s Better Versus You Believe