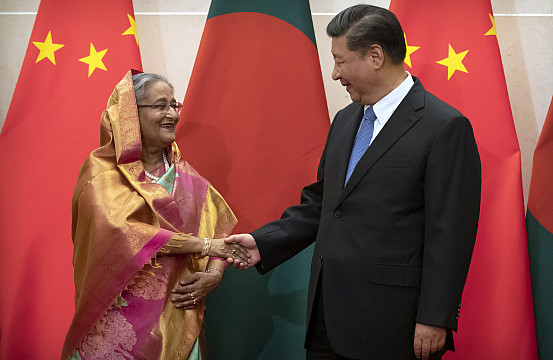 India has always watched China’s involvement in developing neighboring Bangladesh’s ports with suspicion. In April 2019, Indian news agency ANI published an article warning that Bangladesh’s Payra Seaport could fall into Chinese hands and become a part of China’s so-called “string of pearls.” Located in southern Bangladesh, Payra Seaport is a $15 billion Belt and Road Initiative project that will be constructed by China Harbor Engineering Company (CHEC) and China State Engineering and Construction Company (CSCEC), two Chinese state-owned enterprises that also oversee construction of Gwadar and Hambantota ports in Pakistan and Sri Lanka, respectively. Despite Indian fears of Chinese maritime encirclement in the Indian Ocean, Payra Seaport will likely never become a Chinese asset because of the unfeasibility of its location, poor supporting infrastructure, and the positive outlook of Bangladesh’s external debt.

The proposed location of Payra Seaport is naturally shallow in depth and requires a tremendous amount of dredging for cargo ships to be able to approach its berths. Jan De Nul Group, headquartered in Luxembourg, secured the contract for capital and maintenance dredging for the port for 10 years. In order to make Payra Seaport approachable by water, Jan De Nul must dredge a 75-kilometer path through the Rabnabad Channel to the Bay of Bengal. Initial dredging will cost $963 million. This would involve the removal of over 100 million cubic metric tons of sediment over the course of several years. Additionally, natural tidal currents will constantly bring sediment back into the channel, which will require nonstop dredging to ensure that the channel maintains an adequate depth to accommodate ships. Even a single cyclone, an occurrence that regularly ravages Bangladesh’s coastline, could completely fill the channel and trap ships. The richest countries in the world wouldn’t be able to afford the constant dredging required to keep the Rabnabad Channel open for passage, and Bangladeshi scholars have compared the venture to “literally throwing money into water.”

This challenge posed by nature not only affects the feasibility of Payra Seaport, but also threatens the adjacent $1.6 billion Payra 1320 MW Coal Fired Power Plant, which is supposed to generate electricity to power the port. Funded by China’s Export-Import Bank and constructed by a consortium of Chinese state-owned enterprises, Payra Power Plant requires coal that needs to be unloaded from ships that dock at Payra Seaport in order to generate electricity.

Like the adjacent seaport, Payra Coal Fired Power Plant has had its own issues. While the first 660 MW unit was expected to commence operations in April 2019, North-West Power Generation Company Ltd. (NWPGCL), a part-owner of the project, reports that construction of the plant is only 81 percent complete, while only 57 percent has been financed. Additionally, transmission line projects that feed power generated by the plant into Bangladesh’s electric grid have been repeatedly delayed, which NWPGCL blames on poor coordination. Aside from poor project management, there have been security concerns: riots by Bangladeshi workers at Payra Coal Fired Power Plant in June 2019 resulted in the bludgeoning death of a Chinese worker and suspension of construction on the plant for a week. Hence, aside from the same natural challenges faced by Payra Seaport, Payra Coal Fired Power Plant also faces other issues that put Payra Seaport’s future in jeopardy.

Bangladesh’s risks for external and overall debt distress have continually been low, with total external debt estimated to be 14.3 percent of GDP at the end of fiscal year 2017. Multilateral creditors like the World Bank and the Asian Development Bank hold a combined 60 percent of Bangladesh’s external debt, followed by Japan (9.2 percent) and China (2.9 percent). Also, Bangladesh has an average time period of 31 years to pay off its external debt, with an average grace period of eight years, according to the Bangladeshi government, which is confident that it will be able to pay off all loans, even if its annual GDP growth rate drops to 5 percent. Compared to Sri Lanka, whose Hambantota port has become the posterchild of so-called Chinese debt-trap diplomacy, Bangladesh is not at risk of China acquiring its critical infrastructure.

If Payra is unlikely to become a Chinese “pearl,” there is another possible explanation for China’s investment in these projects. China’s state-owned enterprises poured more cement between 2011 and 2013 than the United States did during the entire 20th century. The only alternative to massive layoffs and reduced output for these companies is to continue building, regardless of the feasibility of the projects. On the other hand, Bangladesh desperately needs infrastructure, specifically in the areas of ports and electrification, yet maintains a poor credit rating from every major credit rating agency. When China is the only willing financier of major infrastructure projects, Bangladesh has little choice but to take them up on their offer. From China’s perspective, these projects provide outlets for its bloated state-owned enterprises and even nurture dependence from the host country. Ultimately, the host country’s dependence on China for the future of its infrastructure benefits Beijing much more than pearls can.

To be sure, developing Asia has a serious need for new and modern infrastructure. The Asian Development Bank estimates that the continent will need to invest $1.7 trillion per year until 2030 to maintain its growth momentum, tackle poverty, and respond to climate change. Still, governments must be diligent about not picking “any” project that comes their way. Instead, they should ensure that they invest in the right projects that will generate long-term returns and face minimal obstacles. We should assess Payra Seaport through this lens.

Connor Fairman is a researcher based out of Washington D.C. focused primarily on China’s Belt and Road Initiative and Digital Silk Road.