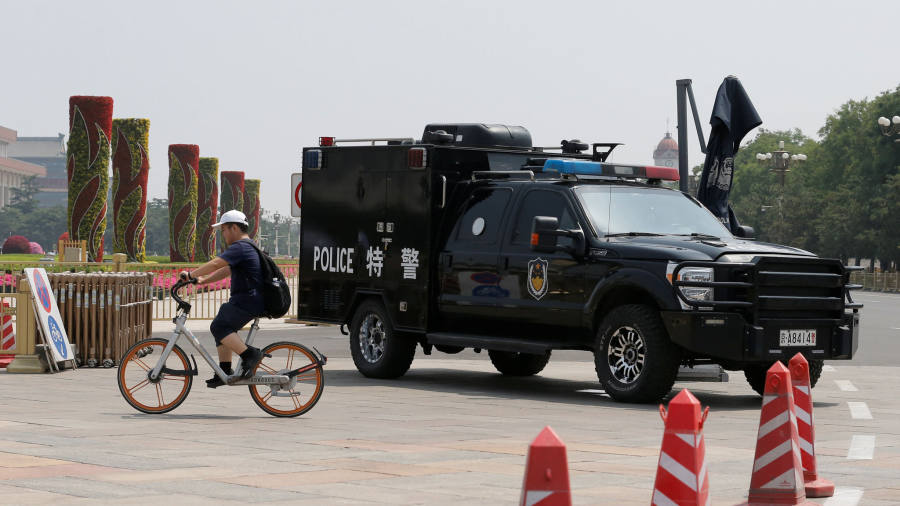 Refinitiv has pulled Reuters stories relating to the 30th anniversary of the Tiananmen Square crackdown from its Eikon terminals, as China’s moves to stifle mention of the events of 1989 appear to spread to businesses beyond its borders.

The Blackstone-backed data provider said that under the terms of its Chinese licence, customers in the country would be unable to access stories related to the pro-democracy protests crushed by China’s military on June 4 1989. The company, by far the largest customer of Reuters News, said international customers could still access the reports.

Refinitiv was formed in 2018 after private equity group Blackstone, the Canada Pension Plan Investment Board and Singaporean sovereign wealth fund GIC acquired a 55 per cent stake in Thomson Reuters’ financial and risk division in a $17.3bn deal. It agreed to pay Reuters a minimum of $325m a year for 30 years to carry the agency’s news reports. The company’s Eikon data analytics platform is used by traders and news organisations, and competes with the Bloomberg terminal.

Blackstone and its chief executive Stephen Schwarzman have longstanding commercial interests in China. The Financial Times has reported that the company has conducted at least 12 asset sales to Chinese companies in deals valued at a total of more than $32bn. Buyers included China Investment Corp, Beijing’s sovereign wealth fund, which was also an anchor investor in Blackstone’s 2007 initial public offering. CIC is no longer a shareholder.

China enforces strict censorship of news, including blocking access to foreign media websites such as The New York Times and Reuters, and censors any mention of the 1989 crackdown. Last week government officials warned foreign reporters not to film from Tiananmen Square on the anniversary, while defence minister Wei Fenghe said on Sunday that the authorities’ response had been “correct”.

Foreign media groups with operations in China have long faced pressure over their coverage of the country. Reuters’ own website has been blocked there since 2015, when it declined an instruction to retract a news report. Bloomberg, which is able to exclude stories from its China feed, has denied accusations by former staff that it stifled their China reporting early this decade to maintain its terminals business.

Michael Friedenberg, Reuters president, and Stephen Adler, editor-in-chief, said in a memo to staff seen by the FT that they had “spoken to Refinitiv and expressed our concern”.

“We continue to provide Refinitiv with the same scope of content that we always have, including stories relating to China, and Refinitiv’s decisions will not affect the breadth or quality of our coverage,” the company said in a separate statement.

Refinitiv said it was operating in accordance with its licence in China. “As a global business, we comply with all our local regulatory obligations, including the requirements of our licence to operate in China,” the group said in a statement.

However, some bankers in Hong Kong said they were also unable to access the articles on Tuesday morning. Their feed was restored by the afternoon.

Some of the blocked stories relating to the anniversary were republished on Tuesday after Reuters reported on the outage.

Commemorating the Tiananmen Square crackdown is not permitted in Beijing, where the government has stifled discussion. Some Chinese quietly marked the occasion with nuanced posts on social media, although more explicit messages — such as images of candles that evoke annual commemorations of the massacre outside China — were deleted by censors.

Widespread media coverage of the anniversary outside China has added to tensions in the escalating trade war between Beijing and Washington. Mike Pompeo, US secretary of state, said this week that hopes China would evolve into a “more open, tolerant society” had been “dashed”.

China’s embassy in Washington dismissed the statement as born of “prejudice and arrogance”, insisting that “China’s human rights are in the best period ever”.

Journalists at Reuters expressed shock at the removal of content, with some taking to social media to apologise to readers.

“So, if you’re a Refinitiv user, experiencing your partial Eikon experience for the first time ever this week, I apologise as a Reuters reporter,” Cate Cadell, a China reporter with Reuters, said on Twitter. “We reported these thinking you could access them.”