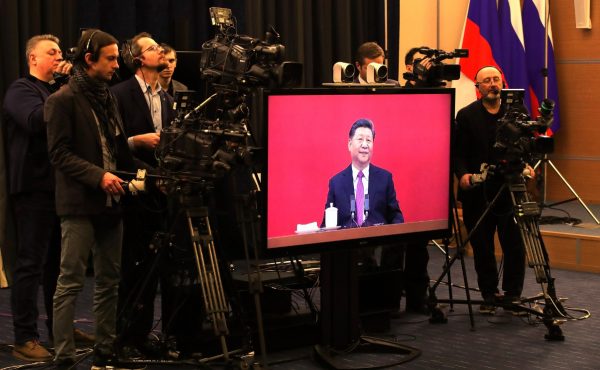 Earlier this week, Chinese President Xi Jinping and his Russian counterpart Vladimir Putin oversaw via video the opening of a 1,800 mile gas pipeline linking Russia’s eastern Siberia to China’s northeastern city of Heihe, with plans to eventually extend the line south to Shanghai. The project in Russia has been dubbed the “Power of Siberia.” The $400 billion, 30-year deal for Russia to pipe gas to China was first signed in 2014 between Russia’s Gazprom and China National Petroleum Corporation. The expansive project is being heralded as a flagship of Sino-Russian cooperation.

In 2020, China will import 5 billion cubic meters of gas from Russia, eventually reaching 38 billion cubic meters annually in 2024. In addition to hopes of extending the Power of Siberia pipeline, Chinese and Russian leaders have floated new energy agreements to develop natural gas in the Arctic and additional oil infrastructure.

As China’s economy has grown, so too has its demand for energy. Even as China’s GDP growth rate has started to temper, the country’s energy consumption increased by 18 percent from 2017 to 2018, according to the BP Statistical Review of World Energy in 2019. Given high levels of energy consumption and limited domestic energy resources, China is consistently seeking ways to ensure the safe import of energy supplies. In 2018, 70 percent of China’s oil was made up of foreign imports, while its gas supply consisted of 45 percent of foreign imports.

Acutely aware of China’s dependence on energy imports, the country has also sought to diversify its suppliers. The expansion of energy cooperation with Russia helps China do just that, reducing its reliance on sea transports that leave it vulnerable to piracy or a possible naval blockade in the event of major crisis. On a more local level, the Power of Siberia pipeline will also facilitate the conversion of China’s industrial northeast from coal-powered to gas-powered as China works to reduce its carbon emissions.

For Russia, its economy today is largely dependent on the export of raw materials, particularly energy resources. Petroleum, gas, and coal briquettes accounted for 55 percent of its total exports in 2017. While Moscow has long concentrated on its export markets to the west in Europe via Ukraine, it has also formulated its own “pivot to Asia,” often articulated as “looking east.” This eastern trajectory and bid to integrate itself more with East Asian partners, including China, has become increasingly pronounced since 2014 as Western sanctions against Russia have hurt it economically.

Cooperative projects like the Power of Siberia in the Russian Far East are lauded by Chinese and Russian leaders and analysts alike as a potential source of new growth across Asia. The Russian Far East is endowed with a wealth of natural resources — oil, natural gas, ores, copper, diamonds, gold, forests, and fish — and yet only 6 million people inhabit the region, compared to the more than 38 million who live in China’s Heilongjiang province to the south. Building up the Russian Far East has long been a strategic imperative for Moscow but it remains underdeveloped.

Energy is the most developed sector in China-Russia economic ties. In addition to the latest gas pipeline, Russia accounted for 11 percent of China’s oil imports in 2017. Since 2016, Russia has been China’s top crude supplier, after surpassing Saudi Arabia. The two countries established the Russian-China Energy Business Forum in 2018 with the intention of facilitating dialogue across the energy sector, boosting efficiency, expanding joint projects, and attracting investment. But Russia has not been China’s only energy alternative. In fact, under the auspices of the Belt and Road Initiative, China has been investing in infrastructure projects in Central Asia to tap into the region’s vast gas supplies. The China-Central Asia gas pipelines, linking China to Turkmenistan, Kazakhstan, and Uzbekistan, delivered an estimated 23 billion cubic meters of natural gas in just the first half of 2019, compared to the 36 billion cubic meters in 2017. In addition to receiving gas from Russia and Central Asian states, China also imports gas from Australia, Indonesia, Malaysia, and Qatar.

Despite growing Sino-Russian energy cooperation and two-way trade surpassing $100 billion last year, Russia is still best understood as but a piece in China’s broader economic policy. With regard to Russia, China’s main objectives can be understood as follows: (1) boosting economic interdependence with its neighbor to stabilize and pacify China’s periphery; and (2) further integrating Russia not only within the region, but also within an emerging multilateral regional institutional architecture, by and large led by China.

US stocks recover as WHO says no ‘global emergency’ yet

China and the US were never going to live happily ever after, so Donald Trump brokered the best divorce he could

Taiwan, Shut Out From WHO, Confronts Deadly Wuhan Coronavirus

US stocks recover as WHO says no ‘global emergency’ yet

China and the US were never going to live happily ever after, so Donald Trump brokered the best divorce he could

How do Singaporeans travel to Tibet？