Shares in China’s biggest chipmaker fell 7 per cent in Shanghai after Washington imposed export restrictions that could cut off Semiconductor Manufacturing International Corporation from crucial US equipment and software.

Washington’s move to curb critical supplies to SMIC further threatens the development of China’s domestic semiconductor industry, after the Trump administration had already cut Huawei off from its chip suppliers.

SMIC’s Shanghai-listed shares shed 7 per cent on Monday, while its stock dropped as much as 7.9 per cent in Hong Kong before ending the day down 3.9 per cent.

The US department of commerce told companies on Friday that exports to SMIC carried an “unacceptable risk” of being diverted to “military end use”, according to a copy of the letter seen by the Financial Times. Companies would now require licences to sell specific products to SMIC, it added.

The Shanghai-based company, one of China’s national champions, is an important part of Beijing’s push to forge a self-sufficient domestic chip industry. SMIC raised $7.6bn in Shanghai in July — the country’s biggest equity sale in 10 years — as investors bet that government support would help it thrive.

Mr Wang said the government would “continue to take necessary measures to protect the legitimate interests of Chinese companies”, according to state media.

Analysts say the US ban poses a grave threat to the chipmaker.

“SMIC will lose access to US equipment but also potentially equipment from other countries that want to keep the US on their good side,” said Stewart Randall, head of semiconductors at consultancy Intralink in Shanghai.

SMIC has signed orders worth more than $2bn with the US companies Applied Materials and Lam Research since 2019. The American businesses were SMIC’s top and third-largest equipment suppliers, respectively, between 2017 and 2019, according to its listing prospectus.

Its second-largest supplier was Dutch chip tool manufacturer ASML, from which SMIC purchased a cutting-edge EUV lithography machine in 2018. The $150m machine has not yet been shipped partly due to pressure from the US government. 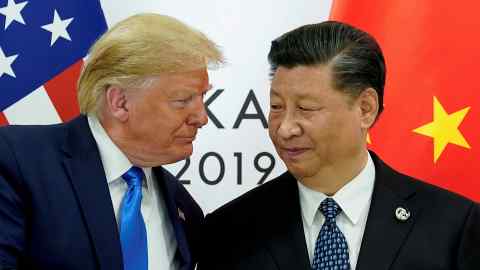 Analysts at Morningstar said it would be difficult for Chinese companies alone to supply SMIC with the equipment it needed to make chips.

“Although Chinese substitutes have emerged in parts of the supply chain, their specifications are typically two to three generations behind,” said Phelix Lee, an analyst at Morningstar.

“More Chinese companies in the supply chain are at risk of being banned” as the Sino-US tech war deepens, Mr Lee added.

SMIC said in a statement on Sunday that it had not received any formal notification of the order from the US commerce department.

In response to news of the sanctions, Global Times, a state-owned newspaper, called for a new “long march” for the tech industry to “rid itself of being dependent on the US”.