Support HK police in enforcing the law to stop violence

From storming the Legislative Council Complex and vandalizing the Liaison Office of the Central People’s Government in the Hong Kong SAR to besieging police headquarters and making explosive devices, the recent surge of violence has been hurting the feelings of everyone who loves and cares about Hong Kong. The most important thing Hong Kong society must do right now is firmly support the Hong Kong Police Force in rigorously enforcing the law to stop violence, restore social stability and uphold the rule of law.

For more than a month, the opposition camp and radical extremists in Hong Kong have deliberately caused a series of violent incidents that were way beyond the bounds of peaceful demonstrations. These acts completely deviated from their declared aspirations and twisted the original intent of the protest campaign beyond recognition. It is a well-known fact that the whole controversy started over the Fugitive Offenders and Mutual Legal Assistance in Criminal Matters Ordinance Legislation (Amendment) Bill 2019, the legislative process of which has ended after the SAR government suspended it. However, instead of calling off all the protests, radical extremists have stepped up violent acts, including vandalizing the front entrance and facade of the liaison office and defacing the national emblem; they also attacked police headquarters, assaulted police officers and desecrated the national flag. They went so far as to shout slogans of “Hong Kong independence” – which not only tramples on Hong Kong’s rule of law but also breaches the bottom line set by the “one country, two systems” principle. All signs indicate that the radical extremists were not interested in opposing the extradition law amendment bill to begin with. Their true purpose has always been to mess up and weaken Hong Kong as well as destroy “one country, two systems”. 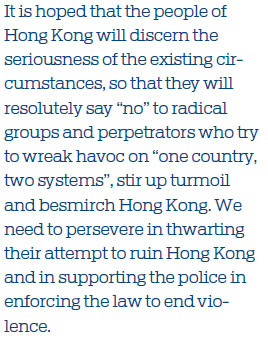 No civilized society under the rule of law will tolerate violence in any shape or form. We bear witness to the bravery and professionalism exhibited by Hong Kong police under tremendous pressure and duress as they serve and protect the city to the best of their abilities. In respect to Hong Kong’s tradition of peaceful assembly and demonstration, the police force has always issued letters of no objection and provided assistance when necessary. Yet radical extremists have repeatedly taken advantage of this policy and used peaceful assemblies and demonstrations as a cover to launch attacks on police officers maintaining public order on the scene with bricks, metal bars, etc, in blatant violation of the law. To most people’s horror, they also threw incendiary devices, poisonous/harmful fluids and powder at police officers. One of them even bit off part of a police officer’s finger while resisting arrest.

They are also instigating hatred against the police, carrying out “cyber vigilantism” to disclose private information of the officers’ family, as well as reviling their offspring. Despite suffering physical and psychological harassment, the police remain committed and courageous in discharging their duties. Their professionalism deserves the appreciation and respect of all the people of Hong Kong.

Violent attacks not only pose a threat to public safety, but also seriously impact on the rule of law, social order, the economy, people’s livelihoods and the international image of Hong Kong. The retail industry bears the brunt of the unrest, with sales volume drastically reduced in the past month. People are worried that if violence persists, the foundation of Hong Kong’s economy, namely the rule of law, business environment and social order will inevitably be undermined. Judging from the current state of affairs, we cannot leave it to the Hong Kong Police Force to fight a lone battle. In order to quench violence in an effective manner, the entire community in Hong Kong must come forward to take a clear-cut stand against violence.

It is hoped that the people of Hong Kong will discern the seriousness of the existing circumstances, so that they will resolutely say “no” to radical groups and perpetrators who try to wreak havoc on “one country, two systems”, stir up turmoil and besmirch Hong Kong. We need to persevere in thwarting their attempt to ruin Hong Kong and in supporting the police in enforcing the law to end violence.

As Hong Kong is part of China, the prosperity and stability of the HKSAR is not only related to the well-being of 7 million Hong Kong residents, but also associated with national sovereignty, security and the future of “one country, two systems”. The central government will remain steadfast in supporting the Hong Kong Police Force, relevant authorities and the judiciary to end violence and bring the offenders to justice.

This is a translation of an article published in People’s Daily on Monday.

US government contractors told to prove they have no Huawei ties