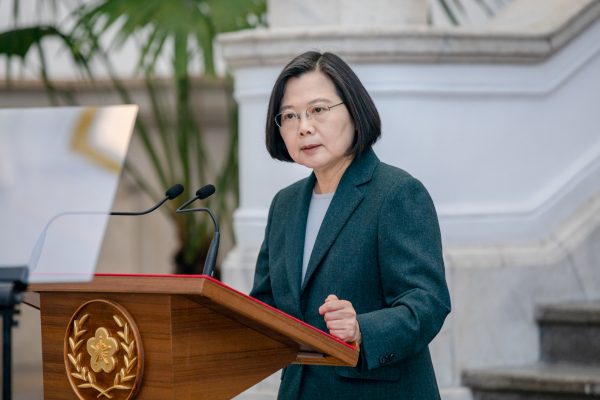 Taiwan closed its borders to foreign tourists on Thursday at midnight and ordered that citizens and foreign residents undergo a mandatory 14-day quarantine as the country saw its coronavirus cases double to 108 in the span of one week.

The move was announced Wednesday afternoon amid growing public concern that outbreaks in other countries, including in the United States and Europe, could spread into Taiwan, where local transmission of the virus had been largely halted.

President Tsai Ing-wen said on Thursday the next 14 days would be “a critical second stage in the epidemic response effort” and urged people to cooperate with epidemic prevention guidelines, not blame others, and refrain from panic.

After weeks of relative calm, Wednesday saw reports of panic buying at supermarkets after Taiwan announced its border controls. The government confirmed 23 new cases of the coronavirus that day, two of which were transmitted locally.

Chen Shi-chung, the health minister, reiterated Thursday that Taiwan is committed to preventing community transmission of the virus.

Taiwan has been globally lauded for its virus prevention efforts, which kicked into gear on December 31 when the country began screening arriving passengers from Wuhan as soon as it received reports of the then-unknown virus in the city.

But as the virus has spread rapidly across the globe – there are currently over 230,000 cases worldwide – people in Taiwan have been reminded the country’s fight against the virus is far from over.

Taiwan’s decision to close the borders was highly popular among the public and received support from numerous foreign missions in Taipei.

Under the new measures, entry into Taiwan is prohibited unless you are a Taiwanese citizen, a foreigner holding an alien residence certificate, a diplomat, or a specially approved business visitor.

Those who are allowed to enter Taiwan will be mandated to undergo a 14-day quarantine, regardless of where they traveled from.

The border closure stranded travelers heading to Taiwan, some of whom boarded planes without knowing of the new measures and were made to leave the country.

Migrant workers from Southeast Asia, whose entry and residence requirements are processed differently than those of other foreigners, will be allowed to extend their visas past their expiration dates. If they leave Taiwan, however, they will not be allowed back into the country.

As of Thursday, foreigners in Taiwan on temporary visas or visa-free arrival permits will not be allowed to extend their visas and stay in Taiwan. Under usual circumstances, many nationalities are granted 90-day visa-free entry in Taiwan; those who stay longer make “visa runs” to nearby airports to refresh their time in Taiwan. The border closure has left foreigners facing the imminent expiration of their visas with the prospect of being forced to fly to their home countries in the midst of a global pandemic.

The foreign ministry has said exceptions will be made for those who have an existing illness or who cannot fly back to their home country.

It has left affected foreigners hopeful that Taiwan will follow the lead of others, such as Indonesia and the European Union’s Schengen area, in providing no-questions-asked visa extensions for those currently in Taiwan and unable to make visa runs or otherwise easily leave the country.

The only serious opposition the decision to close the borders faced came from those who wished it had been done sooner.

Taiwan on Monday added more countries in Europe and the Middle East to a list of high-risk areas from which incoming travelers would have to go into mandatory quarantine. The list did not extend to all of the United States and also excluded other countries, especially in Asia, where there are community outbreaks.

The government faced mounting pressure to require a 14-day quarantine for all incoming travelers or to close the borders to nonresident arrivals entirely as its confirmed cases more than doubled.

Taiwan also mandated that all travelers arriving from Europe and some Middle Eastern destinations between March 5 and March 14 go into quarantine until two weeks after their arrival date. This decision was made after some travelers who visited areas in those regions tested positive for the coronavirus upon returning to Taiwan.

Taipei and New Taipei are expanding their capacity of “quarantine hotels” for those required to undergo quarantine who do not have residences in Taiwan.

Over 1,000 Taiwanese tourists remain abroad at present, along with thousands of Taiwanese students who are expected to return to the country over the coming weeks.