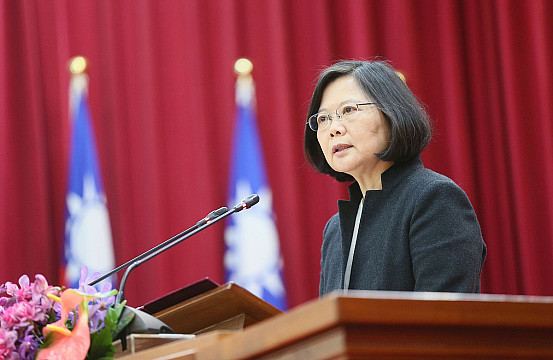 Taiwan President Tsai Ing-wen, speaking one day after protesters flooded the streets of Hong Kong yet again to oppose the city’s controversial extradition bill, called their demands “justifiable” and urged the Hong Kong government to listen to its citizens.

“We see people in Hong Kong taking to the streets to voice their demands,” Tsai said on July 2. “We hope the Hong Kong government can listen to the voices of the people and face the issue with sincerity. I believe that’s the way to solve conflicts in society.”

Tsai and her administration have been vocal in their opposition to the bill, which would allow Hong Kong authorities to extradite suspected criminals to China, where they would not be guaranteed fair trials.

Foreign Minister Joseph Wu also expressed his support for the latest protest, which took place on the anniversary of Hong Kong’s handover to China in 1997. “It’s clear the [Chinese Communist Party] regime’s ‘one country, two systems’ is nothing but a lie,” Wu tweeted. “I urge the global community to support the people’s struggle for freedom and fully democratic elections.”

Hong Kong’s protests have received significant attention in Taiwan, where they remind many voters of their own potential future should Taiwan be ruled under the “one country, two systems” model of governance long touted by Beijing. Chinese leader Xi Jinping reiterated his desire to bring Taiwan under such a framework in a January speech, citing Hong Kong as an example.

Taiwan has been ruled independently by the Republic of China (ROC) government since 1945 and has since resisted efforts by the People’s Republic of China to bring the island under its rule. Its present-day commitment to democracy has inspired many people from Hong Kong and Macau, who are applying for permanent residency in Taiwan in historic numbers, according to a recent report from the Macau Daily Times.

On Monday, Hong Kong democracy advocate Joshua Wong spoke with the secretary-general of Tsai’s Democratic Progressive Party (DPP) by video chat about the effects of the “one country, two systems” formula. DPP officials have previously met with Hong Kong students in Taiwan, who have organized rallies in Taipei to show solidarity with protesters in Hong Kong.

The Hong Kong protests provide a potential political boost at home for the DPP, whose most influential figures have consistently expressed their support. Lawmakers from the opposition Kuomintang (KMT), which traditionally favors closer ties with Beijing, have been less consistent ahead of Taiwan’s upcoming January 2020 presidential election.

Kaohsiung Mayor Han Kuo-yu, who is currently projected to edge out Foxconn founder Terry Gou for the party’s nomination, sparked outrage when he initially told reporters in June he did not know about the protests.

Rival KMT presidential candidate Terry Gou has denounced “one country, two systems” as a failure in Hong Kong and distanced himself from his ties to powerful business and political figures in China. On Tuesday, Gou criticized Hong Kong authorities for using violence against protesters after they stormed Hong Kong’s Legislative Council on Monday and occupied the complex for 10 hours.

Tsai, who is running for re-election after winning a contested DPP primary last month, said the occupation by protesters – in which they smashed windows and portraits of China-friendly officials – was “all part of what happened in the process.”

Hong Kong’s protests have themselves become a campaign issue in Taiwan, where voters increasingly see the country’s sovereignty as a primary political concern.

On June 16, thousands of Taiwanese joined a Taipei rally in solidarity with Hong Kong protests organized by Hong Kong students and Taiwanese civic leaders, including organizers of the 2014 Sunflower Student Movement. Students at dozens of Taiwanese universities have released videos opposing the proposed extradition law.

But the protests have garnered less attention from Taiwanese media outlets considered to be editorially pro-Beijing, such as the newspaper China Times and the TV station CTiTV, which have given minimal coverage to the protests. China Times has taken to burying news of the protests well within the paper, far from the front page.

On June 23, Taipei was again the scene of a massive protest, this time against the alleged infiltration of Chinese funding and influence into Taiwanese media, amid fears that Beijing may try to use influence campaigns to back the eventual KMT candidate in January’s election. The DPP has signaled it intends to respond by passing new legislation.

In the meantime, the DPP continues to prioritize laws and amendments containing punitive measures for certain interactions with Chinese authorities. On Wednesday, Taiwan’s legislature passed rules that could revoke the pensions of retired military officers who harm “national dignity” at events hosted by groups connected to the Chinese Communist Party by partaking in actions such as saluting the Chinese national anthem.

At present, Tsai continues to perform well in projected matchups against Han, Gou, and fellow KMT candidate Eric Chu – and her support of the Hong Kong protests, along with her consistent opposition to a “one country, two systems” formula in Taiwan, continues to galvanize her base.