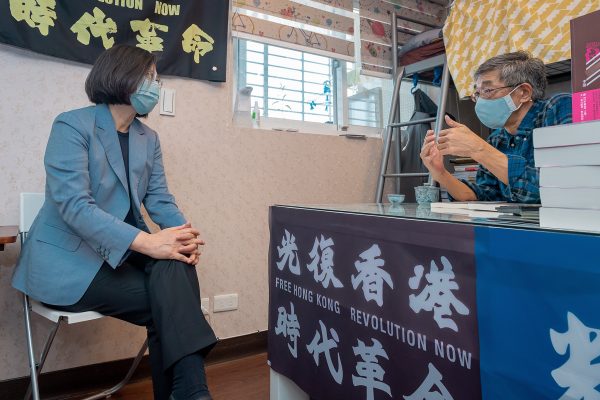 A week of intense debate over how Taiwan’s government should assist Hong Kong asylum seekers ended with a rare show of bipartisan unity as Taiwan’s four largest political parties signed a joint statement in solidarity with the pro-democracy movement in Hong Kong.

President Tsai Ing-wen faced pushback from opposition parties earlier in the week after saying she would consider suspending the Act Governing Relations with Hong Kong and Macau for security reasons in response to Beijing’s plans to impose a national security act in Hong Kong. That decision was passed Thursday by China’s legislature.

However, Tsai said Thursday her cabinet would draft a plan to offer humanitarian assistance to Hong Kongers, hundreds of whom have fled the city for Taiwan since pro-democracy demonstrations intensified last June.

“Taiwan will not sit by and watch democracy, freedom, and human rights be degraded in Hong Kong,” Tsai wrote in a Facebook post in Chinese.

The cabinet could announce its plan as early as next week.

It is unknown whether the new plan will address the long-time concerns of civil society groups, who have pointed out that existing regulations ease immigration and visa procedures for Hong Kongers eligible for study, work, or investment visas, but not for asylum seekers.

Taiwan does not have formal refugee legislation, and asylum cases are processed on an ad hoc basis.

In the past, the Tsai administration has deferred to existing laws, saying they are sufficient to handle the needs of Hong Kongers and other asylum seekers who want to stay in the country.

But many Hong Kongers, especially young protesters, have found difficulties staying in Taiwan without legal status. Although authorities, in practice, adopt a flexible policy toward extending their temporary visas, some young Hong Kongers have fallen victim to scammers and other bad actors who have falsely promised residence permits or other assistance.

Friday’s joint statement, which came from Taiwan’s legislature, asked the Taiwan government to provide assistance to Hong Kong residents as mandated by the Act Governing Relations with Hong Kong and Macau.

Article 18 of that act states Taiwan can provide assistance to Hong Kong and Macau residents should political situations in their home territories deem this necessary.

Taiwan has never publicly utilized the act, in part due to a fear of antagonizing Beijing. Although Taiwan has quietly extended the temporary visas of many Hong Kong residents, its government has not provided them with financial or other direct assistance, leaving them reliant on religious, community, and nongovernmental organizations.

This led to earlier criticism of Tsai’s proposal to consider suspending the act — not only from the New Power Party (NPP), which has strongly supported the Hong Kong protests along with a domestic asylum law, and the Taiwan People’s Party (TPP) of Taipei mayor Ko Wen-je, but also from the opposition Kuomintang (KMT), which generally adopts a friendly stance toward Beijing.

In response to Tsai’s suggestion, KMT chairman Johnny Chiang accused Tsai and her Democratic Progressive Party (DPP) of distancing themselves from Hong Kong after winning the election. The NPP and TPP caucus whips also said abolishing the law would go against the DPP’s stated support of Hong Kong’s democracy protests.

But Tsai’s cabinet insisted this was not their intention. Chen, of the Mainland Affairs Council, said Thursday a suspension of the act would depend on whether Beijing’s national security law for Hong Kong, which is expected to be drafted and promulgated this summer, was deemed a security threat to Taiwan.

Chen said the plan being drafted by the cabinet would affect the resettlement of Hong Kongers along with their well-being, although he did not elaborate. He also said the MAC would do its best to have the plan ready within one week.

As he has done in the past, Chen deferred to the existing Act Governing Relations with Hong Kong and Macau when asked whether the MAC would sponsor a refugee bill.

In 2016, a refugee bill passed a first reading in Taiwan’s legislature, but did not advance further. The bill, however, would not have covered residents of Hong Kong, Macau, and China; other legislation addressing residents of PRC-held territories was also shelved.

During Tsai’s presidency, Taiwan has shuttled asylum seekers from China to third countries such as the United States and Canada instead of granting them asylum or a form of temporary protected status.

Most Hong Kongers in Taiwan have not identified themselves publicly for fear of retribution, either in Taiwan or back home, with one exception: Lam Wing-kee, the Causeway Bay bookseller who reopened his bookstore in Taipei in April.

Tsai visited Lam’s bookstore on Friday morning, saying she was there to learn from Lam what assistance Hong Kongers planning to come to Taiwan may need.

Males women that are seeking wedding in houston

10 Explanations Why Digital Recruitment is a lot like Internet Dating

US government contractors told to prove they have no Huawei ties