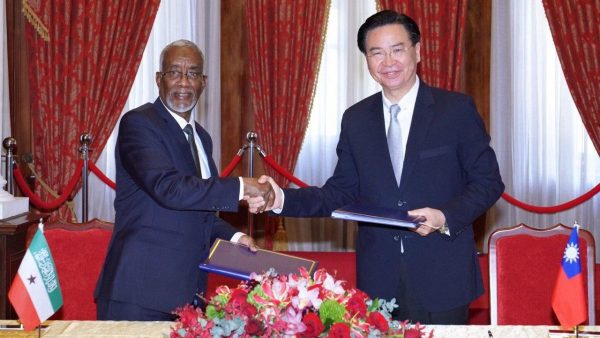 Taiwan has seen its formal diplomatic relations dwindle since President Tsai Ing-wen took office in 2016. The country, due to global pressure from Beijing, now has ties with just 15 other states.

Taiwan’s foreign ministry last week made an unusual move to reverse the trend by announcing the establishment of relations with Somaliland, an autonomous region recognized by no other country – although Taiwan could potentially become the first.

Taiwan Foreign Minister Joseph Wu said in a July 1 statement it had agreed to forge ties with Somaliland due to “friendship and a shared commitment to common values of freedom, democracy, justice and the rule of law.”

Taiwan and Somaliland have agreed to mutually set up representative offices, Wu said last week, although the two sides stopped short of announcing an intention to formally recognize each other. Both Taiwan and Somaliland plan to appoint a senior diplomat to each new office, along with four additional officers, he said.

The two sides “will engage in cooperation in areas such as fisheries, agriculture, energy, mining, public health [and] education,” he said.

Somaliland, which broke away from Somalia in 1991, has avoided much of the conflict experienced by its southern neighbor and established an independent government, holding several democratic elections and maintaining its own currency and borders. Somaliland, like Taiwan, is not a member of the United Nations.

Taiwan’s move to open a representative office in Somaliland may be a path back to increased prominence in Africa, where the small southern nation of eSwatini is now its only formal ally. Both Burkina Faso (in 2018) and Sao Tome and Principe (in 2016) switched ties from Taipei to Beijing after Tsai’s election.

Beijing has prioritized political and economic relations with African nations as part of its Belt and Road Initiative, carrying the additional effect of decreasing Taiwan’s influence on the continent. Taiwan, however, still strives to maintain a presence in Africa, routing surgical face mask donations to non-allied countries through the Vatican – one of Taiwan’s 15 formal allies – during the coronavirus pandemic.

Somaliland also resisted pressure from Beijing in the process of establishing ties with Taiwan, which Wu said on July 1 was the culmination of a process that began in February.

The Chinese ambassador to Somalia met twice with Somaliland officials to discourage ties between Somaliland and Taiwan, numerous reports indicated earlier this week, saying China would open a representative office in the Somaliland capital of Hargiesa should they break the agreement with Taiwan.

On Tuesday, Taiwan Foreign Ministry spokesperson Joanne Ou criticized China for attempting to interfere in Taiwan’s sovereignty, saying, “Taiwan is Taiwan. The country is not part of the People’s Republic of China, and the Chinese government has never ruled Taiwan for a single day.”

Taiwan’s ties with Somaliland could be a harbinger of a new, more confident diplomatic approach as the ruling Democratic Progressive Party (DPP) sheds the imagery of the Republic of China (ROC) in favor of a Taiwan that Tsai said in January is “already independent” and has no need to declare independence.

The new office in Somaliland will notably be called a “Taiwan representative office.” Most of Taiwan’s diplomatic outposts use the terms “Taipei” or “Republic of China.”

Taiwan’s 15 remaining allies are holdovers from the ROC diplomatic network, which began shrinking as countries followed the lead of the United Nations in 1971 and switched recognition from the ROC to the People’s Republic of China.

Taiwan under Tsai has strengthened ties with friendly yet informal allies, such as the United States and Australia, along with South and Southeast Asian countries targeted by Tsai’s New Southbound Policy.

Its Somaliland office, however, marks its first move to establish ties as Taiwan with another state – although it remains to be seen whether the two will recognize each other as countries.

18 Things i have discovered After taking place Over 20 Dates

11 non-creepy techniques to ask somebody out – There are few things more nerve-racking than asking some body away: