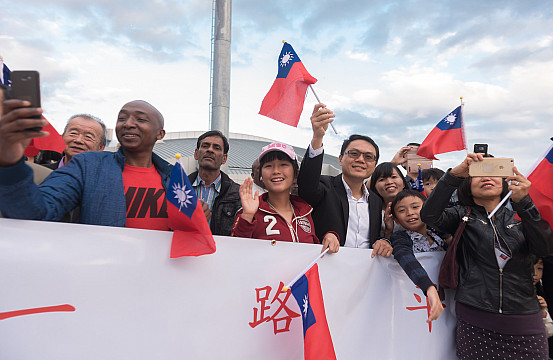 Taiwan’s looming 2020 presidential election looks set to hinge on the country’s eternal “China question” as its ruling Democratic Progressive Party (DPP) continues to move forward with new measures aimed to regulate cross-strait affairs and combat what it calls a campaign of Chinese influence.

Last week, Taiwan’s legislature passed amendments extending the period during which former officials with access to state secrets are banned from traveling to China. On Friday, the presidential office formally notified Ma Ying-jeou and Wu Den-yih, formerly Taiwan’s president and vice president, and members of the opposition Kuomintang (KMT), of the revised travel restrictions.

This is one of many laws prioritized by the legislature’s DPP majority as it seeks to fend off a 2020 electoral challenge from the Kuomingtang, or KMT. While currently in opposition, the KMT won several key local races in November 2018 and its potential presidential nominees continue to outpace incumbent President Tsai Ing-wen in public opinion polls. The KMT favors friendlier ties with Beijing, which severed talks with Taiwanese officials after the DPP won the presidency in 2016.

Taiwan also plans to implement laws targeting around 100,000 Taiwanese living or working in China who have applied for government-issued residency cards since Beijing began offering them last September. These include a bill that would fine card holders who do not report them to Taiwanese authorities and a proposal to bar residency permit holders from running for public office in Taiwan.

An estimated 400,000 to 1 million Taiwanese citizens live or work in China, although the exact figure is unknown as many Taiwanese split their time between both sides of the Taiwan Strait.

Taiwan’s cabinet also approved amendments last week strengthening certificate of origin regulations for products made in China. Companies have been found to affix false “Made in Taiwan” certificates to goods made in China and shipped through Taiwan to evade United States tariffs on Chinese goods.

Analysts say Taiwan has a mixed record of leveraging its position as a key cog in the ongoing U.S.-China trade war. The Tsai administration has prioritized its New Southbound Policy, an economic initiative aimed at strengthening economic ties with neighboring South and Southeast Asian countries in a bid to decrease the island’s dependence on China. The policy has seen successes, including a dramatic uptick in tourism from Southeast Asian nations. But its effectiveness in bolstering Taiwan’s economic presence in target nations, many of whom maintain significant economic ties with China, has been varied, and some tourism schemes have been abused by alleged trafficking and forced labor violators.

Taiwan’s broader legislative strategy of cracking down on China’s presence within the island is more solidly rooted in the DPP’s longtime ideological position of asserting Taiwanese sovereignty with an eye toward eventual independence, along with combating what lawmakers call the looming threat of Chinese influence over media, domestic industry, and electoral politics.

In March, Taiwan’s National Communications Commission fined the broadcaster CtiTV News NT$1 million, or about US$31,850, for failing to fact-check reports of an “auspicious cloud” hovering over three KMT mayors, including Kaohsiung mayor and presumptive presidential contender Han Kuo-yu. CtiTV is owned by Taiwan-based Want Want China Holdings Ltd., which allegedly received up to US$71 million in subsidies from the Chinese government between 2017 and 2018, according to an April report from the Chinese-language Apple Daily. Taiwan’s government has promised to explore the issue of Chinese government subsidies reaching Taiwanese companies.

DPP legislators have long pushed the communications commission to punish purveyors of false information spread by media outlets viewed as taking an editorial stance favorable to the Chinese government. The commission’s former chairperson, Nicole Chan, resigned in April amid criticism that her agency had not combated mis- and disinformation. Chan had previously pushed back against legislators calling for the commission to take a more punitive approach toward potential Chinese influence, citing free speech concerns.

CtiTV was fined an additional NT$1 million in April for failing to fact-check an interview given by a pomelo farmer ahead of a crucial local election, leading to criticism from KMT legislators that the government was targeting outlets seen as pro-KMT and favoring warmer relations with Beijing.

Earlier this month, Want Want’s media arm and the Beijing Daily Group co-hosted a media summit in Beijing, at which Wang Yang, chairman of the Chinese People’s Political Consultative Conference and a member of China’s all-powerful Politburo Standing Committee, said Taiwanese media should give more coverage to the “one country, two systems” framework of governance touted by Chinese leader Xi Jinping. Tsai Ing-wen responded by accusing China of interfering in Taiwan’s internal affairs and press freedom.

Chinese influence in Taiwanese media has long been an issue of concern in Taiwan, but DPP legislators largely avoided passing punitive laws after Tsai first took office in 2016 – leading to criticism from factions within the party, including those associated with former Premier William Lai, who announced in March he would challenge Tsai in the party’s primary. The DPP has not yet decided on its 2020 presidential candidate, but it appears certain that it intends to focus its campaign on warding off what many Taiwanese believe is a looming cross-strait threat to their country’s sovereignty.