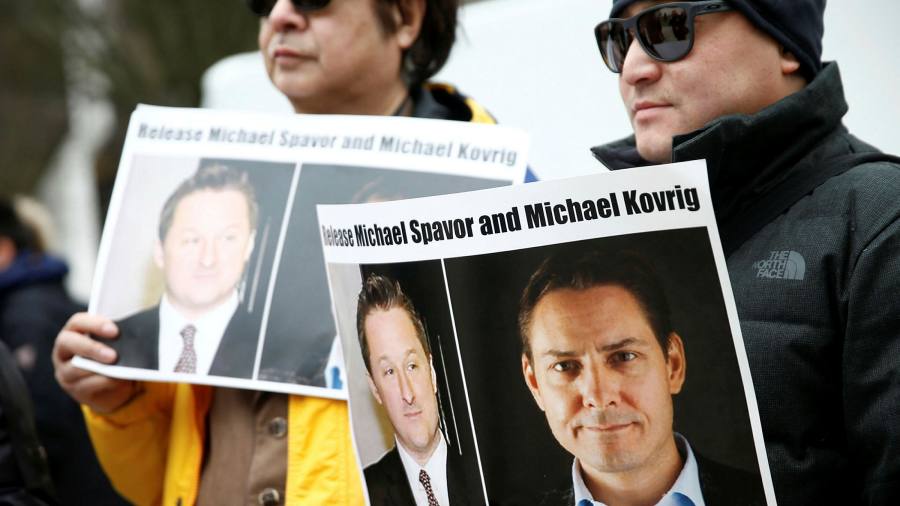 On this day last year, my friend Michael Kovrig, a diplomat and analyst, and Michael Spavor, an organiser of cultural exchanges, were detained on unspecified charges by the Chinese authorities. Their crime? Being Canadian.

The arrests, on “suspicion of engaging in activities that harm China’s state security”, happened nine days after Meng Wanzhou, chief financial officer of Huawei and daughter of its founder, was detained by the Canadian authorities in response to an extradition request from the US.

No one was fooled into thinking the events were unconnected. Nor were they intended to be seen as such. In March this year, two days after Canada’s justice department confirmed that an extradition hearing would take place before a judge, China upped the stakes. Xinhua, the state news agency, dropped the notion of suspicion and reported that Mr Kovrig had “severely violated” Chinese law by stealing Chinese state secrets. In May, the two Michaels were formally arrested — a day after President Donald Trump imposed further restrictions on Huawei in the US.

Ambiguity and juxtaposition are favoured tools of the Chinese Communist party, allowing it to apply pressure but dodge accusations. Even so, the Chinese ambassador to Canada came close to an open admission when, in a January op-ed, talking of Ms Meng and the two Michaels, he mentioned “self-defence” in the same sentence.

Later, a Chinese spokesman discussing why Chinese-Canadian relations were “at a freezing point” commented: “We hope that Canada will take seriously our severe concerns and immediately release Ms Meng Wanzhou, and actively take substantial measures to push China-Canada relations back on track as soon as possible.” You cannot say unfairer than that.

And, of course, the Communist party has form. Back in 2014, when the US asked Canada to extradite Su Bin, a Chinese businessman based in Vancouver, the CCP imprisoned a Canadian couple living in China, Kevin and Julia Garratt, him for two years, her for six months. Su later pleaded guilty to the charge of stealing military aviation designs.

What the two Michaels are suffering in prison, we do not know for sure. But it is likely to mirror the torture of another foreigner, Peter Humphrey, incarcerated in 2013-15, or what Simon Cheng, an employee of the UK’s consulate in Hong Kong, suffered in August.

As Mr Humphrey has testified, the norm is no heating, inadequate washing facilities, poor nutrition, medical treatment withheld, no contact with family, no phone calls, no correspondence, forced to squat for hours on end, rough treatment from guards, lights never off, daily interrogations, no reading matter. At the end, a forced confession.

Mr Kovrig has never seen his infant daughter, born after his arrest. How much more of her growing up must he miss?

Taking hostages is just one of the distasteful elements of the CCP’s diplomacy. Targeting high-profile trade is another. Canada’s canola, pork and beef exports have run into trouble (disruptive for a time, the undeclared bans cannot last, because China has a food security problem — indeed pork exports resumed in November). This tactic has been used against the UK, Norway, South Korea and Australia, among others who have offended politically, although it is worth noting that in all cases their exports to China rose in all those years of being in the diplomatic doghouse.

A variant is the threat that countries will not enjoy Chinese investment, something that unnecessarily worries our politicians. A recent academic paper explained why the UK, for example, does not benefit from Chinese investment. Money is cheap if we need to borrow; Chinese companies do not bring in new technology and management techniques, and they have created few jobs. The flow of knowledge is in the opposite direction.

Meanwhile, the invective from Chinese ambassadors around the globe against their host countries is hardly endearing. In Canada, the erstwhile ambassador talked of “white supremacists”, while in Sweden a minor incident in which some Chinese tourists were made to leave a hotel where they did not have a booking was escalated into an attack on Sweden’s record on human rights and justice.

While such “strong country” behaviour may find favour at home (it is a favourite theme of CCP general secretary Xi Jinping), it is counterproductive abroad. Only 29 per cent of Canadians have a favourable view of China, for example. A Pew poll this month records falling and unfavourable views of China among its neighbours, and in Europe and North America. Leaving aside the US, the EU has now labelled China a “systemic rival”, in the UK the “Golden Era” is coming to look like a Golden Error, and Australia and New Zealand are wondering whether the CCP’s “win-win” is not wearing a little thin-thin.

Does it matter? Perhaps when it comes to foreign countries, beneath the rhetoric of “a community of shared future for mankind”, Mr Xi is of the Caligula persuasion: “Let them hate me as long as they fear me” — or as long as they take my money.

But perceptions do matter, especially at a time when values are returning to foreign policy, not least as a result of events in Hong Kong and Xinjiang. Interference by the CCP in other countries, bullying, cyber and more traditional espionage, to say nothing of hostage-taking, are leading to attitudes such as that expressed by David Mulroney, a former Canadian ambassador to China. Referring to the two Michaels, he said: “We need to start thinking about what we’ve learned from this terrible episode, and how it should shape our future relationship with China.”

Western leaders will increasingly have to take account of their people’s views on China. According to a recent poll, more than 50 per cent of Canadians now oppose having Huawei involved in their 5G networks. Whatever Huawei’s ownership, it is clear from the hostage-taking that the CCP’s relationship with the company is “as close as lips and teeth”. If the Communist party is prepared to act like this over Ms Meng, can it and Huawei be trusted when, in future, a country crosses the CCP’s interests?

The arrests of the two Michaels chip away at mutual understanding and trust. So does that of Mr Cheng, or that of the Japanese professor invited to China by the prestigious Chinese Academy of Social Sciences and detained for buying “sensitive” books at an open bookshop.

As the open letter to the Chinese government in support of Mr Kovrig said, signatories would “be more cautious about travelling and working in China and engaging our Chinese counterparts”. I know a number of China experts no longer going to China just to be on the safe side. Mr Kovrig was not spying; he was helping to promote a better understanding of China. The CCP risks creating an iron curtain of ignorance between China and the west.

This Christmas, Ms Meng will be free to wander around Vancouver and enjoy the warmth of her $15m house. Mr Kovrig will be alone or with someone tasked to report on him, cold, hungry and sleepless. Totalitarianism with technology has brought economic development but not decency. This year also marked the 50th anniversary of the release of Anthony Grey, a British journalist taken hostage for two years during the Cultural Revolution. Barbarity is back, if it ever left.

“Community of shared future for mankind”? If the Michaels’ fate is what that means, I would rather not share it, if you don’t mind, Mr Xi.

Charles Parton is a senior associate fellow of the Royal United Services Institute, a think-tank. He spent four years in the 1990s as a British diplomat in the Sino-British Joint Liaison Group, involved in negotiations for the handover of Hong Kong.