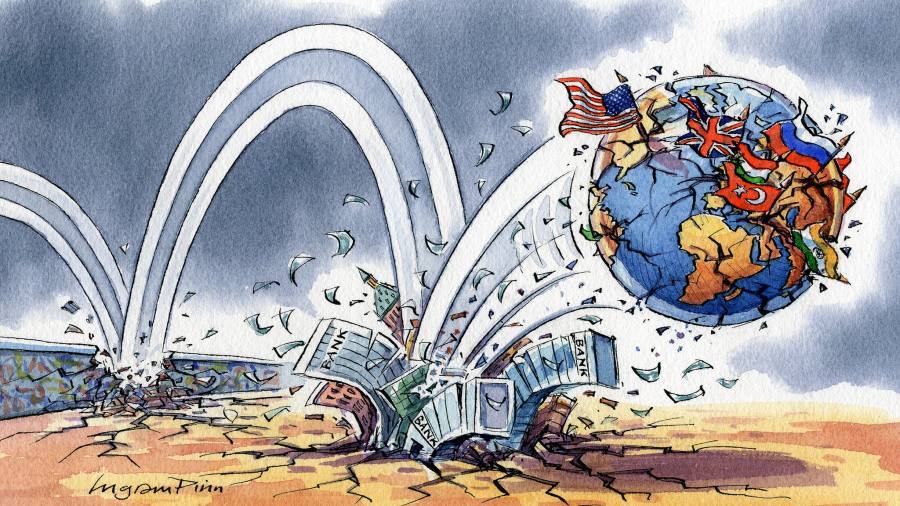 Two great earthquakes shaped the present global order. The first, in 1989, seemed to promise an irresistible march towards liberal democracy and open markets. The opportunity was squandered by those intoxicated with their apparent triumph. A second set of seismic shocks then saw the world turn back towards nationalism and protectionism.

The end-of-history theory of the fall 30 years ago of the Berlin Wall was always, well, ahistorical. There was nothing ineluctable about the advance of political pluralism and market economics. The splintering of Yugoslavia into warring nationalisms should have been sufficient warning against hubris.

And yet. The peaceful dissolution of the Soviet Union, the glad embrace by formerly communist states of parliamentary systems, and rising prosperity in China and other emerging economies gave reasonable cause for optimism that the world was set on a new course.

The UN awoke from cold war paralysis. The US-led expulsion of Iraqi forces from Kuwait secured the backing of a global coalition. European integration looked very much like an exportable prototype. The UN doctrine of “responsibility to protect” underscored collective abhorrence of ethnic cleansing and genocide. So if the destination may not have been assured, the direction of travel indisputably was on the side of democracy.

The Washington-based think-tank Freedom House’s annual survey of rights and liberties pinpoints 2007 as a high-water mark, with a retreat ever since. China and Russia have grown bolder in their embrace of authoritarianism. The Arab spring has turned to winter. Nations such as Turkey, Hungary and Poland have been sliding steadily into illiberalism.

Rising populism and anti-immigrant sentiment in rich western democracies, Freedom House’s 2018 report notes, have offered succour to leaders who “give short shrift to fundamental civil and political liberties”. Among them, it adds, is US President Donald Trump who voices “feelings of admiration and even personal friendship for some of the world’s most loathsome strongmen and dictators”.

You can find half a dozen plausible explanations as to what went wrong. Russia’s fall to economic anarchy threw open the doors to a leader promising to restore order and national pride. China was never going to forget its “century of humiliation” and sign up for a global order led by the US.

As imagined by its friends, the Pax Americana would be that of a benign hegemon overseeing the international peace. The events of September 11 2001 saw Washington repudiate rules in favour of unilateral military intervention. In 1990, US President George HW Bush had laboured to gather broad backing for the war against Iraq’s Saddam Hussein. His son George W Bush declared simply that others were “with us or against us”. Democracy becomes tarnished when its promoters deliver it from the bay of a B-52 bomber.

For its part, the EU overlooked the role national identity had played in eastern Europe’s uprisings against rule from Moscow. Nations that had only recently reclaimed their sovereignty were unlikely to share the postmodern enthusiasm of existing members for the pooling of national decision-making. In the Middle East, the west’s focus on elections overlooked the need for the institutions and conventions that underpin liberal democracy. The ballot box alone was never going to transform Libya.

One way or another, all of these things chipped away at the gloss of superiority bestowed on the west by its victory in the cold war. None were of great consequence when measured against the event that shredded the claims and ambitions of the post-cold-war order.

The 2008 global financial crash, and the subsequent recession, delivered a powerful economic blow to the rich democracies even as it shattered the illusions invested in liberal democracy and globalisation. There it was for all the world to see — the west had got it wrong, and wrong on a scale not seen since the Depression in the 1930s.

For all the gains that accrued from globalisation — and the rising fortunes of hundreds of millions in China, India and elsewhere attest to them — the devotion to unfettered markets enshrined in the so-called Washington consensus had been a catastrophic error. Financial capitalism, it turned out, was inherently unstable; and once destabilised it collapsed like a house of cards. Suddenly, the state-directed capitalism favoured by autocrats no longer seemed anachronistic.

The real damage, though, was done at home. The rise of populists — Mr Trump in the US, the Brexiters in Britain, myriad nationalist parties elsewhere — exposed a fundamental divide. The gains of globalisation had been reaped in the west by the few; the social contract that hitherto sustained public faith in politics and the market had been broken. The elites had grown richer at the expense of the majority.

These populists offer scapegoats in place of remedies. Nor should anyone harbour illusions about authoritarian alternatives. The world is not flocking to imitate Moscow, Budapest and Ankara. Even as they scorn democracy, tyrants and demagogues feel compelled to pay it lip service. There is though one obvious lesson. If they want to restore authority abroad, western leaders must first rebuild credibility at home.