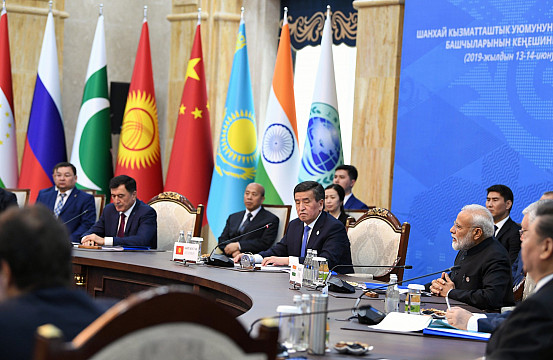 Last week, the Shanghai Cooperation Organization (SCO) gathered for its annual summit, held this year in Bishek, the capital of Kyrgyzstan. At the top of the agenda was the stated need to bolster regional security and combat terrorism and extremism, seconded by a call to promote stability and development in Afghanistan, followed by additional statements to renew investment and economic integration efforts, as well as cultural and humanitarian cooperation.

SCO members are by and large from or bordering Central Asia. The regional grouping is made up of eight official members (China, Russia, Kazakhstan, Kyrgyzstan, Tajikistan, Uzbekistan, India, and Pakistan), four observers (Afghanistan, Belarus, Iran, and Mongolia), and a handful of dialogue partners (Azerbaijan, Armenia, Cambodia, Nepal, Turkey, and Sri Lanka). In its 18 years of existence, its membership and bureaucracy have expanded. While the organization has primarily been touted as one in which its members can build mutual trust and foster multidimensional cooperation, the SCO can also be seen as an entity that reflects shifting power dynamics in this subregion, particularly between China and Russia.

On the surface, the current state of Beijing-Moscow ties appears rosy. 2019 marks the 70th anniversary of diplomatic relations between the People’s Republic of China and the former Soviet Union. In 2001, the same year as the founding of the Shanghai Five (the precursor to the SCO), China and Russia signed a friendship and cooperation treaty. The two countries have also peacefully resolved a territorial dispute along their eastern border.

More recently, Chinese President Xi Jinping has regularly met with Russia’s Vladimir Putin since assuming office. Even the somewhat under-developed economic exchanges are on the upswing: annual two-way trade exceeded $100 billion in 2018 with the goal surpassing of $200 billion by 2020. On a more personal level, not all world leaders make headlines by gifting ice cream to one another as a birthday celebration as Putin did for Xi’s 66th birthday last week, nor does Xi use the moniker “best and bosom friend” loosely to describe strategic partners.

Still, the bilateral relationship is more nuanced than the orchestrated warmth the two leaders like to flaunt. In recent decades, the power dynamics in both economic and political spheres have tilted in China’s favor, in large part due to the precipitous collapse of the Soviet Union and the equally swift economic revolution in China. For example, in 2017, China’s economy accounted for around 15 percent of the world economy, while Russia’s GDP made up just shy of 2 percent, according to World Bank metrics. Meanwhile, China has taken the top rank as Russia’s most important trade partner for the past decade or so, while Russia typically ranks among China’s top 10 to 15 trade partners.

China’s economic rise has no doubt been an integral factor in its pursuit of a greater voice internationally, not only carving out a larger role for itself within existing international institutions but also backing newer, regionally oriented groupings, such as the SCO and the Asian Investment Infrastructure Bank. Conversely, in the decades that followed the disintegration of the Soviet Union, Russia’s economic growth, meanwhile, has ebbed and flowed, seemingly relegating the country to a more junior position within international hierarchy. China’s elevation on the international stage and Russia’s perceived demotion has likely been a stumbling block for more in-depth cooperation between the two. Russia would be reticent to appear subordinate to China’s overt leadership, especially within the SCO, where membership is largely composed of former Soviet states.

In the past few years however, the downturn in ties between Washington and Moscow, as well as Washington and Beijing, namely over trade, may have led the two Eurasian countries to reinvigorate their partnership. Moreover, the Trump administration’s seeming withdrawal from or lack of interest in international leadership and multilateralism has opened the door for other forums like the SCO to develop further in Asia. Yet, as a forum that has produced few tangible measures of progress, will the latest amelioration of relations between Beijing and Moscow facilitate greater SCO coordination and action?

Beyond discussions of counterterrorism coordination and shared security concerns, sustainable economic development and investment are topics of interest. Since 2015, leaders have hinted at the integration of China’s Belt and Road Initiative (BRI) with Russia’s Eurasian Economic Union (EAEU). Putin has stated that the BRI fits the EAEU’s objectives and that China should accommodate the EAEU, while Xi has urged SCO members to synergize BRI with other regional initiatives like that of the EAEU. Yet, scenarios in which a Russia led by Putin willingly relinquishes the dominant role are few and far between. Xi is equally unlikely to wither under any resistance to BRI given the initiative’s scope and ambition. Furthermore, Central Asian states maintain a degree of skepticism vis-a-vis Chinese inbound investment. Such a merger of the Eurasian Economic Union and the Belt and Road Initiative may individually benefit China and Russia, but is unlikely to assuage broader regional concerns. As such, competition seems poised to prevail over deeper cooperation.

Russia has taken over the SCO’s chairmanship for the next year, and the July 2020 SCO summit will be one to watch as Russia plays host. The central question in the years to come will be whether Beijing and Moscow capitalize on their political partnership or cede to regional competition that could drive a deeper wedge between the dynamic neighbors and stymie the evolution of the SCO.

Online dating sites is definitely a ever more popular method for singles for connecting with each other.