Chief Executive Carrie Lam Cheng Yuet-ngor is still communicating with various sectors of Hong Kong society after the SAR government shelved the amendment bill and suspended the legislative process. Some of the secondary school principals who signed a petition urging the government to shelve the fugitive law amendment legislation earlier were pleased to see the chief executive heed popular wishes. Now that the government has halted the legislative process of the fugitive law amendment bill, the great majority of Hong Kong society hopes all parties concerned will now calm down and respond positively to the government’s goodwill, even if they still have differences over the issue.

As a matter of fact, the storm over the fugitive law amendment bill has already dealt a heavy blow to Hong Kong. It has not only divided Hong Kong society into two confrontational sides again but also seriously obstructed the operations of the SAR government, particularly the Legislative Council. As long as the fight between the two sides continues, Hong Kong society cannot stop bleeding. That is why all sectors of Hong Kong society hope it ends sooner rather than later. The government has already shown its goodwill by positively responding to popular wishes. The turmoil started because of the fugitive law amendment bill. Since the issue no longer exists, it is pointless to continue fighting for something that is no longer there. 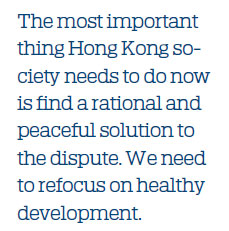 The fugitive law amendment bill is not the most urgent issue facing Hong Kong society anymore and we have no reason to continue wrestling over it. Let’s turn our attention back to Hong Kong’s development and support the SAR government in focusing on economic development, improving people’s well-being, addressing deep-rooted structural problems and creating more and better career opportunities for young people. External causes of various problems impact Hong Kong society through people’s personal concerns. The turmoil triggered by the fugitive law amendment bill reflects some of the most deep-rooted structural issues that have been plaguing our city. Many young people felt helpless and needed an excuse to vent their frustration, hence the shocking, violent protests against the fugitive law amendment legislation. Leaving the controversy behind and starting over is the only way for Hong Kong to heal the bleeding wound and get back on the right track of maintaining prosperity and stability.

However, people should not let their guard down just yet, because some radical opposition figures refuse to stop making unjustifiable demands, such as prosecuting police officers who stopped violent protesters from occupying the government headquarters and LegCo Complex at Admiralty. No governments in the world would compromise the rule of law because of political blackmail.

The criminal law never considers the political background of a person who broke the law. No matter what the excuse is, political or otherwise, protesters do not have a “license to break the law” in Hong Kong or any other society under the rule of law. The only thing more outrageous than being above the law is prosecuting law enforcers for doing their job.

Also, the radical opposition has been pouring fuel on the fire to make the situation worse than it already is. For example, when Joshua Wong Chi-fung was released after completing his prison sentence for being in contempt of court at the end of the illegal “Occupy Central” movement in 2014, he immediately went to Admiralty and ordered some protesters to picket the chief executive’s office. Apparently some radical opposition figures have not profited enough from the political turmoil and are trying to stir up more confrontation, the more contentious the better for them.

All sectors of Hong Kong society should raise their voices to condemn politicians who keep trying to hurt Hong Kong one way or another. The Hong Kong Police Force should stop those radical opposition figures from doing more damage to public order. Police officers have performed their duty extremely well throughout such a challenging time. They are the pillars of social stability and public order in Hong Kong; no one can diminish their contribution to the well-being of all Hong Kong residents. The most important thing our society needs to do now is find a rational and peaceful solution to the dispute. We need to refocus on healthy development. No one can say they love Hong Kong without opposing and condemning attempts to divide Hong Kong society.

The author is a senior current affairs commentator. This is an excerpted translation of his Chinese article published earlier in Hong Kong Commercial Daily.