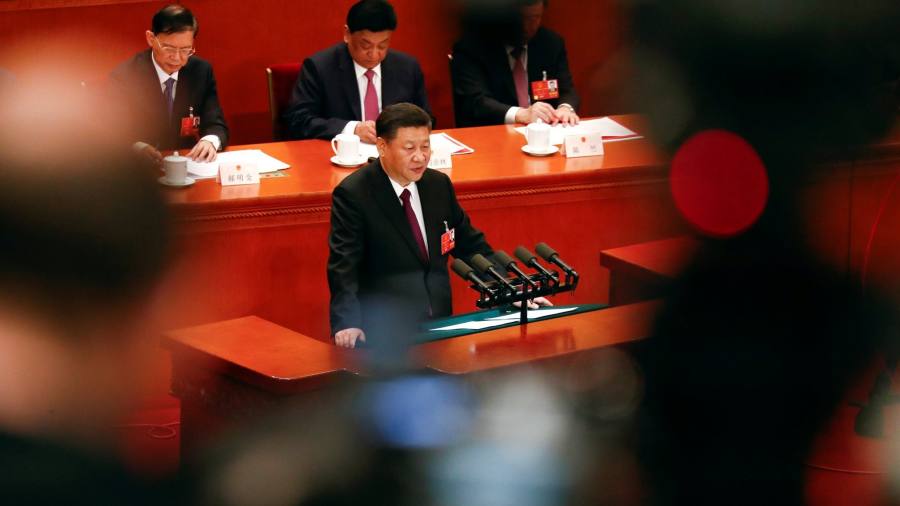 China wants to be a superpower, or even the global superpower, by the middle of this century. That is the meaning of Xi Jinping’s second “centennial goal”: becoming a “strong, democratic, civilised, harmonious and modern socialist country” by 2049, the 100th anniversary of the founding of the People’s Republic of China. It won’t be so.

Whether you use the original definition of superpower status — the possession of pre-eminent military power and the ability to project it globally — or whether you broaden it to include economic, political, cultural and intelligence power, and the ability to shape international governance, what matters is the long-term capacity to pay for it all.

The costs China bears today are small compared with those it would need to shoulder — for decades — as a superpower. Its military expenditure falls far short of America’s. Domestically, the costs of repression and stability are said to be even greater than the budget of the People’s Liberation Army. An ageing population of 1.4bn requires a comprehensive social security system. The costs of rectifying the environment are mind-boggling.

Assume no US growth until 2049 and China’s GDP would need to increase at nearly 6 per cent every year (few believe it has been that high of late) just to match America’s 2018 per capita income. Such smooth growth defies all empirical experience. It also assumes that the renminbi peg survives in perpetuity. George Magnus, in his excellent book Red Flags, lays out why the peg is crucial and why it will break within five years.

China had been driving up an economic cul-de-sac and needed to find a new road. Hence, in 2013 Xi Jinping launched his reform programme, declaring that the economic model of the time was “uncoordinated, unbalanced and unsustainable” — words used earlier by former premier Wen Jiabao and repeated in 2017 by politburo member Yang Jiechi. That year, a think-tank of China’s National Development and Reform Commission described reform progress as minimal. Today, the Rhodium Group’s excellent quarterly evaluations assess reform progress as rudimentary.

This is no surprise. There is a contradiction at the heart of reform, between the Leninist need to hold on to the levers of economic power (to avoid the rise of economic interests that might turn political and mutter “no taxation without representation”) and giving more play to the market.

Reform aside, there are three obstacles to China’s long-term economic growth. The first is the debt problem. At some stage, the costs of debt have to be borne, whether by people, companies or the government, and whether by inflating debt away, increasing taxation or cutting public investment and spending.

The second obstacle is demographics. While China’s population will continue to grow for perhaps a decade, its labour force is already shrinking — precipitously. China’s official birth rate of 1.6 children per woman is one of the world’s lowest, even as its population ages. The costs of social security, of caring for the elderly, will be enormous. Labour productivity must rise very quickly.

Another demographic fact is worrying in terms of instability: gender imbalance. The old one child policy reinforced cultural preferences, meaning that over the coming decades China will have between 30m and 40m men in the sexually active bracket of 20-40 years of age who will not find a partner. Their frustration may lead to unrest and instability.

The third problem, and perhaps the greatest, is a looming water crisis in 12 northern provinces that account for 41 per cent of China’s population, 38 per cent of its agriculture, 46 per cent of its industry and 50 per cent of its power generation. Neither water transfers nor desalination can prevent severe economic, social and political dislocation. What is required, if it is not already too late (and climate change looks likely to make the region drier), are massive changes in agriculture, industry and people’s lifestyles. A prime instrument would be the correct pricing of water. But raising the price by many times, as the head of one Beijing water company suggested (only to be told to pipe down), is politically impossible: the Chinese Communist party (CCP) fears that the resulting dislocation and inflation would cause unrest.

It is commonly said that if any government is capable of pushing through change, however unpopular, it is the CCP. If that were so, Mr Xi would not have expended so much energy in cajoling and excoriating officials for failure to implement his policies. The governance model is flawed: 1.4bn people cannot be governed using top down fiat and inspection, while eschewing self-regulation.

Yet Mr Xi has specifically turned his back on four useful allies: the rule of law and an independent judiciary, which is essential for business and private sector confidence; a free press, for example to help expose corruption or abuse of the environment; civil society, from where ideas, innovation and pressure flow; and some sort of political accountability, to encourage officials to work for the benefit of the people and not of themselves or the party.

All four of those allies weaken party controls and risk leading eventually to a pluralist system, undermining one party rule. So the CCP rejects them.

To the factors above can be added a lack of trust by the people in the CCP. Nationalism is an inadequate substitute. To give one example of this lack of trust, consider the internationalisation of the Chinese currency. A superpower must surely have a currency that is freely traded throughout the world. But what would happen if China opened its capital account? Because the people don’t trust the party, today’s capital flight would become a flood. Investors would abandon the current destination of their savings, the domestic housing market. Its collapse would precipitate a recession and unemployment. And the number one fear of the party is instability caused by unemployment. If you claim credit for all good things, you also earn discredit for the bad.

Could innovation come to the CCP’s rescue? A high-tech society with high productivity might help China grow out of debt, need fewer workers and cope with less water. Mr Xi himself in a January 2016 speech said that “Innovation is China’s Achilles heel”. He may be right.

The devotion of great resources to scientific research may help China to produce exciting technologies. But this might, as in the Soviet Union, be on too narrow a front. Many scholars (admittedly, western) have concluded that the motor for the rise of Europe was the free flow of ideas. A taste for iconoclasm and a refusal to accept convention may also have helped. CCP control is sympathetic to none of those. Culture, reinforced by politics, does not favour the unconventional. And with prioritisation of state-owned enterprises over the private sector, added to tightened party control over business, education and society, it is legitimate to wonder whether in future the likes of Huawei, Alibaba and Tencent will emerge as easily.

Some point to the CCP’s flexibility: in 1978, who could have imagined that it would slough off so much dogma? But there is an important difference between the first 30 years of reform and the last 10. Earlier, the interests of reform and of party members were heading in the same direction: much money could be made, legitimately and not so legitimately, by following the dictates of reform. Now, even with a restricted role for the market, they are heading in opposite directions. The war on corruption reinforces this.

The likelihood is that we have reached “peak Xi”, or perhaps “plateau Xi”, since China will continue to be a powerful country. In the recent words of Chen Deming, minister of commerce until 2013: “Do not take it for granted that China is number two, and do not make the assumption that we will be the number one sooner or later.”

What does this mean for liberal democracies? If China’s rise is not inexorable (nor its collapse inevitable: it will remain a major power), we must in the meantime be more resolute in defending our security, interests and values. We should resist any tendency towards pre-emptive kowtowing to China. We must promote what is essential for long-term prosperity, not least respect for international law, which China may further flout as its problems increase.

In sum, despite our present woes, we should have more faith in our systems. Their virtue is not English oak, but more Chinese bamboo: they bend in the buffeting winds, but don’t break.

Those who said that China’s rise would lead to convergence with liberal democracies are now accused of getting it wrong. But the obverse of the same coin, that unless China changes its systems, it has no chance of being a superpower, may be correct.

Charles Parton is a senior associate fellow of the Royal United Services Institute, a think-tank. He was an adviser to the UK House of Commons select committee on foreign affairs inquiry into China.