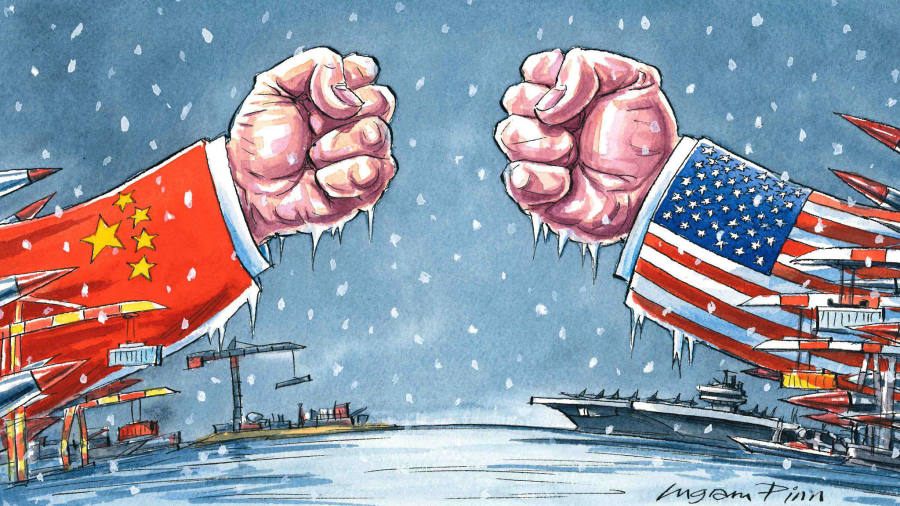 The unnerving thing about America’s trade war against China is that it is just the start. Donald Trump is fixated on trade balances and tariffs. The US president hankers for the 1950s, when US industry swept aside all before it. Among the swelling community of China hawks in Washington, however, resetting the terms of trade is only an opening shot.

While American and Chinese negotiators were trying and failing to reach a trade deal last week, Mike Pompeo, the US secretary of state, was visiting London. His message to Theresa May’s government? Allow China’s Huawei to build any of Britain’s next generation, or 5G, communications network and you can say goodbye to the special relationship.

Six thousand miles away, US warships were steaming through the South China Sea. At the head of a small flotilla of Japanese, Philippine and Indian vessels, the US navy raised another banner. As much as China turns disputed rocks into military outposts to stake its claim to the waters, the US will respond with more freedom of navigation patrols.

Back in Washington, prominent Republicans were lending support to a new anti-Beijing lobby group. The Committee on the Present Danger: China invokes the cold war against the Soviet Union. The Texan senator Ted Cruz, his colleague Marco Rubio from Florida, and Newt Gingrich, the former Speaker of the House of Representatives, are among those echoing its warnings that China has started a new arms race.

Mr Trump says he hopes to patch something up on trade with Chinese president Xi Jinping when the two meet at the G20 summit in Japan next month. The China hawks have moved on from tariffs. They want essentially to decouple the two nations’ economies.

The president has leaned in this direction with tighter controls on Chinese investment in sensitive sectors of the US economy and new restrictions on Chinese students at US universities. Mr Trump’s answer to complaints that high tariffs are hitting US companies with plants in China is straightforward. Bring the production home. Disentangling American and Chinese supply chains would restore national independence.

Until quite recently, China was viewed as an economic competitor playing an unfair game. It cheated the system by manipulating trade and investment rules, forcing technology transfer from western partners and stealing intellectual property. In the US, the anger at such practices has been widely shared by Democrats as well as Republicans. Europeans have voiced the same irritation with China’s restrictive investment conditions and asymmetric trade rules.

The trade narrative is now being subsumed into a much more alarming one. Economics has merged with geopolitics. China, you can hear on almost every corner in sight of the White House and Congress, is not just a dangerous economic competitor but a looming existential threat. Beijing may not have the same ideological ambitions as the Soviet Union, but it does threaten US primacy. It needs more than a level playing field for trade to confront this challenge.

The shift was foreshadowed in Mr Trump’s National Security Strategy and in the National Defence Strategy produced by the Pentagon. “China is using economic inducements and penalties, influence operations, and implied military threats to persuade other states to heed its political and security agenda,” the first document says. As for the South China Sea: “China has mounted a rapid military modernisation campaign designed to limit US access to the region and provide China a freer hand there.”

The defence strategy aims to dispel any doubt. “For decades, US policy was rooted in the belief that support for China’s rise and for its integration into the postwar international order would liberalise China. Contrary to our hopes, China expanded its power at the expense of the sovereignty of others. China . . . is building the most capable and well-funded military in the world, after our own”. The goal, the Pentagon says, is, “Indo-Pacific regional hegemony in the near-term and displacement of the United States to achieve global pre-eminence in the future”.

The irony is that Mr Trump’s focus on the nuts and bolts of trade during 11 rounds of talks between Washington and Beijing, and his habit of showering compliments on Mr Xi, has obscured this profound shift in US policy.

Nothing stirs US neuralgia so much as technology. Beyond the temporary jolt delivered by losing the space race to the Soviet Union during the 1950s, the US has been consistently confident of its technological lead over adversaries.

No longer. At a recent gathering of US policymakers and experts, speaker after speaker took to the podium to voice fears that China is stealing a march in harnessing 5G digital technology and artificial intelligence applications to its military ambitions.

The danger in all this speaks for itself. Treating China as a certain enemy is a sure way to persuade Beijing that it should behave as such. Mistrust begets mistrust, which in turn could provide the spark for open conflict.

China is no innocent — witness the ever present cyber attacks on western militaries and vital infrastructure. But demonising everything it does simply opens up the path from a trade war to something much rougher. What the two nations need above all are common rules of the road to avoid escalation. Otherwise we are heading towards an altogether hotter war.