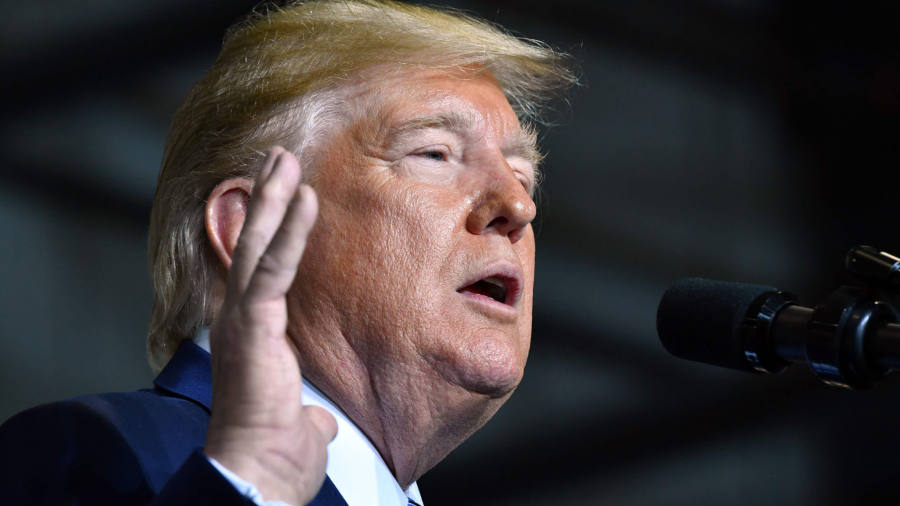 Donald Trump engineered a remarkably quick retreat on Tuesday from his latest aggressive move in the trade war with China, delaying some new tariffs on consumer goods that were set to take effect on September 1 for more than two months, until mid December.

Yet there are scant hopes that the gesture will pave the way for a resumption of serious negotiations leading to a lasting peace in the trade war consuming Washington and Beijing.

“This seeming de-escalation in ongoing tensions may be a temporary reprieve,” said Elena Duggar, associate managing director at Moody’s, the rating agency. “Relations between the world’s two largest economies will remain contentious, punctuated with occasional steps towards compromise,” she added.

Mr Trump’s move was accompanied by an unusual acknowledgment that the deepening economic conflict with Beijing could have negative repercussions for US households, which he has so far strenuously denied.

“We are doing this for the Christmas season, just in case some of the tariffs would have an impact on US consumers. So far, they’ve had virtually none,” Mr Trump said, as he prepared to board Air Force One to travel from New Jersey to Pennsylvania.

The explanation suggested some anxiety within the White House about the political fallout heading into Mr Trump’s re-election campaign if the economy does take a hit because of the enduring stand-off with China.

But the tariff delay also fit Mr Trump’s well-worn pattern of shifting to a less hostile stance after ramping up tensions and testing the market’s tolerance of his administration’s brinkmanship — suggesting that Tuesday’s action was a more limited, tactical withdrawal.

The sudden reversal from Mr Trump — less than two weeks after he had announced the new tariffs were imminent out of frustration with Beijing’s unwillingness to make concessions — was greeted with relief by US equity investors. The benchmark S&P 500 rose 1.5 per cent on Tuesday.

Markets were also encouraged by news that top US and Chinese officials spoke by phone on Tuesday in a conversation that Mr Trump described as “very productive” — and vowed to hold another call in two weeks.

Yet the two sides still face huge hurdles to get an agreement back on track, amid mutual distrust including on very basic issues, such as the resumption by China of the purchase of US farm goods, which Mr Trump has continued to demand without any response from Beijing.

The US president’s posture towards China is still tilting more towards escalation than accommodation. Mr Trump continued to attack Beijing on Twitter on Tuesday for the “massive devaluation” of its currency. In addition, although slightly more than half of the planned tariffs due to kick in on September 1 have been delayed, the rest will still be hit next month. On Capitol Hill, Democrats mocked the shift as disingenuous. “Postponing tariffs on video game consoles and pet toys is giving Trump the stock market bump he wants but he’s still going ahead with tariffs on books, school supplies and clothes that will hit working Americans the hardest,” said Ron Wyden, the Oregon senator and top Democrat on the finance committee.

Corporate America was not particularly encouraged either. “Simply delaying harmful tariffs on a select number of particularly impacted products from September 1 to December 15 is not a solution,” said Peter Robinson, president of the US Council of International Business, a lobby group for big multinationals in Washington. “It is crucial for the United States and China to engage in continuous discussions in order to reach a negotiated outcome with the goal of removing these tariffs and eliminating market barriers and discrimination.”

Mr Trump’s decision to delay some tariffs may be sufficient to ensure that top Chinese officials follow through on plans to visit Washington for another round of face-to-face negotiations early next month. But it is unlikely to provide the certainty that many businesses are looking for in US trade policy in order to reboot languishing investments, one of the biggest clouds hanging over the economy.

“This is the biggest economic mistake since the passage of the Smoot-Hawley Tariff Act in 1930, which sent our country spiralling into the Great Depression. Continuing down this path will devastate US start-ups and small businesses — many of them will face no-win decisions about shrinking operations and cutting jobs,” said Gary Shapiro, the president of the Consumer Technology Association, a lobby group for consumer electronics companies.