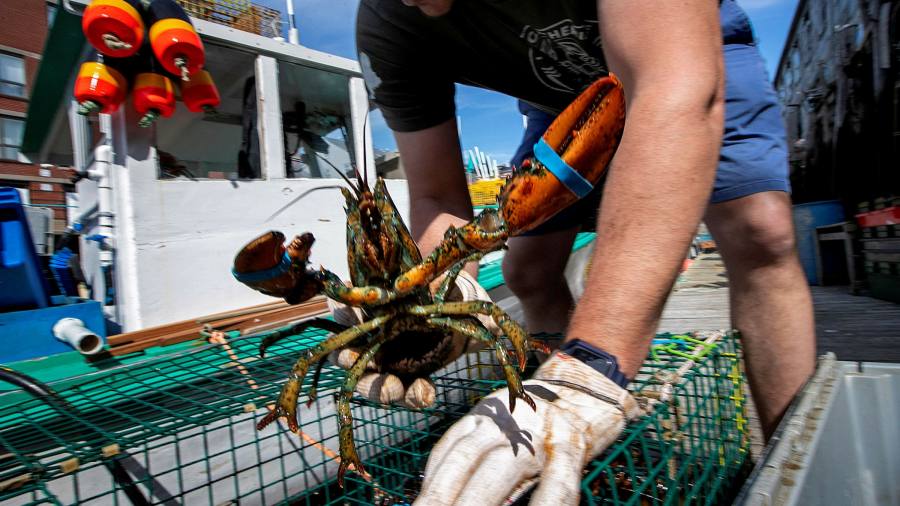 Donald Trump has dangled the renewed prospect of tariffs on European cars if the EU does not lower its duties on American lobsters, a move that threatens to escalate trade tensions between Washington and Brussels.

Mr Trump also ordered Peter Navarro, the White House trade adviser, to identify Chinese products to target for potential tariffs if China did not lower its duties on US lobsters.

“Peter Navarro is going to be the lobster king now,” Mr Trump said at an event on Friday with commercial fishermen in Maine, a major exporter of American lobsters.

Mr Trump said that Europe had been “almost as bad over the years as China in terms of trade”, complaining that the EU could import Canadian lobsters duty-free under the Canadian-EU trade agreement, which has been in force since September 2017.

By contrast, US live lobsters face an 8 per cent duty in the bloc, which Maine’s congressional representatives have said is unfair — especially as American lobster producers look to make up for dwindling sales to China, which slapped a retaliatory 25 per cent tariff on the product in 2018 amid the US-China trade war.

Washington and Brussels are trying to eke out a limited “mini” trade deal. EU trade commissioner Phil Hogan made visits to the US capital this year to discuss a way forward before the coronavirus pandemic took hold.

The two trading partners have been locked in a series of disputes, including a major battle over the state subsidisation of airlines, which has seen the US put 25 per cent levies on a wide range of European and British products.

A WTO decision due this summer is expected to decide the scope of EU retaliation against the US for its support to Boeing.

Mr Trump has repeatedly threatened tariffs on European cars and auto parts since taking office, but has so far not carried through on it.

In May, Mr Hogan wrote to his US counterpart, trade representative Robert Lighthizer, to try and smooth over disagreements as coronavirus ravaged the world economy.

Mr Hogan proposed talks over a joint agenda covering everything from aircraft subsidies to lobster tariffs and shared reserves of medical supplies.

The commissioner also said the EU was seeking to end a two-year dispute over US tariffs to protect steel producers. EU officials have been angered that Washington moved to impose national security-based tariffs on their steel and aluminium products in 2018.

US officials have frequently lamented America’s goods trade deficit with the EU, which has risen from $146bn in 2016 to $178bn in 2019, according to data from the US Census Bureau.

In addition, they have protested against moves by several European countries to impose a digital services tax that would hit some of the largest US technology groups, and have been irritated by the EU’s resistance to big concessions on agricultural market access, which is consistently one of Mr Trump’s top goals.