Ankara has summoned China’s ambassador over a tweet that targeted Turkish politicians critical of the treatment of the country’s Uyghur minority, in a rare show of displeasure with Beijing.

The Chinese embassy said it had “a right to respond” after Meral Aksener, chair of the centre-right Good party, and Mansur Yavas, mayor of Ankara, wrote tweets commemorating a 1990 Uyghur uprising in the Chinese region of Xinjiang.

A tweet from the embassy’s official account, tagging the Turkish politicians, said it “opposes and violently condemns any sort of challenge to Chinese sovereignty and territorial integrity by any person or power”.

Zhao Lijian, the Chinese foreign ministry’s spokesman, on Wednesday said “some people in Turkey made wrong remarks on Twitter that brazenly encouraged terrorists”, adding that “the response of China’s embassy in Turkey was absolutely appropriate”.

Turkey is home to one of the world’s largest communities of Uyghurs which fled the Chinese Communist party’s crackdown on the Muslim minority. But as Ankara has pursued closer diplomatic and commercial ties with China, the diaspora has begun to worry about its future.

Its anxiety has been compounded by an extradition treaty with China that is being considered for ratification by the Turkish parliament, as well as Turkey’s dependence for almost all its coronavirus vaccine supplies on Sinovac, the Beijing-based drug company.

Chinese authorities deny allegations of human rights abuses and describe the clampdown on Xinjiang as an effort to fight terrorism. Zhao and other diplomats have attacked critics on Twitter and elsewhere as part of China’s so-called “wolf warrior” diplomacy to counter global pressure over its treatment of Uyghurs, 1m of whom the UN says are being held in detention centres in Xinjiang.

The diplomatic spat is Ankara’s most public rebuke of China in more than a decade, said Cagdas Ungor, a China expert who teaches at Marmara University in Istanbul.

Turks are broadly sympathetic to the cause of Uyghurs, with whom they share religious and linguistic ties, and “there is a growing gap between government policy and public opinion”, she said. “But economic pragmatism and other factors limit Turkey’s ability to manoeuvre.” 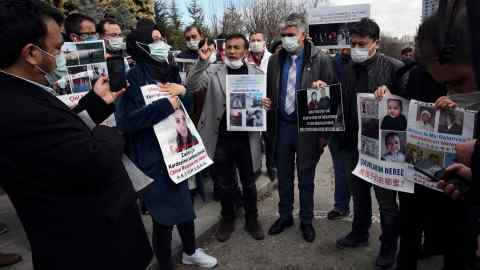 President Recep Tayyip Erdogan, who has positioned himself as a champion of Muslim causes around the world, in 2009 accused the Chinese government of “genocide” against the Uyghurs. But as relations with traditional western partners soured and he turned to Moscow and Beijing, he has become far less outspoken about their plight.

Turkish police have barred protests by Uyghur activists in recent months, although they did permit a demonstration at the Chinese embassy during a visit last month by China’s foreign minister Wang Yi. His Turkish counterpart, Mevlut Cavusoglu, said he had “conveyed our sensitivity and thoughts on Uyghur Turks” at the meeting.

The dispute with the Chinese embassy comes as Turkey awaits shipments of Sinovac’s Covid-19 vaccines. The government says it bought 50m doses of the two-shot CoronaVac, but has so far administered fewer than 18m jabs. Erdogan has said talks are continuing to procure another 50m CoronaVac doses. A country of 82m people, Turkey has only contracted for 4.5m doses from one other producer, BioNTech/Pfizer.