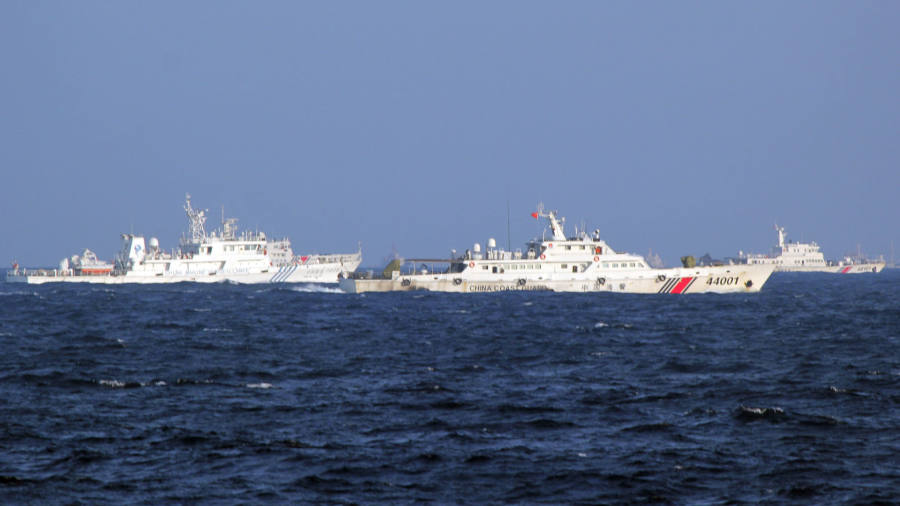 The US has accused China of “coercion” of Vietnam as it seeks to exploit oil and gas in the South China Sea, siding with Hanoi and chastising Beijing in sharp terms over its decision to send Chinese ships to Vietnamese territorial waters.

The US state department said China’s recent dispatch of a government-owned geological survey vessel and armed escort vessels into Vietnam’s offshore exclusive economic zone was “an escalation by Beijing in its efforts to intimidate other claimants out of developing resources in the South China Sea”.

“In recent weeks, China has taken a series of aggressive steps to interfere with [Association of Southeast Asian Nations] claimants’ longstanding, well-established economic activities, in an attempt both to coerce them to reject partnership with foreign oil and gas firms, and to work only with China’s state-owned enterprises,” state department spokesperson Morgan Ortagus said.

China on August 13 redeployed the survey vessel Haiyang Dizhi 8 and escort ships to Vanguard Bank, a area of Vietnam’s continental shelf where it is drilling for gas on two offshore oil and gas blocks operated by Russia’s Rosneft.

Beijing sent the same ship in early July to conduct an extensive geological survey in the area, angering the Vietnamese public in a country where anti-Chinese sentiment runs high.

The Chinese move came after Rosneft’s Vietnamese subsidiary contracted the Hakuryu-5, a rig owned by Tokyo-based Japan Drilling, to begin a new production well in May.

Vietnam has responded by sending its own ships to the area, and has accused China of violating its rights to its coastal waters, which it says are guaranteed under the 1982 UN Convention on the Law of The Sea that defines exclusive economic zones as bands extending 200 nautical miles or 370km from a country’s coast.

Hanoi has also sharpened its criticism of China in recent days, demanding that “China IMMEDIATELY withdraw vessels from EEZ”, in a Twitter message on its government portal on Thursday evening

“Vietnam has made representations to China, protesting against its repetition of that serious violation,” Le Thi Thu Hang, a Vietnamese foreign ministry spokesperson, told reporters in Hanoi on Thursday in remarks published on Friday.

“Vietnam also has demanded that China pull its vessels out of the maritime zones of Vietnam and respect Vietnam’s sovereign rights, jurisdiction and all other lawful and legitimate rights and interests as enshrined under UNCLOS and international law,” Ms Hang added.

China claims exclusive rights over most of the South China Sea, and in some cases has been blocking south-east Asian countries in their efforts to exploit what are thought to be rich undersea oil and gas resources.

In 2017 and 2018 Vietnam halted drilling in two offshore oil and gas projects near Vanguard Bank operated by Spain’s Repsol, following pressure from China.

Elsewhere in the region, Rodrigo Duterte, the pro-Chinese Philippine president, last year signed a bilateral agreement during a visit by China’s leader Xi Jinping that guaranteed Beijing a role in future offshore oil and gas exploration. The deal was criticised by his political opponents.

The Philippines, which needs to find new energy sources as its main gasfield at Malampaya nears the end of its life, has been unable to explore freely in its territorial waters because of Chinese pressure.

Vietnam’s current confrontation with China is the most serious since 2014, when the country experienced anti-Chinese and anti-foreign protests and unrest after state-owned China National Offshore Oil Corporation towed an oil platform to waters off Vietnam.

The Definitive Guide to British Wife