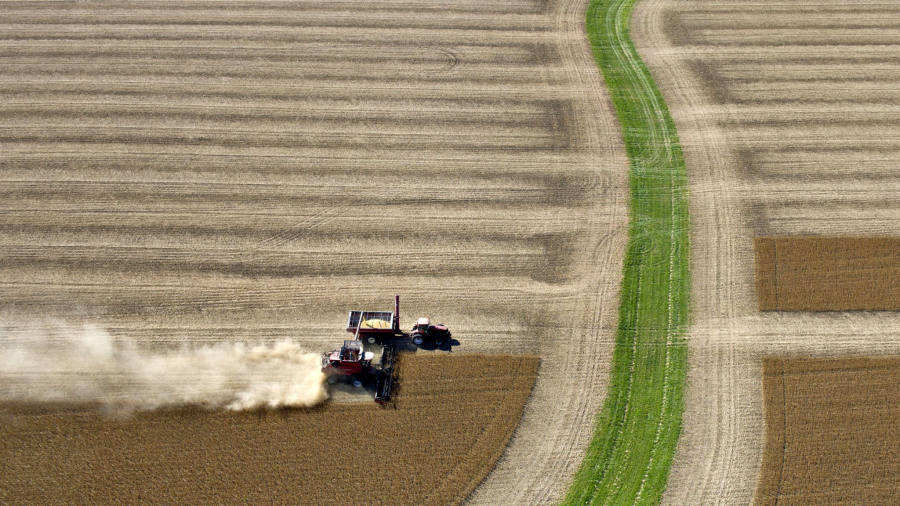 The Trump administration is close to unveiling a new aid package for farmers who are feeling the effects of the US-China trade spat, the US Department of Agriculture said Tuesday.

“Farmers should continue to make their planting and production decisions with the current market signals in mind, rather than some expectation of what a trade mitigation program might or might not look like, based on a media story,” a USDA spokesperson said, adding that details on the farm aid “will be forthcoming shortly”.

Bloomberg reported earlier Tuesday that the federal government was considering payments of about $2 per bushel to soyabean growers, in addition to 63 cents per bushel for wheat and 4 cents per bushel for corn, to compensate farmers for losses tied to a battle with China over trade. The package could exceed $15bn in total financial assistance, according to the report.

President Donald Trump said last week his administration was considering a plan to provide $15bn in aid to farmers, as he raised tariffs to 25 per cent on $200bn worth of Chinese imports.

Recognising farmers’ plight, the Trump administration last year authorised a $12bn bailout, including the Market Facilitation Program, which paid farmers based on their 2018 production. Most payments were linked to crops of soyabeans, the agricultural commodity worst hit by Chinese tariffs.

Analysts had warned that repeating higher payments for soyabeans in the latest aid package could increase planting this year, worsening a glut of the oilseed. But the USDA said the new program “is being designed to avoid skewing planting decisions one way or another”.

Soyabeans had already been looking more attractive as persistent rains soak Midwestern fields, leaving more than half of the US corn crop to be planted. As the corn planting window closes, farmers without seeds in the ground might shift some land to soyabeans, boosting production potential.

As of last week the USDA had disbursed $8.5bn to individual farmers and farm businesses under the Market Facilitation Program.

More than 3,000 farm businesses received a payment higher than the announced $125,000 cap per commodity category, the Financial Times reported this week. They were able to do so because they were structured as general partnerships, for which the cap applied to members and not the partnership as a whole.

Tensions between Washington and Beijing flared up this month as the world’s two most important economies exchanged a fresh round of tariffs. Mr Trump vowed to protect farmers from the impact of the trade battle, saying if China does not continue to buy US crops, the country will be “making up the difference” by purchasing farm products.