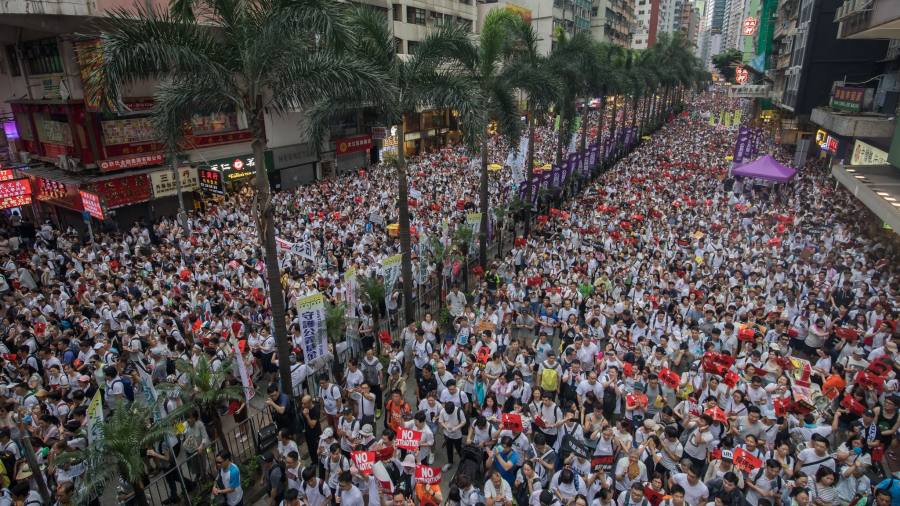 The US has expressed “grave concern” over a controversial Hong Kong extradition bill that would allow individuals to be sent to China to stand trial, saying the proposal puts the territory’s special status at risk.

In a statement following protests by hundreds of thousands of people in Hong Kong over the weekend, Morgan Ortagus, State Department spokeswoman, said on Monday that the US was concerned “the lack of procedural protections…could undermine Hong Kong’s autonomy and negatively impact the territory’s longstanding protections of human rights, fundamental freedoms and democratic values”.

Carrie Lam, Hong Kong’s leader, vowed to push ahead with a second reading of the bill on Wednesday, in the wake of one of the city’s biggest protests in 30 years, claiming the law was needed to plug a legal loophole. Organisers estimated 1m people took part in the demonstrations.

Hong Kong was guaranteed its civil liberties would be protected for 50 years after its handover from the UK to China in 1997 under the “one country, two systems” framework. The territory does not currently have an extradition agreement with mainland China.

The State Department said any amendments to the city’s laws regarding fugitive offenders should be made in consultation with local and international stakeholders. “The continued erosion of the ‘one country, two systems’ framework puts at risk Hong Kong’s long-established special status in international affairs,” Ms Ortagus said.

Hong Kong’s freedoms have come under increasing pressure since pro-democracy campaigners blocked streets for three months to demand universal suffrage in 2014. The territory’s government has since moved to disqualify pro-democracy legislators, imprisoned leaders of the 2014 Occupy Central movement, and banned a political party that called for independence from China.

“We are also concerned that the amendments could also damage Hong Kong’s business environment, and subject our citizens residing in or visiting Hong Kong to China’s capricious judicial system,” Ms Ortagus said.

Mark Field, UK minister of state for Asia and the Pacific, responded to a question from a Labour MP on the impact of the bill on the Sino-British Joint Declaration on Monday.

“We shall […] continue to stress to the Hong Kong and Chinese authorities that for confidence in the ‘One country, two systems’ to be maintained, Hong Kong must enjoy the full measure of the high degree of autonomy and rule of law as set out in both the Joint Declaration and enshrined in basic law,” he said.