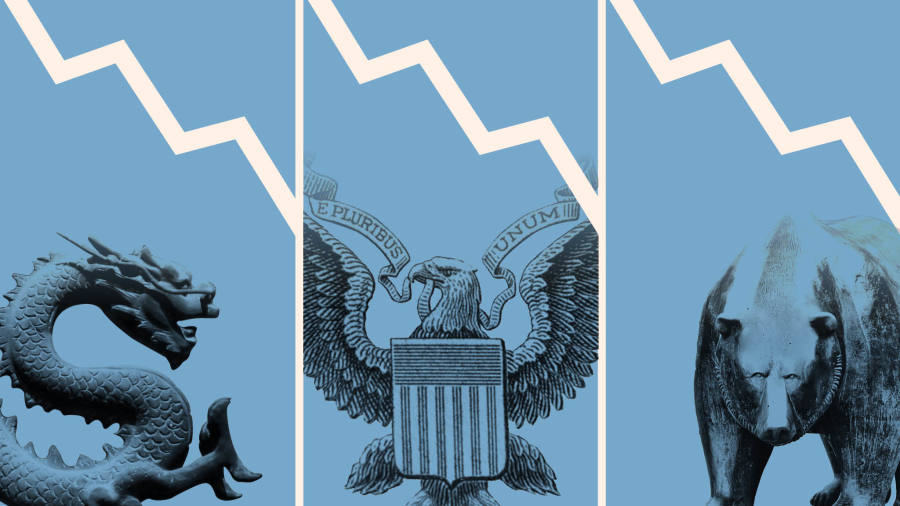 US and European equities rebounded on Thursday but were still heading for their biggest monthly decline of the year as concerns have mounted over a global slowdown in the face of an intensifying US-China dispute over trade.

The yield on the US 10-year Treasury note was down 1.9 basis points at 2.2168 per cent, having dropped sharply on Wednesday to their lowest level since September 2017. Bond yields fall as their prices rise.

Europe’s benchmark Stoxx 600 climbed 0.4 per cent on the penultimate day of the month from its lowest close since March 25. The index has fallen nearly 5 per cent in May, heading for its worst month this year. London’s FTSE 100 was down 0.5 per cent, easing off its lowest level since May 13.

Conflicts over trade and technology between the US and China have shown no signs of abating while expectations of slowing growth in the world’s biggest economies have mounted. Brazil’s economy meanwhile contracted for the first time in more than two years.

Volumes were thin on Thursday in many European markets as some countries, such as France and Germany, observed a public holiday for Ascension day. About 1.1bn shares had been traded in early afternoon compared with 1.6bn as the average daily volume over the past 30 days at the same time, Bloomberg data showed. German and French markets were open though, with the Dax and CAC40 indices up 0.5 per cent apiece.

Italy plans to sell as much as €6bn of medium-term sovereign debt on Thursday. “The auction is rather small, which should limit pressure in the current market environment, which is dominated by spread volatility,” said analysts from UniCredit.

The price of Brent crude extended its decline with a 4.5 per cent fall to $66.51, as the international oil benchmark headed for a 8.2 per cent drop in May.

Most major indices in Asia retreated, with the Topix in Japan closing down 0.3 per cent and the S&P/ASX 200 in Australia dipping 0.8 per cent. Among China-focused bourses, the CSI 300 fell 0.6 per cent while Hong Kong’s Hang Seng dropped 0.4 per cent. The Kospi in South Korea was the sole bright spot, rising 0.8 per cent.