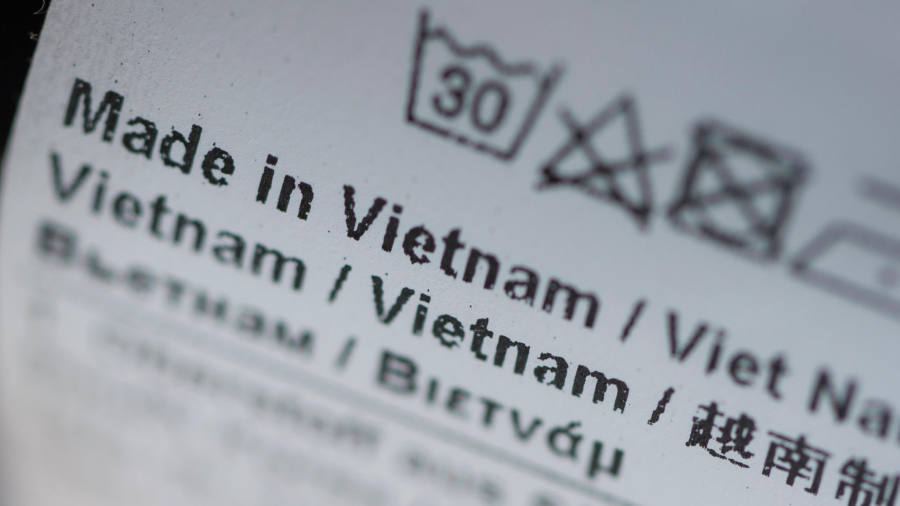 Vietnam has vowed to crack down on companies that have been relabelling Chinese goods as Vietnamese to avoid US tariffs, in a move that underscores the south-east Asian country’s growing role as a regional export hub in the intensifying US-Chinese trade war.

Vietnam’s customs department said that it had ordered provincial and municipal customs departments to step up their inspection and verification of certificates of origin to root out fraudulent ones. In a statement posted to its website on Sunday, the body said that companies were importing goods from China, then removing or replacing the packaging on goods to describe them as “Made in Vietnam”.

State-controlled media quoted Hoang Thi Thuy, head of the agency’s customs control and supervision department, as saying that authorities had identified “dozens of cases” where this happened.

In one, dating back to 2017, before US President Donald Trump began his trade offensive against Beijing, the customs department in the northern port of Haiphong found a company that had imported speakers and phone chargers from China that had “Made in Vietnam” printed on their packaging.

Vietnamese customs officials said that the trans-shipment of goods under forged certificates of origin was happening most often in the areas of textiles, seafood, agricultural products, ceramic tiles, honey, iron steel, aluminium and pressed wood.

News of the relabelling of Chinese goods will add to growing scrutiny of Vietnam’s role as a winner in the US-China trade war, as more Chinese, US and other companies step up purchasing or manufacturing in Vietnam to avoid rising US tariffs on a swath of Chinese goods.

Nomura, in a research note published last week, found that Vietnam was “by far the largest beneficiary” of import substitution as buyers around the globe shifted their buying from China.

Imports to the US from Vietnam grew by 40 per cent in the first quarter of this year, about double the rate of imports from South Korea and Taiwan, and one of the fastest growth rates for any economy.

The US is now Vietnam’s largest export market, and its trade surplus with the US reached $39.5bn last year.

Vietnam has drawn closer to the US in recent years because of their shared suspicion of China’s growing regional ambitions. It hosted Mr Trump at February’s nuclear summit with North Korea’s Kim Jong Un in Hanoi.

Last month Vietnam escaped being designated by the US Treasury as a currency manipulator.

However, trade tensions have simmered for years, including in a long-running dispute over catfish. Last week, Darin LaHood, a US state representative from Illinois, called for an investigation of Minh Phu Seafood, Vietnam’s biggest shrimp producer, accusing it of evading antidumping duties on Indian frozen shrimp by importing it, minimally processing it, then selling it through its US subsidiary Mseafood as Vietnamese product.

The Vietnamese company has denied any wrongdoing, and said it believed any potential US investigation would exonerate it.

The Office of the US trade representative declined to comment.