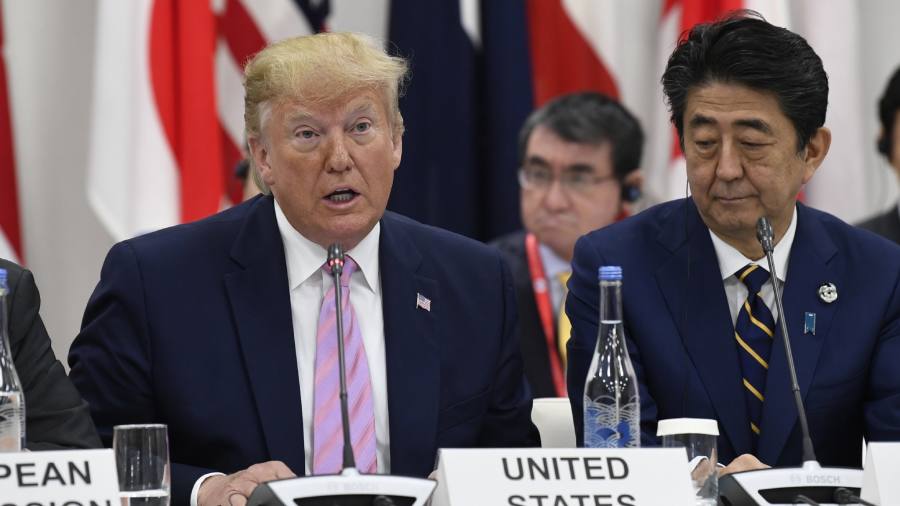 A high-stakes meeting between the presidents of the US and China will set the tone for markets heading into the new week, as the world’s two most important economies seek a resolution to a long-running trade dispute.

Also on tap in the US, investors await data on the labour market and manufacturing sector in a holiday-shortened week. Elsewhere, Opec members will meet to iron out oil production plans.

Here’s what to watch.

Economic data and the Fed

A fresh round of key US economic data due next week will probably factor into the Federal Reserve’s decision on interest rates in late July.

At the top of the list is the labour department’s monthly jobs report. Economists polled by Thomson Reuters anticipate an increase of 158,000 non-farm payrolls in June, which would reflect an uptick in hiring compared to the 75,000 jobs added in the prior month. The unemployment rate is expected to remain at a near 50-year low of 3.6 per cent.

Investors will also be able to parse the latest surveys from the Institute for Supply Management on the US manufacturing and services sectors, as well as reports on auto sales, factory orders and the nation’s trade balance.

The Fed’s policy-setting committee will reconvene on July 30-31, and investors expect the central bank to lower its target rate for the first time since the 2008 financial crisis amid soft inflation and uncertainty over global trade. The market has priced in a 100 per cent chance of a rate cut, with 30.2 per cent odds that officials will approve a cut of 50 basis points, according to CME Group’s FedWatch Tool which monitors Fed funds futures.

US stock and bond markets will be closed in the US for Independence Day on July 4, and they will close early on July 3.

The Organization of the Petroleum Exporting Countries will meet in Vienna beginning July 1 to set policies on the group’s oil output for the remainder of 2019.

Opec and its allies moved to cut production in December, hoping to boost prices. A recent report from the International Energy Agency noted the supply curbs have been overshadowed by US-led production growth outside Opec. US production of crude hit a record 11m barrels a day in 2018 and is on pace to hit 12.4m b/d this year, the Energy Information Administration has forecast.

Brent crude, the international oil marker, has risen about 24 per cent year-to-date but remains below its 2018 closing high of $86.29 a barrel.

President Donald Trump and President Xi Jinping’s planned meeting over the weekend on the sidelines of the G20 summit in Japan could decide the direction of market sentiment.

Mr Trump and Mr Jinping are not expected to hammer out a deal, though investors have been hopeful that the two sides can restart talks and avoid further escalation of the trade spat.

“By keeping the hope of a deal alive, even a temporary ceasefire would be a positive in the near-term, limiting the downside risks to the economy. But we’ve been here before, and the prospects for a lasting deal appear slimmer than they did following the truce at the Buenos Aires G-20 summit in November,” said Michael Pearce, senior US economist at Capital Economics.

Mr Trump has threatened to add tariffs to $300bn worth of Chinese goods following the G20 meeting. In May, the US and China raised tariffs as negotiations stalled.

Wimbledon, the third of four major championships in tennis, begins on July 1 in London. Novak Djokovic is the top seed on the men’s side. The women’s No. 1 seed is Australian Ash Barty, who won the French Open in early June.

Also in sports, the Fifa Women’s World Cup continues next week. The final is scheduled for July 7.