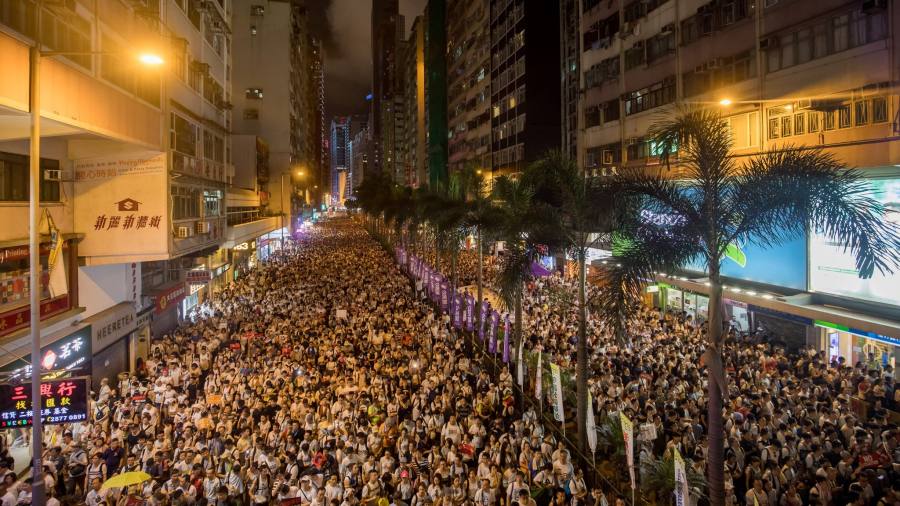 Hundreds of thousands have taken to the streets in what appear the biggest protests since the handover of Hong Kong to China in 1997. With good reason. Since the smaller, pro-democracy Occupy demonstrations in 2014, the government has progressively undermined the freedoms supposedly guaranteed in Hong Kong’s basic law, or mini-constitution. The extradition bill proposed by the city’s chief executive challenges the rule of law and independence of the judiciary — and with it the very essence of “One Country, Two Systems”, the principle allowing Hong Kong to maintain its own economic and administrative system.

Until five years ago, that formula was largely honoured. But the Occupy protests rattled the Chinese authorities. Leaders have since been imprisoned. Free speech has been eroded. Many bookshops and media outlets have been bought up by owners friendly to Beijing. Legislative procedures have been changed and elected legislators barred from office through vague tests of “loyalty” to the central government.

Yet Hong Kong’s citizens still enjoyed the protections of a separate judicial system bequeathed from its days as a British colony, with an independent judiciary and separation of powers guaranteed under the basic law.

The proposed extradition law would allow the Chinese government to extradite people it accuses of serious crimes from Hong Kong to the mainland. That opens a doorway for the Chinese justice system — where there is no separation of powers and law courts are subservient to the Communist party — to extend its reach into Hong Kong. It could be used to spirit away anyone from political activists and dissidents to critics of Beijing’s economic policies or those involved in business disputes. It would in effect legalise incidents similar to the 2015 abduction of five Hong Kong booksellers to the mainland for selling politically sensitive books.

This strikes at the heart of what separates Hong Kong from mainland China — which explains why so many people are now protesting. The proposed law is also a serious risk to Hong Kong’s investment attractiveness and asset values. Many companies have headquarters in the city because of the promise of robust legal protections.

Supporters suggest that Carrie Lam, Hong Kong’s chief executive, may have proposed the law to fend off increasing pressure from Beijing for actions to implement Article 23 of Hong Kong’s basic law, which seeks to bar treason and subversive activities against the central government. An Article 23 bill in 2003 brought half a million people on to the streets in the largest postcolonial protests before this week’s.

The Hong Kong administration U-turned then. It is unlikely to do so now. China has become more overtly authoritarian since Xi Jinping became president in 2012. Diluting Hong Kong’s special status hammers a final nail in the coffin of the idea two decades ago that “One Country, Two Systems” might become a basis for peaceful unification with Taiwan. But concessions by Beijing to Hong Kong over this bill could be seen as weakness and risk demands for similar special treatment from other parts of China.

President Donald Trump’s widening trade war with China has reduced US moral leverage. Western democracies, however, should be making their voices heard. Though convulsed by Brexit and finding a new prime minister, the UK — with whom Beijing negotiated Hong Kong’s status — should be leading calls for a robust EU message. Unless it stands up for democracy and the law, in the clash of systems with Beijing, the west will have little in the way of alternatives to offer the Chinese people.

Is Tinder too fearful? Try Clover, the speediest, most careless dating app yet