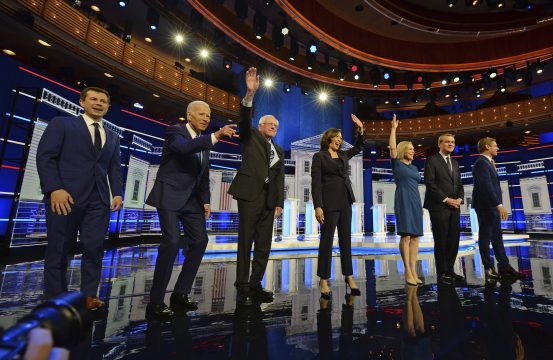 Last week, 20 U.S. presidential hopefuls in the Democratic Party took to the debate stage in a bid to win support in what is likely to be a long campaign season. While Americans rarely make their presidential picks based on foreign policy, how presidential candidates think about U.S. ties to international partners is becoming increasingly intertwined with domestic policies, especially on the economic front.

The first two Democratic debates were held amid tense economic posturing by Washington and Beijing over trade. While further escalation appears to have been temporarily put on the back burner after a Trump-Xi meeting on the sidelines of the 2019 G-20, managing the U.S.-China relationship should remain a top priority for any U.S. president — and not only because the two countries account for nearly 40 percent of the world’s GDP. Yet Democratic presidential candidates have so far been relatively tightlipped and narrow in their assessments of China and how the relationship to Beijing fits into their vision of the United States.

Prior to the debate, the trade war between Washington and Beijing revealed some cleavages among the Democratic contenders. Some support tougher trade measures against China and others oppose the consequences for American consumers. One might have expected more discussion on China in the four hours of debate that took place, but by and large, China was only briefly mentioned.

So what did we learn from the debates about where Democratic candidates stand on China? Four candidates named China as the greatest threat to the United States: Julian Castro, former secretary of housing and urban development; John Delaney, former Maryland congressman; Minnesota Senator Amy Klobuchar; and Tim Ryan, an Ohio congressional representative.

China was also raised a handful of other times. Colorado Senator Michael Bennet and former tech executive Andrew Yang spoke briefly about China but largely in the context of the economic challenge it poses in terms of its trade policies around the world. Separately, former Colorado Governor John Hickenlooper also acknowledged China’s sub-par record on intellectual property rights but advocated greater cooperation to better address global pandemics and other transnational crises.

South Bend Indiana Mayor Pete Buttigieg offered the most nuanced and analytical response on China, framing the bilateral relationship outside of strict trade terms and instead contrasting the countries’ political models. He noted that China’s “authoritarian model is being held up as an alternative to ours because ours looks so chaotic compared to theirs right now because of our internal divisions.” Under those circumstances, Buttigieg argued, “The biggest thing we’ve got to do is invest in our own domestic competitiveness.” His comments echoed his foreign policy speech a few weeks earlier in which he said cooperation with China was possible in areas of mutual interest, but that the United States must rise to meet the “China challenge,” which he cast an alternative political model that champions “the international expansion of authoritarian capitalism.”

Debates themselves are rarely opportunities for candidates to lay out detailed ideas because of the format and time constraints. However, beyond the debates, the candidates’ websites and speeches to date do not offer much more insight into how they would answer the “China question.” Many have yet to outline a clear position on China. For those that have been a bit more direct, they have taken a more uncompromising position against China, where chastising China’s trade policies is a recurring theme.

Former Vice President Joe Biden has been criticized for taking a more conciliatory approach to China, even downplaying the degree of competition between Beijing and Washington. However, he has adopted a tougher tone of late, emphasizing that China is in fact a serious challenge. Vermont Senator Bernie Sanders emphasized fostering cooperation with countries like China to tackle denuclearization on the Korean Peninsula and climate change in a 2017 foreign policy speech. More recently, though, he has promoted his vision of democratic socialism in the United States, particularly in contrast to what seems to be a resurgence of authoritarianism around the world. Separately, New Jersey Senator Cory Booker has criticized both Chinese trade practices and its role in environmental damage. Massachusetts Senator Elizabeth Warren wrote in Foreign Affairs that “[China is] using its economic might to bludgeon its way onto the world stage and offering a model in which economic gains legitimize oppression.” How these critiques would translate into tangible policies remains somewhat ambiguous.

The U.S.-China relationship can hardly be reduced to one defined solely by trade and economic interests. While U.S. voters and politicians alike seem to be hardening their view of China, it is not sufficient for presidential hopefuls to identify points of contention in the bilateral relationship. Perhaps, as the field thins, more concrete blueprints for the future of U.S.-China relationship will emerge.