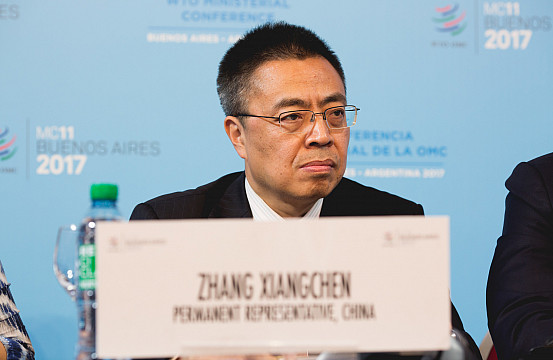 As the world debates the prospect of a China-U.S. trade agreement, yet another debate is taking Chinese strategic circles by storm: World Trade Organization (WTO) reforms.

It is argued that the ongoing trade negotiations between the United States and China, U.S.-Japan, U.S.-EU and the already concluded new NAFTA or USMCA between the U.S., Mexico and Canada, are really only the “prologue” to the ultimate “big show” – reform of the WTO, which will set the rules of the game in global trade and investment for the next quarter of a century or so. As per the Chinese narrative, the “game” surrounding WTO reforms has already begun and it is just a matter of time before the formal negotiations begin, likely following the successful completion of the separate negotiations in the various ongoing trade spats. In fact, the trade negotiations, many Chinese scholars argue, will further pave the way for WTO reforms by securing broad-based consensus among related stakeholders on matters of concern.

China’s official discourse is that China will support “real reforms” at the WTO but will stay away if it is “trap.” “If someone wishes, in the name of reform, to put China in a tailor-made straitjacket of trade rules to constrain China’s development… they will be very much disappointed,” stated China’s ambassador to the WTO, Zhang Xiangchen, at a WTO conference in Paris in November 2018.

Further explaining China’s concerns, Long Guoqiang, deputy director of the Development Research Center of the State Council, argues that the United States regards the WTO as a new platform for great power rivalry. According to Long, the United States accuses China of bad behavior using the theory of “three noes”: That China is a non-market economy country, China’s economic system is incompatible with the WTO, and China is no longer a developing country and therefore not entitled to enjoy special and differential treatment at the WTO. “If the WTO is used as a battlefield against China, it will put reform into a dead end,” Long infers.

Echoing similar sentiments, a recent publication from the School of Economics at the Beijing University highlights that after negotiations with the United States and the European Union, Beijing has realized the importance of further deepening reforms and expanding openness, and is wholeheartedly working in that direction. But that does not mean that China will give up its identity as a developing country and blindly pursue the “three zero trade” (zero tariffs, zero market barriers, zero subsidies), which is “not only unfair to China, but also unfair to developing countries.”

Interestingly, there are authoritative voices in China who do not subscribe to this viewpoint and are publicly lobbying for China not to fight it out with the United States over global governance at the WTO. Rather, they argue that China should seek to strengthen its commonality with the developed world.

Pang Zhongying, dean of the Institute of Marine Development at the Ocean University of China and Distinguished Professor at Macao University of Science and Technology, observes that in the ongoing trade negotiations between the United States and China, the Trump administration has made China “sit on the same level” with the U.S., rather than making it a negotiation between the world’s “largest developed country” and the “largest developing country.”

The United States, he adds, has also been particularly successful in lobbying for concerted action against China at the WTO. For instance, the EU, which is another most critical factor in the world trading system, no longer recognizes China as a developing country; its recent reports have instead deemed China an “economic opponent.” Then there is Tokyo, which has not only urged Beijing to give up its developing country tag but has also called on the Asian Development Bank to reduce the provision of low-interest loans to China. Moreover, the new World Bank president, David Malpass, has also expressed similar sentiment and has indicated “a quick decrease in lending to China,” given its robust capital markets.

In addition, the United States, Pang notes, is also rallying some developing economies like Brazil on this issue. The March 19 joint statement between Trump and Brazilian President Jair Bolsonaro is of particular interest in this regard — Brazil agreed to forgo its rights of special and differential treatment in World Trade Organization negotiations, in return for Washington’s support for its accession in the Organization for Economic Cooperation and Development (OECD) as a full member.

Given the circumstances, Pang argues:

China cannot and should not stick to the status of an early developing country and keep pressing for differential treatment at the WTO. China needs positive and constructive coordination with the United States, the European Union, and Brazil on WTO reforms. Positioning itself with India and other representatives of the developing world and demanding the continuation of the old differential treatment principle of the WTO is not in line with China’s fundamental foreign policy of more active participation in global governance.

The perspective is seconded by Jia Qingguo, member of the Foreign Affairs Committee of the Chinese People’s Political Consultative Conference National Committee, a member of the Standing Committee of the China Democratic League, and a professor at the School of International Relations of Peking University. Jia believes that it is high time for China to appropriately deal with the inherent contradictions in its identity and interest. “In the coming days [China] has to take a stand on if it is a developing country or a developed country, a poor country or a rich country, a strong country or a weak country, an ordinary country or a superpower. It needs to determine if it is a free rider or a driver, if it is like or unlike the United States,” he argues in a recent piece in Caixin.

Jia suggests that in the present geopolitical landscape China should not highlight too much of its uniqueness or heterogeneity from the developed world, particularly the United States. Since identity determines interests and interests determine foreign policy decisions, China’s identity as “the other” can “endanger its existence” no matter how strong and powerful it is. On the other hand, if China can be seen by the United States and others as a “similar country,” its rise will be better accepted and appreciated.

The principle will be beneficial for China to gain a competitive advantage in the new competitive global economic landscape. If China implements zero tariffs on manufacturing, agriculture, energy and minerals, consumer goods, and other fields, the advantages will outweigh the disadvantages; if it implements zero barriers, China’s business environment will greatly improve and it will help Chinese enterprises to go out. The implementation of zero subsidies will be conducive to structural adjustment, force state-owned enterprise reforms, prevent rent-seeking behavior, and reduce trade friction.

“If China can do the three zeros, it will be equal to a second accession to the WTO,” Huang adds.

It is against this backdrop that, on May 13, China officially submitted its WTO reform proposal, where it criticized U.S. policies for causing an “existential threat” to the organization and defended its rights as a developing member to enjoy special and differential treatment. Interestingly, Chinese media interpreted the reform document as a part of China’s “progressive statements” and “multiple positions” on the issue.  In a suggestive note, Tu Xinquan, a professor at the China Institute for WTO Studies, University of International Business and Economics mentioned, “This might not be China’s final plan of action; there might be other plans as well.”

Indeed, both the developed and the developing world will keep a close eye on China’s next move on this issue.

Antara Ghosal Singh is presently working as a Research Associate at the Delhi Policy Group (DPG). She is an alumna of Tsinghua University and Beijing Language and Culture University, China and National Central University, Taiwan. Before joining academic research, she worked as a journalist.