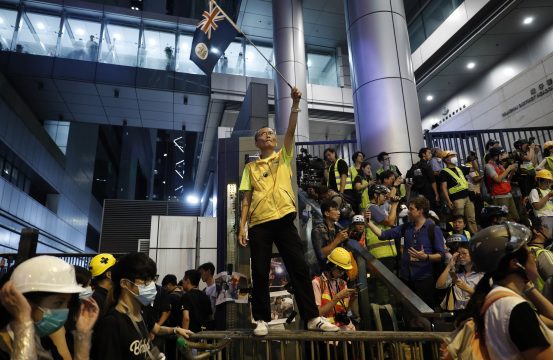 Over the last month in Hong Kong, a proposed legislative amendment to allow the surrender of fugitive offenders to mainland China has sparked peaceful protests, violent clashes between protesters and the police, a second peaceful million-person march, and an unprecedented day-long siege of police headquarters.

When the dust settles – if it does settle – where does this leave Hong Kong?

Most analysis of Hong Kong starts by asking if “one country, two systems” is working or not. This is a reference to the principle underlying Hong Kong’s return from Britain to Chinese sovereignty in 1997, but with a “high degree of autonomy” and the retention of its previous “capitalist system and way of life.”

If a main objective of this was to ensure Hong Kong did not become “just another Chinese city,” then it is worth noting that not many of recent events would have happened elsewhere in China. Hong Kong people have again expressed their views en masse, including on the brutal suppression of the student and worker movement in Beijing 30 years ago. Local and foreign journalists reported freely, with online platforms at the forefront of the rapid spread of information and live footage of events in the city.

Whatever happens next, street protests will remain a central feature of Hong Kong politics, not least because of the constant vigilance of those who are concerned that Hong Kong’s freedoms are under threat. The right to protest peacefully was again affirmed by Hong Kong’s highest court (the Court of Final Appeal) last year, though the court also upheld the principle that violence should be punished firmly. This will be probably be one of the battlegrounds of public debate and legal proceedings as Hong Kong digests the implications of June’s events, though some have called for amnesties instead.

But simply being different from other parts of China does not indicate that Hong Kong has much to celebrate at the 22nd anniversary of the handover on July 1.

Politics returned to the streets with a vengeance largely because of the failure of the city’s political institutions to deal with the government’s proposals on extradition. The government’s handling has been roundly criticized, as has the advice given – or not given – to the chief executive by her body of senior advisers, the Executive Council.

It is also worth noting that in May, the legislature had been unable to form a bills committee to examine the issue, with legislators literally fighting over the microphone. Opposition politicians felt the government was not prepared to listen to their views, while the government argued that they were not accurately understood. This was a dialogue of the deaf.

Similarly, five years ago, the 79-day “Umbrella” or “Occupy” Movement led not to thoughtful consideration of how to reconcile differences over ways to enhance democracy in Hong Kong, but to a polarization and hardening of positions. The outcome was political stalemate and a rejection in June 2015 by the legislature of the government’s proposals on political reform.

The more democratic political system which many hoped might have emerged instead could well help deal with this paralysis, and some in Hong Kong have already renewed their calls for political reform in the wake of recent events. But progress on this front requires agreement between the central government in Beijing, the Hong Kong government, the legislature, and – in effect – consent from the people. In other words, it needs compromise. In the current political environment it is hard to see who will engineer this, and how.

These are primarily problems of politics and governance within Hong Kong, though their causes are not all local. Understanding them requires going beyond the one-dimensional question of whether Beijing is attempting to “tighten its grip.”

For many decades, Hong Kong has been at the forefront of globalization and the ways in which China’s economic rise has been part of this. The spillover of these trends into Hong Kong has provided new business opportunities, but also been a dislocating factor for the city.

Other political challenges in Hong Kong are at least in part a consequence of the outbreak of global financial crisis a decade ago. It is no coincidence that since then local politics has come to bear a striking resemblance to that in other developed economies. Society has become more polarized and fragmented, socioeconomic divides have grown, elites have become out of touch with their populations, and politicians have looked elsewhere for scapegoats.

Hong Kong’s story is therefore not just about its relationship with its post-1997 sovereign power. It is a story of a global city, with all the challenges that brings in the early 21st century.

There are plenty of people in Hong Kong who will tell you what they do not want to see in the future, whether independence on the one hand or assimilation into China’s politics on the other. What is missing are positive visions. The first step to developing these must be to rediscover the ability to discuss, debate, and build compromise in a rational and sensitive manner.

Tim Summers is a Senior Fellow on the Asia-Pacific program at Chatham House (based in Hong Kong). His new book – China’s Hong Kong: The Politics of a Global City – will be published by Agenda Publishing in July 2019.