Classical music lovers would be hard put to think of a more romantic evening than one spent listening to Rachmaninoff’s Symphony no. 2 played by one of the world’s finest orchestras on an early autumn night. On Sept 22, London Symphony Orchestra (LSO) performed this emotional piece with music director Simon Rattle to celebrate the 30th anniversary of Hong Kong Cultural Centre.

With a 115-year history, LSO is the oldest and most popular orchestra in the UK and well-known to Hong Kong audiences. During its ninth visit to the city, LSO not only displayed its exceptional ability to interpret the symphonies of Rachmaninoff and Brahms, it also showed its willingness to highlight new music talents. Local pianists, Colleen Lee and Aristo Sham, were invited to play two challenging piano concertos written by Rachmaninoff and his fellow composer from Russia, Prokofiev, as soloists.

LSO’s three Hong Kong concerts could be described as conservative. No contemporary music pieces were included. Orchestras often seek to attract maximum attention during overseas tours, which could leave some, especially those who support LSO’s belief in promoting the works of emerging composers, feeling a little disappointed. However the orchestra and Rattle struck a fine balance by collaborating with the two emerging pianists. Lee’s and Sham’s performances were both impressive and inspiring, increasing confidence in Hong Kong musicians.

The program opened with Haydn’s Symphony no. 86. With a standard classical four-movement form, the piece is one of the six Paris symphonies written by the Austrian composer. To conform to the original style of the 18th century piece, the orchestra arranged its wind players to perform standing. Rattle stood among the musicians, conducting with deft and elegant gestures.

LSO’s expertise in interpreting Romantic works was in evidence in the second half. Of the five piano concertos written by the Russian composer, the third has garnered the greatest popularity and critical acclaim due to its eyebrow-raising techniques and the intricate balance between the solo and orchestral parts.

Colleen Lee, a prize winner at the 15th International Chopin Piano Competition in 2005, had a vivid dialogue with the orchestra, both in the fervent as well as sophisticated and tricky pieces. Although the slender pianist experienced difficulties in several phrases filled with power and thrilling sparks, her rendition sounded completely in sync with the orchestra. After the breathtaking third movement, the performance of both Lee and the LSO elicited a rousing ovation. What impressed me most was that the pianist, after taming Prokofiev’s “monster”, played Tchaikovsky’s piano piece October in a restrained and poetic manner. The contrast between hard and soft as well as strong and fragile was striking.

Rachmaninoff’s Symphony no. 2 in the second half was a good opportunity for LSO’s wind section – especially the clarinetist who played a striking solo in the third movement – to showcase their narrative skills and emotional expression. A master of 19th-century music, Rattle showed his skill in leading the orchestra in an expressive but not overdramatic manner. His thoughtful interpretation of the third movement combined with the poetic melody played on the violins as well as the timbre of a rich and thick brass was mesmerizing. 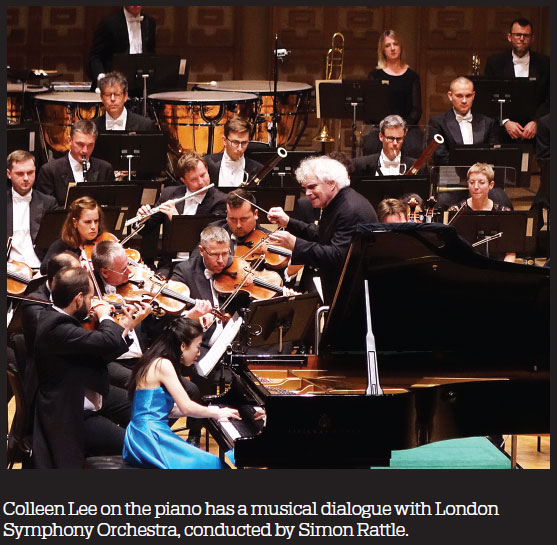 Nomura/Hong Kong: beyond our Ken

Nio: back to the future

Nomura/Hong Kong: beyond our Ken

Nio: back to the future