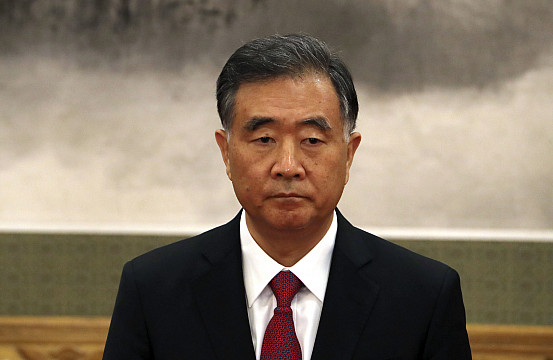 When Chinese Communist Party (CCP) leader Wang Yang made unusually candid remarks at the Cross-Strait Media Summit in early May, the text of his remarks was almost immediately taken down. What had Wang – an authoritative spokesman on Taiwan policy – said? Why were his remarks suppressed?

The Fourth Cross-Strait Media Summit was held in Beijing on May 10.  The conference was formally co-hosted by the Beijing Media Association, acting on behalf of the CCP Propaganda Department, and the WantWant China Times Media group from Taiwan. It brought together about 70 mainly pro-China media representatives from Taiwan and their mainland counterparts. The theme of the conference was the media’s responsibility in cross-strait exchanges. The Party’s purpose in convening these media summits is to cultivate people in Taiwan’s media world who will cooperate in spreading the CCP’s message in Taiwan.

At the end of the meeting, Politburo Standing Committee member Wang Yang, the chairman of the Chinese People’s Political Consultative Conference, the highest level CCP United Front organization, addressed the participants. His remarks were remarkably candid and down-to-earth. Surprisingly, the published text of his remarks and the video of his presentation were almost immediately removed from official media websites. In their place, Xinhua released a brief report. That report ended by stating that the “media on both sides must jointly play the role of communicating to the people on both sides of the strait by promoting Chinese culture, deepening the integration of emotions, and continuing to promote the process of peaceful reunification of the motherland and strive to realize the China dream.” This is typically bureaucratic language that Wang actually does not voice on the video.

The original CCTV video, as seen and recorded in Taiwan, showed Wang addressing the delegates from behind two microphones, without a podium or notes. He spoke for about eight minutes in a casual, down-to-earth style – a style that would seem appropriate for an off-the-record talk.

Substantively, Wang began by very briefly summarizing a few key points from CCP General Secretary Xi Jinping’s January 2 address on the anniversary of the 1979 Message to Taiwan Compatriots. Wang said Xi’s address showed that in achieving the peaceful reunification of the motherland, the mainland has both “time and trends” on its side. In saying this, Wang clarified, “he was not thinking that the mainland is now strong economically, militarily, and technologically, but rather that we have complete confidence in our theory, structure, and civilization.”

Wang went on to compare China and Taiwan. Mentioning the CCP’s goals for the two 100-year anniversaries in 2021 and 2049, he said those goals show that China is implementing long-term plans. He then belittled Taiwan, saying, “When we think of the authorities in Taiwan, they can’t even guarantee what will happen in the next two years.” This demonstrates why the mainland has “time and trends” on our side, Wang asserted.

Wang then moved to accusing Taiwan independence forces of hoping to rely upon the United States and mentioned the Taiwan Assurance Act, recently passed by the U.S. House of Representatives. He asked rhetorically, “Do you think the Americans can provide assurance?” Wang answered himself: “The Americans just treat Taiwan as a pawn. Will America go to war with China over the Taiwan issue? My judgment is no. And if they fight, will they win? I judge they cannot.” Wang mentioned that the American-led UN forces did not defeat the (Chinese) Volunteer Army on Korean War battlefields. At that time, China was still impoverished. “Facing today’s China, would America dare to go to war with China?” It is rare for CCP officials to speak so candidly about the military factors in the context of unification.

At the beginning of his remarks, Wang had said that his attending the meeting along with Propaganda Department Head Huang Kunming reflected the importance that the Party places on the role of the media. He ended by saying that to achieve peaceful unification and carry out “one country, two systems,” the Party still depends on our friends in the media. Wang acknowledged that promoting unification within Taiwan was not easy, but assured Taiwanese participants that their efforts would be remembered by history when reunification is achieved.

So why were these remarks by Wang taken down so promptly? Sometimes, the removal of photo or report about a leader indicates the person is in trouble. There is no indication this is the case here. It may be that Wang never expected his remarks to be reported verbatim, and the mistake was that the video and text had been released in the first place. Just why they were removed, or were mistakenly released, is known only to those who made the decision. The reason is possibly that his comments on military factors and speculation about war were deemed inappropriate for publication. His emphasis on military factors is inconsistent with the CCP’s emphasis on peaceful unification.

It is also possible that Wang was too straightforward in explaining how the Party hopes to accomplish unification peacefully. While the Party’s game plan for unification is buttressed by this hard power, it is built around two psychological elements, which Wang discussed: first, undermining the Taiwan people’s confidence in their government and democratic system and, second, undermining Taiwan’s confidence in the United States as a reliable supporter capable of coming to Taiwan’s assistance in the face of growing PLA capabilities. This game plan represents a challenge for the United States. The Party may misjudge U.S. resolve, but creating uncertainty about American support is an important tactic. While not a new perspective, publicly highlighting the role of Taiwan’s pro-Beijing media in undermining public confidence in Taiwan may have been seen as counterproductive.

Wang’s comments on the military aspects of unification are also noteworthy for another reason. Wang did not speak about the mainland using force. He was describing how latent PLA capabilities would constrain and influence both U.S. actions and Taiwanese perceptions. Those who focus on PLA attack scenarios are missing this more important perspective. A host of factors will continue to constrain Beijing from actually using force. But then, Chinese strategic thinking dating back to Sun Tzu places the highest value on achieving objectives without having to use force. The key is using military power for influence. How both Beijing and Washington develop their military capabilities and deploy those capabilities to achieve political and psychological influence will have an important effect on how people and leaders in Taiwan view their options in the future.

Wang Yang is an authoritative spokesman. On cross-strait policy issues, he is second only to Xi Jinping. His remarks are more than just a pep talk for this audience or suggestions of current propaganda themes for the media. They tell a lot about how the Party leadership hopes to accomplish unification peacefully.