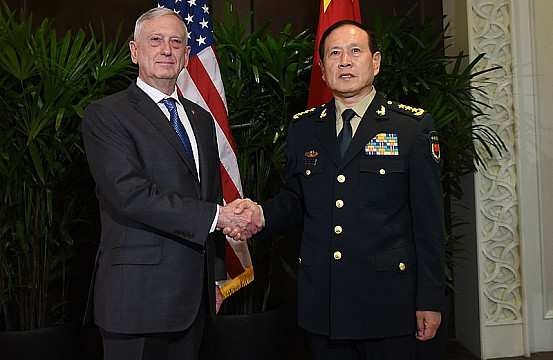 General and State Councilor Wei Fenghe, China’s minister of national defense, is set to deliver a speech as his country’s representative at the Shangri-La Dialogue (SLD) from May 31 to June 2 in Singapore. The annual gathering is dedicated to bringing together defense ministers and military officials from various Asia-Pacific countries, as well as scholars and members of the media, to promote exchanges on the region’s pressing security matters and foster interstate relationships. Wei, whose speech will be given on the final day of the forum, is the highest ranking Chinese delegate to attend since 2011.

It should surprise no one that the central phenomenon shaping all items on the 2019 Shangri-La Dialogue’s agenda is the seeming entrenchment of Sino-American rivalry. Asia’s defense policymakers will descend upon the city-state of Singapore amid new and recurrent tensions in the bilateral relationship between Beijing and Washington. Singaporean Prime Minister Lee Hsien Loong’s keynote address will address competition between Washington and Beijing and its impact on the Asia-Pacific, as well as the role that smaller states can play to boost regional security and world order.

Unresolved bilateral trade talks between the United States and China have generated a higher degree of uncertainty for Asia’s other regional players, and not only on the economic front. China has been actively investing in the modernization and restructuring of its military and has grown more assertive, particularly in regard to its rhetoric and posturing vis-a-vis its territorial claims in the East and South China Seas and Taiwan. Land reclamation and infrastructure development on features in contested waters has heightened anxieties among China’s neighbors. While few are willing to directly confront Beijing for fear of jeopardizing their important economic ties to China, the United States has conducted freedom of navigation operations (FONOPS) over the years to contest what Washington sees as overly extensive maritime claims (by China and many other nations). Most recently, the Trump administration carried out two FONOPs in the South China Sea during the month of May, a deviation from the more routine operations that have been conducted every two months or so.

Despite the power jockeying that can characterize regional dynamics, the Asia-Pacific is also challenged by transnational issues such as climate change, piracy, maritime disaster relief and preparedness, and terrorism. These issues may benefit from more multilateral approaches, or at least some international dialogue, even if informal in nature. However, China’s enthusiasm for participation in more Western- or U.S.-led fora — typically symbolized by the seniority, experience, and importance of the delegate sent to represent China — has seemingly been on the decline. For example, China has sent its defense minister to the SLD only once before, in 2011. Since then, China appears to have downgraded its degree of participation at the SLD, perhaps in favor of alternative security dialogues that may be organized more to China’s liking, such as the track II Xiangshan Forum held in Beijing.

So why the reversal to upgrade China’s presence at the SLD now? The gathering provides a platform for Wei to trumpet Chinese contributions to regional security, not to mention the Belt and Road Initiative, and to take questions from the audience about how China envisions its role in Asia. Moreover, after prioritizing other Asia-based security events over the years, China may be correcting course. This could be motivated by a desire to not be cut out of the narrative of the high-profile SLD and to capitalize on the unpredictability of the United States in Asia under the Trump administration. The U.S. administration has had a rotating door of top officials concentrating on defense and security issues, making it all the more challenging for Washington to express a consistent message about its commitments to Asia across different foreign policy decision making bodies (acting U.S. Secretary of Defense Patrick Shanahan is attending the SLD). In addition, the Trump administration’s recoil from multilateralism in both official and unofficial capacities also provides China with an opportunity to reassert itself within existing groupings: a real or perceived reduction of U.S. engagement with Asia at the regional level ensures an opening for China to take a more prominent role. As IISS Senior Fellow William Choong noted on Twitter, SLD 2019 is likely to witness the clash between a U.S. and Japan-led vision of the Indo-Pacific and China’s push for an Asia for Asians.

but essentially it will a clash of two visions – the US/ Japan-led ‘free and open’ Indo-Pacific and China’s ‘Asia for Asians’/ #BRI. Sino-US trade war will add another layer of complexity.

Separately, China’s Wei will reportedly meet with the United States’ Shanahan on the sidelines of the 2019 SLD. While many will hope that the pull-aside meeting can help diminish simmering bilateral tensions in one area, it is possible that differences and rifts between the Chinese and U.S. sides may be all the more visible in Singapore.