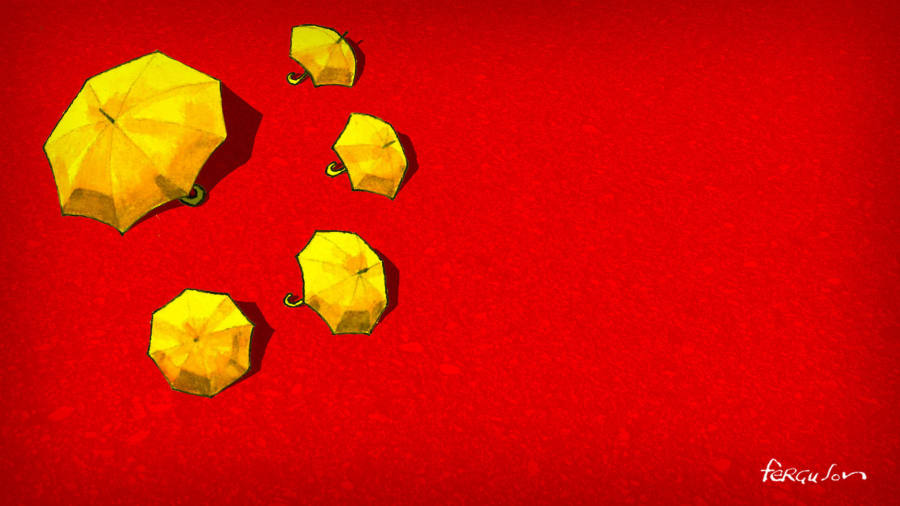 A spectre is haunting China, the spectre of democracy. The mass demonstrations that are taking place on the streets of Hong Kong have a significance that extends well beyond the territory itself. They represent the biggest challenge to the Chinese Communist party since the Tiananmen uprising of 1989.

The authorities in Beijing will be hoping that the demonstrations in Hong Kong fizzle out, allowing a gradual return to the status quo. Something like that happened after the “umbrella movement” protests of 2014.

But any respite is likely to be temporary. The essential dilemma is that ordinary Hong Kongers have no desire to live in an authoritarian one-party state. Their resistance to this fate could flare up again, at any time.

For President Xi Jinping, the ultimate danger is that the contagion of dissent spreads from Hong Kong to the mainland. Over the weekend, demonstrators made a deliberate effort to engage with mainlanders visiting Hong Kong.

If the Communist party gives in to mass demonstrations or allows proper elections in Hong Kong, that would raise the obvious question of whether similar moves could be permitted on the mainland.

Images of continuing unrest in Hong Kong will also dent the Chinese government’s carefully cultivated image of supreme confidence and competence. An inability to get a grip on events could make the Xi administration look weak and troubled.

In their defence, the Chinese government can claim that Hong Kong is a peculiar place, shaped by more than 150 years of colonial rule. Events there can be dismissed as having no particular relevance to the political future of the rest of China.

But the Beijing authorities’ actions suggest that they themselves do not entirely buy this idea. News of what is happening in Hong Kong has been largely suppressed in China proper. Hong Kong pro-democracy activists, such as Joshua Wong, have long been prevented from travelling to the mainland.

To the extent that the Chinese authorities can rationalise what is happening in Hong Kong to their own people, the default explanation will be to resort to nationalism. The demonstrations are already portrayed as whipped up by the west. And the demonstrators themselves will be depicted as unpatriotic and violent.

This kind of narrative will probably have considerable purchase in mainland China, where a generation has been raised on a nationalist narrative about avenging the indignities inflicted on China by the outside world during a “century of humiliation”.

But framing the Hong Kong issue as a question of national pride creates its own dangers for Mr Xi. It means that any setback there could be perceived as a national humiliation that endangers the sacred mission of the reunification of China. Rather than being the leader who wins back Taiwan (as he hopes), Mr Xi would risk becoming known as the man who lost Hong Kong.

These considerations now frame the tactical choices that Beijing has to make over Hong Kong. China has already tried making concessions. Carrie Lam, Hong Kong’s chief executive, agreed to suspend the proposed extradition law that provoked the original demonstrations. But Hong Kongers returned to the streets and a radical fringe partially trashed the Legislative Council, the city’s parliament.

Some in Hong Kong’s democracy movement argue that attacking Legco was legitimate because it is not a fully democratic chamber. They want all legislators and the chief executive of Hong Kong to be elected by one-person, one-vote.

But the Chinese authorities understand the precedent that such reforms would set for the mainland. And they also fear that a truly democratic Hong Kong might embrace pro-independence parties.

If the demonstrations continue, the alternative to reform is repression. But that is also a dangerous path. Mass arrests followed by imprisonment risks creating martyrs and a new cause for the demonstrators. Deploying Chinese troops on the streets of Hong Kong would lead to bloodshed — followed by an international backlash, economic sanctions, and a collapse in confidence in the economy of Hong Kong.

And it is not even clear that using troops would be effective against demonstrations of the size of those that have taken place in Hong Kong. You cannot shoot a million people.

Nonetheless, everything we know about Mr Xi suggests that he will ultimately use force rather than tolerate a persistent challenge to the authority of the Communist party. The Chinese leader has studied the collapse of the Soviet Union and concluded that the problem was weak leadership.

The Chinese regime reserves a special contempt for Mikhail Gorbachev, the leader who allowed the unravelling of the Soviet empire. When Mr Gorbachev visited East Berlin in October 1989 and witnessed anti-regime demonstrations, he instructed Russian troops there to stay in their barracks. That decision led to the fall of the Berlin Wall and is still regarded as evidence of weakness in Beijing. But Mr Gorbachev was not making a miscalculation. He was making a moral choice. Mr Xi may one day face a similar ethical crossroads.