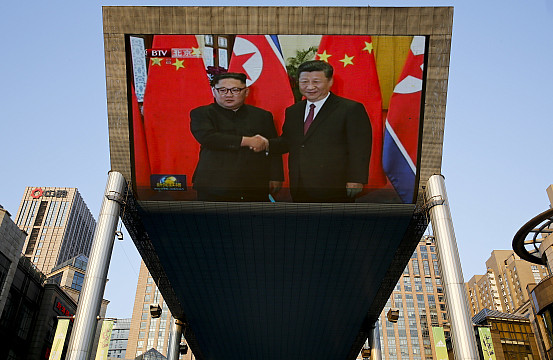 China’s President Xi Jinping will make his first state visit to North Korea this week, according to Chinese state media. Citing Hu Zhaoming, spokesperson for the International Department of the Chinese Communist Party’s Central Committee, Xinhua said Xi would be in North Korea from June 20 to 21, at the invitation of North Korean leader Kim Jong Un.

Xi and Kim’s first meeting came in March 2018, a full five years after Xi assumed office, and over six years since Kim became North Korea’s “supreme leader.” Since that belated meeting, the two sides seemed to be making up for lost time — Xi and Kim have met four times in the past 15 months. Notably, however, Xi has not yet made a trip to North Korea, despite reportedly accepting Kim’s invitation to do so in 2018. The last time the top Chinese leader traveled to North Korea was in 2005, when then-President Hu Jintao made the trip.

In fact, Xi broke with longstanding Chinese diplomatic precedent by visiting South Korea first. Generally Chinese leaders stop in Pyongyang before Seoul, but Xi made a 2014 state visit to South Korea, then under President Park Geun-hye, without even setting foot in the northern half of the Korean Peninsula. That was part of a warming trend in China-South Korea relations, while China-North Korea relations at the time seemed to be on ice.

Meanwhile, China and North Korea began a very public process of restarting high-level diplomatic ties amid Kim Jong Un’s broader diplomatic outreach in 2018. Kim made sure he held his first face-to-face with Xi ahead of high-profile summits with both Moon and U.S. President Donald Trump, and then Kim returned for conversations with Xi soon after his other summits. Now Kim will finally get his chance to host Xi in Pyongyang, as part of a celebration of the 70th anniversary of the establishment of diplomatic ties between the two sides.

Adding further complexity, Xi’s trip comes as both China and North Korea are experiencing tensions with the United States.

Kim returned empty handed from his second summit with Trump in Hanoi, Vietnam at the end of February. Since then, formal dialogue between the United States and North Korea has been on ice, as North Korea officials ominously warn that Washington needs to change its stance by the end of the year.

In Beijing’s case, the U.S.-China trade war is very much back on, and relations have been further aggravated by a ban on U.S. companies doing business with Chinese telecom giant and beloved “national champion” Huawei. Trump has made it clear that he expects to meet with Xi when both attend the G-20 summit in Japan from June 28 to 29, while the Chinese side has refused to confirm such a meeting is in the cards. If Trump and Xi do meet, it would be just over a week after Xi’s conversations with Kim – and whatever is announced in Pyongyang would certainly color the U.S.-China discussions.

Xi and Kim have previously discussed boosting China-North Korea economic ties, but no major announcements have been made as Pyongyang remains under strict United Nations Security Council sanctions.